Navy Cautious About Use of Virtual Reality Goggles in Training, Simulation 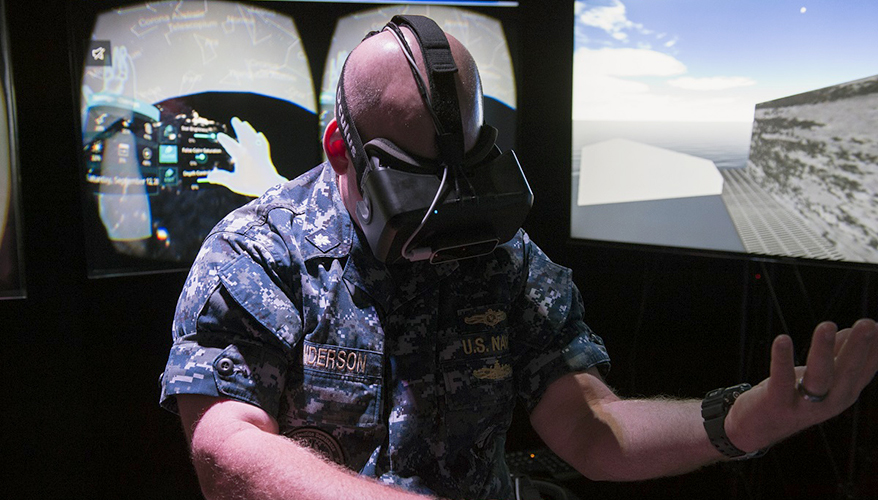 ORLANDO, Fla. — Navy researchers and program managers are excited about the prospects of integrating emerging virtual reality, augmented reality and mixed reality technologies into their training systems but say the quality of the systems are not where they need to be yet.

The service must resist “the cool factor” and not rush to acquire the new wave of technologies until it fully understands how they can be used and if they will actually improve training, Navy researchers said Nov. 28 at the Interservice/Industry Training, Simulation and Education Conference sponsored by the National Training and Simulation Association.

“The wonderful thing about VR right now is that the entertainment industry is driving this technology further and faster,” said Courtney McNamara, advanced gaming interactive environment lead at the Naval Air Warfare training systems division. It is investing large amounts of money and rapidly improving the quality of their products, and this development comes at no cost to the government, she added.

Virtual reality has some plusses and minuses for the military, she said. It provides a 360-degree view, and it is good at discerning sizes of objects and distances, McNamara said. However, it is is not good for manipulating small controls, tasks that are not controlled by the user and views that require high levels of detail, she said. It requires a much higher frame-per-second rate so users don't become nauseous, she added.

“Virtual reality is very cool and we all want to use it and we are excited to use it, but it is not always going to be the best fit for training solutions,” she said.

Heather Priest, senior research psychologist at the training systems division, said VR headsets are just a means of delivering training. "We want to make sure that the investment we are making in training will transfer to the real world," she said.

The technology is advancing so rapidly that there hasn't been a lot of good quality controlled research into the effectiveness of virtual reality, Priest added. “Just because it looks like the real world ... it is not necessarily something that is going to result in good training, especially if the technology is not where it needs to be.”

David Weiselthier, senior visual engineer at the training systems division, said simply boosting the resolution on VR goggles is not going to solve all the technical problems. The low-cost helmet mounted displays the commercial industry is producing have a lot of blurring. Looking only seven degrees off the center of the plastic lens — or up and down — results in dramatic loss of resolution. Fast moving objects are also prone to “smearing,” he said.

“Currently, the low-cost HMDs are not addressing this at all,” he said.

Motion sickness is caused by the brain being confused as the eye thinks it is looking at an object off in the distance but is actually focusing on a panel much closer, he said. “Your brain does not like that at all. It causes fatigue and eye strain,” he said.

“Very few low-cost HMDs are addressing the visual basics,” he said. They will have to improve before they can replace today’s high-fidelity flight simulators, he added.

“Can we build trainers that have a small enough footprint that we can deploy them? That is absolutely essential," he said. Sailors need to hone their skills while their ships are underway. There are many underserved communities in the Navy that do not have access to high fidelity training systems. Foster hoped the costs of VR can be low enough to expand training for skills and jobs.

Despite all these misgivings, the Navy needs to move ahead developing and improving these three related technologies, Foster said. “We have to get prototypes in the hands of the fleet, in the hands of the warfighters so they can try these things out, see what works, see what doesn't work, [and] incorporate their feedback on how we can and can’t use these devices.”

Re: Navy Cautious About Use of Virtual Reality Goggles in Training, Simulation

Most important statement in the article: "Virtual reality . . . is not always going to be the best fit for training solutions." As Program Managers we have to figure out the best way to deliver the curriculum. Sometimes it'll be VR, AR, or MR, sometimes a mobile app, sometimes a field exercise, and sometimes even a textbook. Wisdom is knowing the difference and looking past "cool."