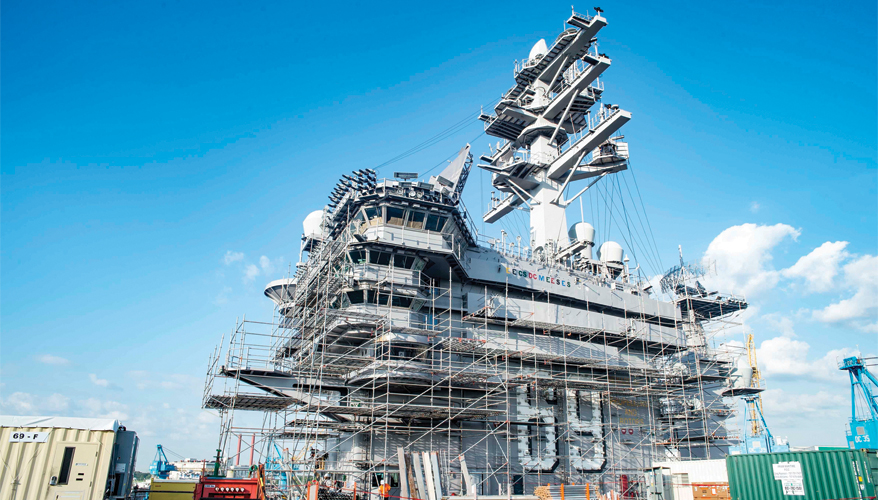 The subpar state of Navy shipyards is creating maintenance and operational challenges that will be costly to overcome, the Government Accountability Office warned in a recent report.

They are critical to maintaining readiness and supporting operations of the nation’s nuclear-powered aircraft carriers and submarines, the GAO noted in its report titled, “Naval Shipyards: Actions Needed to Improve Poor Conditions That Affect Operations.”

“Although the Navy committed to increased capital investment and developed an improvement plan in 2013, the shipyards’ facilities and equipment remain in poor condition,” the government watchdog said.

The cost of backlogged restoration and maintenance projects at the shipyards has risen to an estimated $4.86 billion, a 41 percent increase over five years. The backlog will take at least 19 years to clear, the report said.

“Partly as a result of their poor condition, the shipyards have not been fully meeting the Navy’s operational needs,” the report said.

The problems are projected to continue. “The Navy estimates that it will be unable to conduct 73 of 218 maintenance periods over the next 23 fiscal years due to insufficient capacity and other deficiencies,” the report said.

The nation’s fleet has already suffered extra wear and tear due to a high operating tempo and extended deployments during wartime, creating additional maintenance challenges, service officials have said.

The situation could get even worse, the GAO cautioned.

“The Navy estimates that it will need at least $9 billion in capital investment over the next 12 fiscal years, but this estimate does not account for all expected costs, such as those for planning and modernizing the shipyards’ utility infrastructure,” the report said. “Unless it adopts a comprehensive, results-oriented approach to addressing its capital investment needs, the Navy risks continued deterioration of its shipyards, hindering its ability to efficiently and effectively support Navy readiness over the long term.”

The watchdog recommended that the service develop a comprehensive plan to guide shipyard capital investment, conduct regular management reviews and report to Congress on progress in addressing the shipyards’ needs. The Defense Department concurred with all three recommendations.