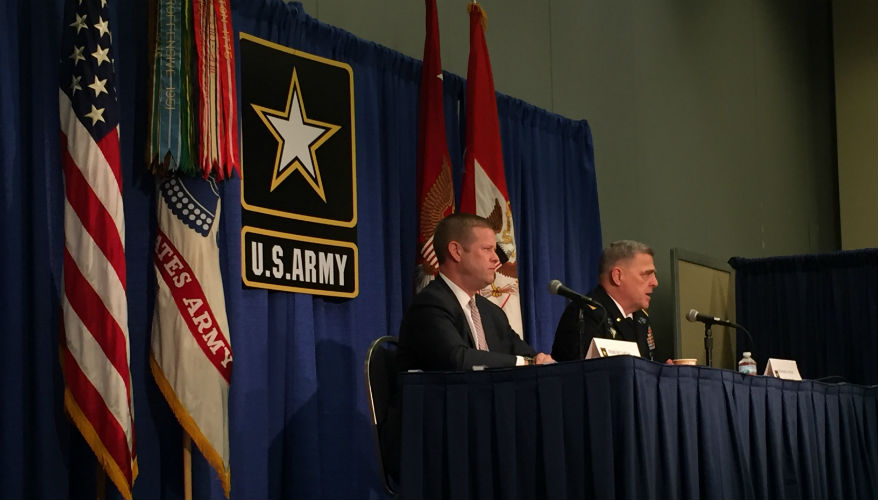 The Army will soon develop a new command to help the service streamline its acquisition priorities, the service’s senior official said Oct. 9.


A new task force will spend 120 days exploring how the forthcoming command could help the Army deliver crucial capabilities, including the next-generation combat vehicle and future vertical lift platforms, Acting Secretary Ryan McCarthy said at a media roundtable at the Association for the U.S. Army’s annual conference in Washington, D.C.


“This is a significant change” for the Army and requires both “careful and expeditious consideration,” he said, adding that the idea is to bring all service modernization efforts “under one roof.”


The new command will be formed from within the existing force structure, McCarthy noted. It could be stood up by the summer of 2018, he added.


Lt. Gen. Edward Cardon, who currently directs the service’s office of business transformation, will lead the task force in conducting the 120-day review set to begin sometime next week, he said.


Army Chief of Staff Gen. Mark Milley said during the roundtable that those priorities reflect how the service wins a war: by shooting, moving, and communicating, then protecting and sustaining its troops. Once completed, this effort would be the Army’s most significant restructuring of the past 40 years, he said.


“There is a gap” in the Army’s long-range fire capabilities that needs to be addressed, he noted. And the service’s rotary wing and tactical wheeled vehicle fleets are “essentially at the end of any kind of product improvements” the service can make, he noted.


The Army is currently working on a number of prototypes for the next-generation combat vehicle and expects to field a system in the late 2020s or 2030s, National Defense has reported. Bell Helicopter and a Boeing-Sikorsky team are demonstrating designs for the service’s joint multi-role technology demonstrator, a precursor to the future vertical lift platform that should also be fielded by the 2020s.


The Army will leverage new and emerging technologies, such as robotics capabilities or active protection systems, to enhance its future air and ground vehicles, Milley said.


Protecting the network is the next priority, “and we’ve been drilling down hard on that,” he noted.


Milley said that all network components, including command and control, communications and electronic warfare capabilities would fall under that priority section.


Ballistic missile defense is on the list because “we have ripped out our defense systems over the last 16 years,” he said. “We have got to create a layered defense around our combat formations” in order to fight in a multi-domained battlespace against near-peer competitors, he noted.


The Army also wants “to go to great lengths to increase the lethality of our soldier,” he said. That could include small arms capabilities, to upgraded body armor, to investments in synthetic training environments, he added.


Milley noted that the priorities were not set randomly. “They are put out there because we want to win — to win on the offense, to win by being a master of fundamentals,” he said.


The Army wants to take lessons learned from efforts such as the Rapid Capabilities Office that was stood up last year, as well as unsuccessful programs such as the Future Combat Systems, McCarthy said.


“The [Rapid Capabilities Office] is a foundational element where we want to scale that type of behavior and capability to the larger enterprise,” he said.


The service wants to enhance the role that warfighters will play in the prototyping and experimentation process in order to avoid situations like the Future Combat System’s identity crisis and ultimate cancellation eight years ago, he added.


“The requirements kept changing [for FCS]. … You didn’t understand the identity of the program,” he said. “The foundational element of what we’re trying to do is requirements definition and interpretation.”


But even as the Army is looking to make its own changes to the acquisition process, McCarthy and Milley both noted the role that Congress plays in balancing the budget in order to procure new equipment.


“Above all, the Army needs efficient, sustained and predictable funding, [and] the Budget Control Act and continuing resolutions cause uncertainty,” McCarthy said. “You don’t defend the country on a budget; you defend it on a strategy.”

I have been involved in leading major proposal efforts for defense contractors going after business with the DoD. I would like to be a part of this revision process, and certainly can help the Army (and all other branches, for that matter) with developing timely, accurate, understandable, and cost-effective Requests For Proposals, Invitations To Bid, and follow-up Amendments or other clarification documents, as required. For more than 40 years, I have maintained a 96% win rate on all the million and billion dollar efforts I led, and for which I did a major part of the writing and editing. I guarantee saving the Army untold thousands by producing documents that are easy-to-read and understand, and contain the correct technical and financial data for outstanding proposal results.

Anything that truly streamlines the acquisition process would be welcome, but the additional bureaucracy that will be created by a new command will undermine any effort at efficiency, particularly since it's highly unlikely that any current acquisition general officer slots will be eliminated. Efficiency could be greatly enhanced by less micromanagement from the Pentagon, this initiative goes in the opposite direction. As a result, it's likely to fail.