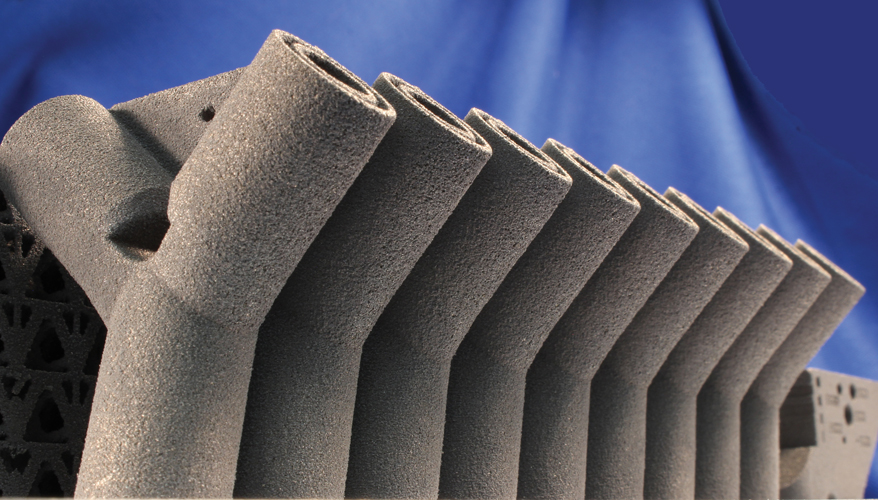 As additive manufacturing technology becomes more prevalent, engineers are now working on ways to 3D print different materials together to produce cost-efficient and sustainable parts for the aerospace industry.

Additive manufacturing involves the process of using modeling software and specialized equipment to build layers of material into a three-dimensional object.
Primes including Lockheed Martin and Boeing, sub-prime contractors and university and government laboratories are all exploring how to 3D print a component that contains elements of different materials, particularly metals. This could lead to parts that provide sturdiness in one area and thermal conductivity in others, cutting down on development time and making more durable products.

Applying additive manufacturing to create multi-functional materials would allow engineers to tailor design requirements and optimize the parts’ material accordingly, said Zach Loftus, an additive manufacturing fellow at Lockheed. The company employs 3D printing to build flight parts and tools for many of its space systems.

In traditional manufacturing, a component made of a high-strength material may be connected by a bolt or some other mechanism to a part designed to conduct heat, he explained. “In the future, I think you’re going to see some material systems that aren’t 100 percent the same through the entire structure,” he said.

Multi-material printing is still early in its development, said Mark Benedict, additive manufacturing lead for materials and manufacturing at the Air Force Research Laboratory. But the ability to create a multi-functional material — as opposed to making multiple parts with single functions and then assembling them together — “is a capability we would like to investigate,” he said.

Sensing platforms would benefit from such an integrated material, he noted. “That would be a real enabler.”

While potential applications are certainly being explored, “the capability to do that in a single printer is in its infancy,” Benedict said, adding that very few additive processing systems are currently multi-material capable. The ones that are capable, typically cannot produce the quality that is required yet, he added.

There are currently about 10 metals that can be printed via additive manufacturing, “compared to the thousands of metals you can put on a plane,” he noted. “So we have to be very selective about how we choose parts to print.”

Engineers at the Pennsylvania State University’s Center for Innovative Materials Processing through Direct Digital Deposition (CIMP-3D) have been working on ways to use additive manufacturing to meld different metals together into a single component, said Rich Martukanitz, center director. The CIMP-3D is operated by the university’s Applied Research Laboratory.

The lab is currently building a structural component for a U.S. Navy platform that requires corrosion resistance in certain areas, Martukanitz said. “We can tailor the substrate to be very strong … [and] add nickel-based materials only in the areas required for corrosion or wear resistance.”

But it remains a challenge to merge incompatible metals, such as aluminum and titanium, he noted.

There are cases where engineers would like to use mostly aluminum for a part because of its low density, but they specifically need the low weight and high strength of titanium in certain spots, and the direct combination can lead to issues from material incompatibility, he said. “So if you could join the two or create components [that are made of] titanium and in other areas aluminum, that would be a real game changer, and we’re working towards that,” he said.

CIMP-3D is developing a way to grade each material elementally, to avoid unwanted transitional phases when printing a new component.

“In some instances, you just can’t make an abrupt change from one material to another because of these metallurgic considerations. But if we grade them elementally, that gives us greater opportunities to mix components” with multiple materials, Martukanitz said.

“Applying additive to new designs [is] really where we’re going to see significant improvement” to Navy systems, he added. This could help give military platforms a longer life, he noted.

These emerging 3D printing technologies are now possible thanks to a steady stabilization of processes since the early 2000s, said Leo Christodoulou, enterprise technology strategy leader for additive manufacturing at Boeing Defense, Space and Security.

“There was and has been a continuous evolution and continuous development” in additive manufacturing, he said. “The processes of yesterday have always been different from the processes of today. … But in the last couple of years, we have seen some process stability.”

Boeing qualified and flew the first titanium structural 3D-printed part on a military program in 2003, according to the company. Additive manufacturing is playing a role in Boeing’s work in space, future vertical lift, tactical and heavy aircraft and spare parts, Christodoulou said.

The stabilized processes have freed engineers from design limitations they previously ran up against with traditional manufacturing, he said.

Cutting a curved line, for example, is much easier to do with additive manufacturing techniques, he noted. “The laser will go exactly where I want it to go, the same time, every time.”

One important aspect additive manufacturing provides is that engineers can create more complicated designs with very little impact on the cost of manufacturing, Martukanitz said.

That means manufacturers can optimize a part’s design to carry loads while reducing weight, or make one design that used to require multiple separate parts. “You can do all of that at the same cost,” he added.

The cost of creating complex parts is reduced with additive manufacturing, meaning engineers can design “really unusual looking structures at the same cost of doing straight lines,” Christodoulou said. For an expensive material like titanium, the buy-to-fly ratio — or the weight ratio between the raw material used in a component and the weight of the component itself — can be significantly lowered via 3D-printed parts, he added. 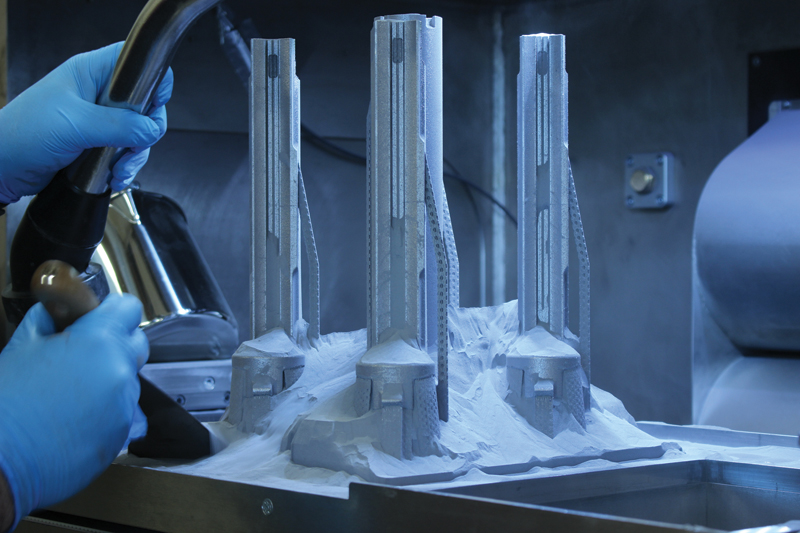 
Benedict agreed, noting that customers can purchase a large billet of titanium and “90 percent of that material will end up on the shop floor as scraps” using traditional subtractive manufacturing.

With additive manufacturing, “you really only print what you need and maybe just the slightest bit extra to get a better surface finish,” he said.

“There’s a tremendous amount of paperwork that follows each part,” he said. “If you reduce the number of parts by 90 to 95 percent, that’s a huge savings downwind.”

SAS Manufacturing has done that kind of work on retrofitted aircraft such as Special Operations Command’s AC-130 gunships, and on one-off aircraft that are being retrofitted for intelligence, surveillance and reconnaissance missions, he said.
Via additive manufacturing, “we can make extremely lightweight parts that are, in other instances, much stronger parts due to the additive process,” he said.

The new parts may not look the same as the ones they’re replacing, he noted.
Additive manufacturing “has become very efficient in the design, such that it doesn’t take too much material to meet the original strength or stress requirements,” Bulk said. The part may not always look “as pretty” as a traditional design, but it is stronger, lighter and more efficient, he added.

Martukanitz noted that Defense Department officials have said that for many legacy platforms, relatively simple components have extremely long lead times, with “planes sitting on the tarmac because it’s taking seven, eight, 10, 12 months to get very simple replacement parts.”

Benedict said that additive manufacturing has provided agility to create parts that are very challenging to make, without the tooling needed to produce those parts.

Platform sustainment takes up “the lion’s share of our budget,” he added. “Keeping a B-52 [bomber] in the air is challenging, given that most of the original equipment manufacturers are no longer in business.”

As the manufacturing industry invests more in 3D printing technologies, companies and laboratories are leveraging resources through America Makes, a public-private partnership looking to help its members compete globally in the additive manufacturing world.

Benedict, who serves as chief technology officer for America Makes, said the institute looks to “bring the American manufacturing community up to speed on using these technologies” and to “help industry to inject these technologies into their processes.”
Lockheed Martin is partnering with other members of America Makes to develop new materials for additive manufacturing, Loftus said, noting, “these are common problems.”

The key challenge for the future growth of additive manufacturing, however, remains the qualification and certification of its processes, Bulk said.

Relatively few 3D-printed components have been certified by the Federal Aviation Administration to be placed on aircraft or spacecraft, and standards are just being developed, he said.

Reutzel said that PSU’s Applied Research Laboratory is beginning to couple machine learning with process sensors to aid in monitoring a part’s quality throughout the additive manufacturing build. Engineers can then assess build quality in real time and adjust the process to repair or improve the product while it’s in progress, rather than relying solely upon quality inspection once it is complete.

“That’s going to give people that are producing parts that are going to be used in critical applications higher reliability and less uncertainty of the part itself,” he said.
Lockheed Martin is looking at ways to incorporate additive manufacturing into complementary automated technologies by creating “robot clusters” that can provide quality control and monitoring, Loftus said.

“If you can imagine one robot doing additive, one doing subtractive, one doing inspection and one doing pick and placement of parts in a cell … that’s kind of the vision that we have for future automation,” he said.

Christodoulou said qualitative testing and control remain an area that requires further maturity before it can be fully exploited. “I see significant opportunities to improve those … from where we are today,” he said.