Mattis Should Win Confirmation, But Can He Win the Coming Budget Wars? 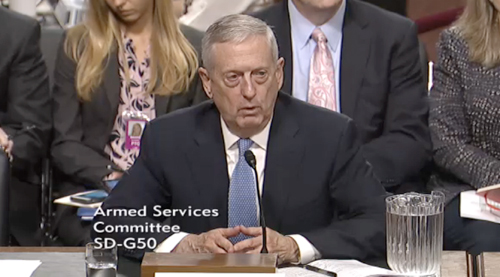 Defense Secretary nominee James N. Mattis said one of the first orders of business, if he is confirmed, will be to figure out how much money the Pentagon needs to accomplish its mission. His motto: Solvency and security.

Mattis was adamant in testimony to the Senate Armed Services Committee that the Pentagon needs more funding, although he was vague about what specific increases he would recommend. He repeatedly told senators during his confirmation hearing that current limits on federal spending set by the Budget Control Act are damaging to the military and must be repealed. But he also showed empathy for congressional fiscal hawks and assured them that he would aggressively pursue business reforms to reduce bureaucratic bloat and eliminate wasteful programs.

The retired Marine Corps general, who is widely respected and was lobbed mostly friendly questions from the committee Jan. 12, is expected to be confirmed as the Trump administration’s next Pentagon chief. Congress will first have to approve an exception to a law that bans the appointment of retired officers as secretary of defense within seven years of retirement from active duty. Mattis retired in 2013 after a 41-year career in the Marine Corps.

Known as a thoughtful strategist with a keen understanding of the global security threats the nation confronts, Mattis laid out to the committee a compelling case for a larger Pentagon budget, and offered many of the same rationales that Obama defense secretaries Robert Gates, Leon Panetta, Chuck Hagel and Ashton Carter had articulated in years past before Congress in mostly fruitless efforts to get relief from the Budget Control Act.

Unlike his predecessors, however, Mattis would be taking over the Defense Department in a more favorable political climate, with Republicans in charge — although the GOP on Capitol Hill remains internally divided on spending priorities. Mattis said he sees as one of his major challenges to “determine, request, and allocate the resources necessary to strengthen our military, while earning the confidence of the Congress and the American people that the Department of Defense is a good steward of taxpayer money.”

He listed as his priorities to improve the readiness of the force and bring “business-minded reforms to the Department of Defense.” This effort would include a “review of what, why, and how we are buying things.”

The discretionary caps imposed by the Budget Control Act are in effect through fiscal year 2021, unless there is agreement to change budget levels. Mattis insisted that the caps are weakening the military and, if they stayed in place, the military would have to retrench from global responsibilities.

“We have a strategic mismatch between the political ends we espouse and the military means we have available to confront and deter threats,” he said in prepared testimony. “While our military remains the best fighting force in the world, these cuts have created damage that will take time to repair. Unless the Department of Defense receives funds above the caps imposed by the Budget Control Act, it will not be able to achieve the readiness, modernization, and force structure required to meet emerging threats.”

Rolling back the spending caps will provoke a heated political fight, as congressional Democrats will demand equal relief for nondefense agencies. Mattis, like President-elect Trump, does not believe in the “dollar-for-dollar” rule that was used by the Obama administration to negotiate budget deals in 2013 and 2015.

Mattis argued that legitimate requirements should drive budgets. “While the solvency and security of the U.S. go hand-in-hand, I believe budgets should match resources to national priorities. Each department and agency must define and justify its requirements.”

One nondefense agency that Mattis wants to see better resourced is the State Department. He is long-time champion of investing in civilian tools of development and diplomacy. As the combatant commander who oversaw the entire Middle East and Central Asia, he told the Senate Armed Services Committee in 2013: “If you don’t fund the State Department fully, then I need to buy more ammunition.”

Mattis sees soft power as an essential weapon that ultimately helps prevent shooting wars. “All elements of national power must work in tandem to support national priorities — in particular, our diplomatic efforts must be sufficiently funded if we wish the military to be employed generally as a last resort,” he said in SASC testimony. “A process that imposes budget rules first, and matches resources to national priorities second, is inherently limiting and inflexible.”

The adequacy of Pentagon funding, he said, would be measured by “our ability to execute our chosen strategy, maintain the nation’s technological edge, preserve the health of the joint force, and provide options to the president.”

The political environment today in theory would favor bigger defense budgets, but the reality is more complicated.

Jack Deschauer, a defense industry lobbyist at Squire Patton Boggs, noted that Congress has not yet passed an appropriations bill for 2017, even knowing that funding by continuing resolution is damaging to the Defense Department and the defense industry because new programs can’t be started. “I don’t know where it’s going to go,” he told National Defense. “There are competing power sectors.”

Trump’s budget director is a deficit hawk who may resist defense spending increases. The incoming president also has ambitious tax reduction and infrastructure investment plans that could derail efforts to increase defense. “It’s impossible to do everything,” Deschauer said. “In the short run, DoD will go up. Through reconciliation they will remove sequester. But I expect Republicans will move to cut domestic spending to fund defense. But I don’t think it will go up as much as some people thought it would increase.”

The current five-year defense budget is $107 billion above the BCA limits. Unless Trump can negotiate a deal with Congress, the Pentagon will have to cut spending by $21 billion a year starting in 2018. The modernization of the U.S. nuclear arsenal — which Trump has indicated he will support — will require an additional $17 billion a year from 2022 until 2043.

Lou Crenshaw, a retired Navy vice admiral and defense industry consultant, noted that the same budget pressures that dogged Obama will continue. Trump will have to tackle mandatory entitlement programs that account for the bulk of government spending, and figure out how to pay for planned tax cuts. Even if every Pentagon procurement program were wiped out, that still would not begin to make a dent in the problem.

Mattis said he would push for aggressive internal reforms that could ease pressures on runaway costs at the Defense Department. One area of concern is health care. DoD requested $47 billion for the military health system in 2016. The Congressional Budget Office has calculated that those costs will reach $64 billion by 2030.

“When internal costs rise faster than the topline growth, the Department will be forced to shortchange war fighting,” Mattis wrote in prepared testimony. “In the nation at large, the rising cost of health care continues to outpace inflation by double digits. The same math applies to the Department of Defense,” he noted. “This is a complex issue.”

A similar conundrum exists regarding personnel costs. Military personnel costs, as a percentage of the overall DoD budget, have remained consistent for the last two decades at 30 percent while the size of the force continues to decrease. “We must support our force and structure our pay and benefits in a way that continues to benefit recruiting and retention,” said Mattis. “But the best support we can give service members is to equip and train them properly.  If the defense budget flattens or declines in real terms while this percentage remains constant, the Department of Defense will face major challenges in defending the nation’s vital interests.”

Mattis said that regardless of the topline, the Pentagon should invest in research and innovation. “Those areas identified in the development of the Third Offset strategy are worthy of investment,” he said. “If confirmed, I will seek new options for simplifying and improving the success rate of putting new technologies into production. … I will review the current portfolio of technologies under development and ensure that those provide the nation with long-term technological superiority.”

And like his predecessors, Mattis will push for acquisition reforms. “Poor acquisition outcomes are forfeiting U.S. technology advantages and depriving the nation of strategic capabilities,” he wrote. “The fundamental challenge for the defense acquisition system is to deliver integrated hardware and software platforms that change on a routine basis. I will seek to establish a culture of innovation across the department.”

Mattis defended Trump’s criticisms of the F-35 as being too expensive. He called the F-35 a “critical capability” for the armed forces and for many U.S. allies. Trump supports the program, he said, but wants “bigger bang for the buck.”

During an exchange at his confirmation hearing, Mattis couched the looming fiscal dilemma in blunt terms: “We have to adapt the military to fiscal realities. But we can't fix our national debt problem on the back of our military.”