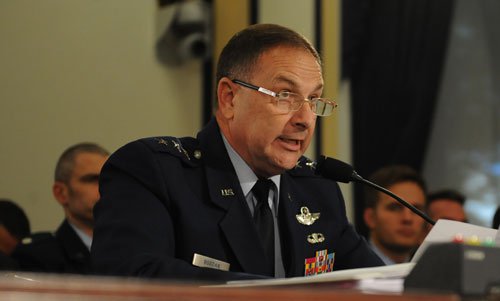 When the Pentagon embarked on the acquisition of the F-35 joint strike fighter in 2001, little thought was given to who legally owned the rights to the technical data and intellectual property associated with the aircraft.

Fifteen years later, the lack of clear contractual language about ownership of technical data and software code has put the Pentagon in a bind and has limited the government’s options on how to maintain, upgrade and manage the Pentagon’s largest weapons acquisition, according to the officer who runs the F-35 program, Air Force Lt. Gen. Christopher Bogdan.

“I am playing catch-up now every which way I turn when it comes to intellectual property rights in the F-35 program,” Bogdan told a group of government and industry executives who are reviewing the existing body of laws and regulations regarding rights in technical data.

Bogdan spoke in stark terms about the frequent disputes over intellectual property rights that he has witnessed during four years at the helm of the F-35 program. The rights to technical data — an arcane and complex issue even for industry and contracting attorneys — have become an increasing source of contention in military weapon programs as the Defense Department finds it has to defer to contractors on many equipment-related decisions because the manufacturers own those rights.

The 16-member panel, led by former Pentagon acquisition official Richard Ginman, was mandated by Congress to examine the current technical data rights law — U.S. Code Title 10, sections 2320 and 2321 — that serves as the legal basis for deciding whether the Pentagon is entitled to technical rights to products that it is buying for military use.

In hindsight, said Bogdan, had the government laid down rules on IP rights in the original F-35 contract awarded to prime contractors Lockheed Martin and Pratt & Whitney, the Pentagon could have avoided massive expenditures over the projected 50-year life of the program. Because contractors and subcontractors have tight control of the intellectual property — from the software to major components and spare parts — the Defense Department has limited authority, for instance, to integrate new systems into the aircraft or do routine maintenance work in government depots. “What I’m experiencing is the classic example that if you don’t think about this upfront you’re dead in the water at the back end of this,” he said. “We didn’t think much about this upfront in the F-35. We didn’t write anything into the contract very well.” To this day, he added, “We don’t train our program managers, contracting officers, or even our lawyers that advise us on what this monster is.”

Bogdan insisted that he was not blaming the private sector for this predicament. The government, he said, created its own problems when it decided in the 1990s to transfer responsibility for major programs to contractors. The preferred approach back then was “TSPR,” said Bogdan, using an acronym for total systems performance responsibility. “Industry was given a broad set of requirements and the government was pretty much hands off,” he said. “The thought was: If we removed specs and regulations we would get stuff faster and cheaper. I think that was somewhat of a dream. And we’re living that with the F-35 every day.”

Under the TSPR model, assertions on data rights were nonexistent. In the F-35 program, the contractors created a shared computer system called JVE, or joint virtual environment, where they agreed to dump all the data. “Everything that the government would need would be placed in the JVE,” said Bogdan. That arrangement worked for a while but eventually it became clear that there were limitations in what the government could do with that data and, in many cases, the Pentagon would have to pay extra for data categorized as “deferred ordering,” that needed to be scrubbed or reformatted.

“The JVE worked until we started getting into some tense situations when the government started asking for more than industry thought it needed to deliver,” he said. Over many years overseeing weapon development and procurement programs, Bogdan observed, it has always been puzzling to him why contractors are so reluctant to turn over data rights to the government. “We’re in a position now where we have to fight tooth and nail to get what we want,” he said. The friction is not just with prime contractors but also subcontractors that, in the case of the F-35, provide a significant portion of key components.

It was another lesson learned that unless subcontractors agree upfront to turn over data, the government will have little legal recourse down the line. If the Pentagon wants to write training manuals, modify or repair a system, it needs so-called OMIT data, short for operations, maintenance, integration and training. “When we want to bring systems into depots, if those clauses weren’t flowed down the supply chain into the contract, we got a fight on our hands.”

Bogdan immediately figured out that suppliers would fight fiercely to shield their trade secrets because they did not trust the government and feared that their proprietary data would be shared with other industry competitors. Companies view technical data rights as their ticket to securing long-term maintenance work which is often considered even more lucrative than development and production. In private meetings with executives, Bodgan said, he was told that companies regarded technical data rights as “crown jewels” that shareholders demanded be protected.

The Air Force C-17 cargo aircraft program offers a cautionary tale. Initially when the program started in the 1990s, the plan was that it would be maintained by the contractor for life, so there was no need to ask for OMIT data. Years into the program, the Air Force decided that contractor-provided maintenance was unaffordable, Bogdan said. The service sought to move the work into its own depots, and “when they started doing that, there was no foundation on IP and data rights. There were mighty struggles. I’m experiencing some of that in the F-35 today.”

His advice to program managers: When you start a program you should think long and hard about this. Although the future can’t be predicted and no one size IP policy fits all, it behooves the government to try to secure some level of data rights upfront in every program, Bogdan said. “You’re not sure what the government will need so you ought to get as much as you can upfront.” Paying a contractor at the front end for the intellectual property might be expensive, he added, “but not more than it will cost you later.”

How to handle intellectual property rights is a tough problem that the Pentagon has recognized, but has limited means to take on. The F-35 joint program office has more than 2,000 personnel overseeing a $400 billion program and yet, “I can count on one hand the number of people who understand this enough to go up against Lockheed Martin and get what the government needs,” Bogdan said. “We are overmatched,” he added. “It’s just not a fair fight.”

In fairness to contractors, though, the government often has been an ineffective negotiator on data rights, Bogdan noted. “The Department of Defense has some unrealistic expectations on IP rights. A lot of people out there, many who work for me, think we should get it all. That we paid for this, so we should get it all.” At the other end of the table are the contractors “with lots of smart lawyers and program managers that play hardball.”

There has to be “something in the middle that gets the department what it needs and at the same time protects industry from whatever industry is worried about,” Bogdan said. “Sometimes I cannot figure out what industry’s motivations are. Are they truly worried that we are going to take the IP and hand it to one of their competitors?”

Bogdan has been impressed by how different companies deal with IP issues. Contractors that work in the commercial market are more straightforward in laying down their demands upfront. “When I work with companies that are purely DoD, it’s a lot murkier,” he said.

Ginman, who is leading the panel that later this year will propose a long-term fix to the Pentagon’s IP struggles, suggested that the military services need to do a better job explaining to contractors why they need the data and how it will be used. “We have an insatiable desire to not explain what we need,” he said. “We don’t articulate things upfront.”

Bogdan agreed, and offered that the industry is just as guarded on IP matters. “You folks talk in hieroglyphics,” he told executives on the panel. “You don’t really want to tell us what your real motivation is.”

Panel member Bill Elkington, intellectual property counsel at Rockwell Collins Corp., pointed out that contractors often are asked for “unlimited or government purpose rights in technical data,” which companies resist because it puts at risk their aftermarket business.

“I’m not trying to take anyone’s business away,” Bogdan said. “But if I have an F-35 on an aircraft carrier out at sea, I can’t call on you to repair that part in Charleston, South Carolina. The Navy has to be able to repair that part on the ship. I need the technical data so I can build the repair capability.”

In that case, a simple licensing agreement for repairs might be the answer. “If we’re not asking for that specifically, shame on the government for not telling you that,” Bogdan said. “There are solutions out there.”

One of the biggest IP headaches the Pentagon faces is how to maintain and update software across every program. “There’s a fairly big understanding gap on software and how the department wants to handle that,” he said. “That is where DoD could help by giving a broad vision. There is not a system out there that doesn’t have software. … And the industry is using that gap to their advantage sometimes.”

In the F-35 and many other cutting-edge systems, the software is the secret sauce. What Bogdan often hears from contractors: We are never going to give you that source code. He can understand why, but still finds it frustrating that the government does not have rights to the operational flight plan, or OFP software which enables that system to perform interactive tasks. Bogdan has sought rights to the OFP to build training devices, for example. Suppliers have pushed back on grounds that some of the code was developed at their expense. “Then I have to disprove that it wasn’t. I have to get a group of people and do a forensic autopsy on when that software was created.”

Such IP squabbles are disruptive to programs. In the F-35, he said, “I want to use the OFP in a different environment than the airplane or simulator, I want to create a virtual constructive environment that is not a Lockheed Martin product. But I need the interface to take the OFP and put it into a different environment, and I can’t get there,” he said. That is another illustration of how the training needs of combat units today and the technology available to train could not have been predicted 15 years ago. “We ought to be able to somehow accommodate that change. That applies to both sides.”

Despite his grim assessment of reality, Bogdan offered some words of encouragement to Ginman’s panel. “I applaud you for trying to put some clarity in the way the government deals with this,” he said. “It’s sorely needed.”