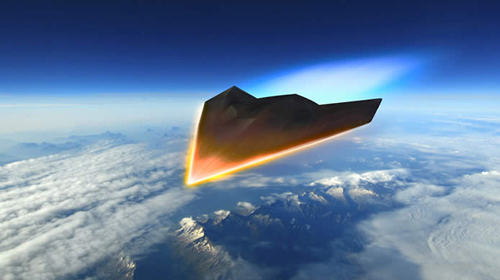 Artist's rending of a hypersonic missile

Between fiscal years 2011 and 2015, the Pentagon spent $27.8 billion on the portfolio, according to a recent report by analytics firm Govini. The Defense Department estimates that it will spend about $18 billion on the initiative over the next five years.

There is no official third offset spending account in the Defense Department budget, so classifying particular items as such can be a subjective exercise.

Between fiscal years 2011 and 2015, spending on hypersonic technologies saw the largest relative growth, increasing by a whopping 98 percent to a total of about $200 million, the report said.

Hypervelocity projectiles (HVP) can travel at a speed of Mach 3 or faster. They can be fired from an electromagnetic rail gun or conventional 5-inch guns on combat ships.

“One advantage of the HVP/5-inch gun concept is that the 5-inch guns are already installed on Navy cruisers and destroyers, creating a potential for rapidly proliferating” hypersonic weapons across the force, naval analyst Ronald O’Rourke said in a recent Congressional Research Service report.

Pentagon leaders have identified hypersonics as a promising area for future investment.

“The spending trends … will continue their steep climb, especially as the technology continues to be used for strategic signaling between the U.S. and China,” the Govini report said.

According to the report, spending on directed energy technology, which the authors called the “flagship initiative” of the third offset, grew by 23 percent in fiscal year 2015 relative to the previous four-year average — reaching a total of approximately $600 million.

Key congressional staffers have applauded the way the Defense Department is pursuing the third offset.

“You can have transformational outcomes through an incremental process where you fund a lot of … investments — some of which pan out, some of which don’t,” said Chris Brose, staff director for the Senate Armed Services Committee, during a recent press conference.

He praised Pentagon leaders for reaching out to different innovation centers that are conducting “game-changing research” instead of deciding to “place sort of a huge bet and put all your eggs in one basket.”

Bob Simmons, staff director for the House Armed Services Committee, noted that the initiative isn’t tied to a large program of record.

“It’s a whole bunch of little independent programs that all fit” into the strategy of pursuing a wide range of cutting-edge technologies, he said.

Budget Analysts: ‘Efficiencies’ Won’t Cut it, Could Backfire on Pentagon