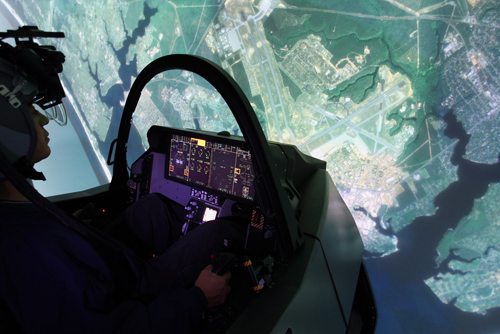 The steady growth of military-focused simulation, training and gaming industries over the past five decades has been a good-news story for the state of Florida. The sector is fueled by Defense Department contracts overseen by 3,000 military officials and government employees based in the Orlando area.

That success, though, has made the area the target of Pentagon budget cutters who want to move government workers from expensive commercial office space onto military bases elsewhere in the United States that are currently underused. Fears of losing those government jobs propelled an advocacy group called the Central Florida Partnership to work behind the scenes with state officials to secure funding to build an office park for defense workers.

The Florida legislature approved $42 million over three years for the office park, and the goal is to relocate 3,000 workers who currently occupy 200,000 square feet of leased commercial space, said Thomas Baptiste, a retired Air Force lieutenant general and president of the National Center for Simulation, based in Orlando.

Baptiste said a shortage of government-owned office space has become a “critical vulnerability” for Orlando’s simulation industry because commercial leases are costly and the Defense Department could easily decide to relocate those workers. That would not only mean the loss of 3,000 government jobs but also the potential exodus of contractor firms that would follow their customers wherever they might go.

The state has chosen to preemptively build an office park and protect those jobs from upcoming rounds of base closures or realignments, Baptiste told National Defense. This would “mitigate the risk that they could be realigned, with or without BRAC, as a cost saving measure.”

Congress has made it known that it would block any Pentagon proposals to close military bases in the United States. But the Defense Department does not need BRAC authority to relocate workers as part of cost-cutting efforts.

The core of the defense simulation and training workforce resides at the Naval Support Activity Orlando, which opened in 1988 as the home of the Naval Air Warfare Center Training Systems Division. NAWCTSD Orlando is the Navy’s epicenter for modeling, simulation, and training systems technologies. Over time, that operation expanded and today NSA Orlando hosts military training and simulation programs from across the armed services. One of the largest additions was the U.S. Army’s Program Executive Office for Simulation, Training, and Instrumentation.

When office space on the base ran out, organizations started spilling out into leased facilities. The rent costs in recent years got the attention of the Defense Department and the military services, and stirred fears in Orlando that the simulation and training government offices might be moved. Allowing these groups to relocate into state-owned buildings will reduce their rent bill in Orlando by 80 percent, said Baptiste. “They would pay only for the common areas’ maintenance cost.”

“We have to set the conditions to continue to grow this industry,” said Baptiste. Keeping the government labs and procurement offices in Orlando is essential in order to retain the large population of contractors that has boomed in Central Florida. The Army’s training systems unit alone, for instance, brings $2.3 billion worth of spending power. If the Army chose to move those workers to another state, the contractors would flee, Baptiste said. “If the industry is in the research park, it’s because that’s where the contracts are. And if the contracting workers moved, the companies would relocate.”

Central Florida’s emergence as the capital of the military simulation industry started 52 years ago when the Navy moved its training center from Long Island, New York, to Baldwin Park. That facility was shut down by BRAC in 1995. The Florida legislature then moved to build a research park in the southern perimeter of the University of Central Florida. “They realized you’re not going to attract the R&D money and the industry unless there’s a draw, an anchor tenant. The idea was to give the Department of the Navy 40 acres of land to build a center of excellence for simulation and training.”

Other agencies later were drawn to the area to be part of this “collaborative environment.”

Every major defense contractor — including Lockheed Martin, Raytheon, Northrop Grumman and L-3 — has a significant presence in Orlando, Baptiste said. The industry is no longer just producing training “devices” like flight simulators, he said. Gaming and software are driving growth of late. Companies are stepping up international sales and branching into the health-care training sector.

Central Florida’s defense industry has solid support in Congress, Baptiste said. A key advocate is Rep. John Mica, R-Fla., whose district includes Orlando. The industry, though, was dealt a big political blow last month when Rep. Randy Forbes, R-Va., lost his primary. Forbes was one of the simulation and training industry’s most ardent supporters, Baptiste said. “There was no one more knowledgeable, more active and more engaged in promoting modeling and simulation for training than Forbes.”

No doubt the industry will be losing a key “Washington voice,” Baptiste said. Forbes founded the modeling and simulation caucus, which lists 30 members. It is not clear who might be stepping up to lead the caucus next year, said Baptiste. “Forbes will be missed. I don’t know what will happen to the caucus.”

Despite Fiscal Pressures, Demand for Virtual Training on the Rise