War Funding Battle Could Rage Into Next Year 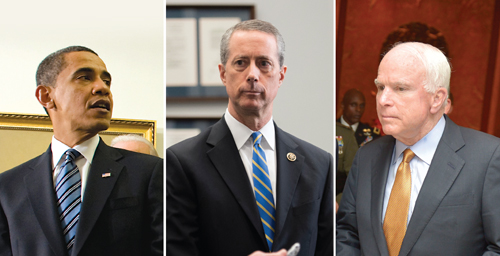 The controversy surrounding overseas contingency operations funds has pitted the White House, Senate and House of Representatives against one another. The political battle over OCO accounts might not be resolved until the next administration takes office in 2017, a leading budget analyst said.

The House version of the fiscal year 2017 National Defense Authorization Act diverted $18 billion in war funds for base budget projects such as readiness, higher force levels and additional weapons procurement.

To adhere to spending levels agreed to during a previous budget deal, the legislation would only fund ongoing war efforts in Afghanistan and elsewhere for seven months. Republicans on the House Armed Services Committee appear to be banking on the assumption that the next president and Congress would be compelled to pass supplemental war funding next spring.

“The legislation seeks to ensure that we do not deploy troops who are not fully trained, whose equipment is worn out and who did not get the resources they needed back home to be ready to face our enemies overseas,” HASC Chairman Rep. Mac Thornberry, R-Texas, said in a press release after the full House passed its version of the NDAA in May.

The Obama administration has threatened to veto any NDAA passed by Congress if it includes the House OCO provision.

“By gambling with warfighting funds, the bill risks the safety of our men and women fighting to keep America safe, undercuts stable planning and efficient use of taxpayer dollars, [and] dispirits troops and their families,” the Office of Management and Budget said in a statement.

Todd Harrison, director of defense budget analysis at the Center for Strategic and International Studies, said the veto threat is credible, noting that President Barack Obama previously vetoed an NDAA over a disagreement with Congress about OCO funding.

On the Senate side, Sen. John McCain, R-Ariz., failed to pass his amendment which would have added $18 billion to the Senate version of the NDAA on top of the $59 billion that the Obama administration requested for OCO.

To still have a chance of becoming law, Thornberry’s provision would have to survive a conference to reconcile the House and Senate versions of the NDAA. It’s unclear how that process would play out, Harrison said.

“In the horse trading that happens during conference, I think it’s going to be pretty unpredictable to know what the House gets to keep and what the Senate gets to keep, and this could very well be one of the issues that’s traded,” Harrison said.

The House and Senate versions of the legislation take different approaches to major policy areas such as acquisition reform and military health care reform.

OCO funding “could get tied into negotiations over many other issues,” Harrison said. “There are likely to be a number of big disagreements.”

If Thornberry somehow gets his way, it could hand fiscally conservative Republicans a difficult dilemma next year, he noted.

“If it’s a Democratic administration and if Democrats control the Senate, that [supplemental war funding bill] will be a must-pass piece of legislation and [Democrats] may decide to tack onto it additional non-defense spending,” Harrison said. “That would put Republicans in the House in a really tough position because do they really want to be voting against actual war funding in a bill … because of whatever else the new administration might tack onto it?”