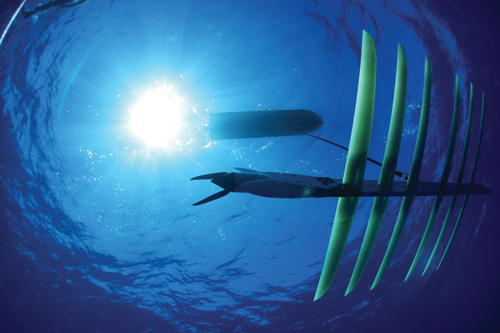 Liquid Robotics, the maker of an unmanned surface vehicle known as the Wave Glider, is reaching out to countries around the globe for new business opportunities.

The Wave Glider uses renewable energy to stay afloat for a year at a time, said Gary Gysin, president and chief executive officer of the Sunnyvale, California-based company.

It can collect persistent intelligence, surveillance and reconnaissance information and can also connect with underwater drones or unmanned aerial vehicles.

“Our goal … is to be that surface level gateway between what’s going on undersea and communicating to other assets, whether that be manned or unmanned assets,” Gysin said.

There has been strong interest in the system abroad, he told National Defense.

The company has sold it to 15 countries worldwide and there are plans for expansion, he said.

Currently, many nations patrol their waters using expensive manned aircraft or ships, he noted. “Why not have a robotic fleet that’s patrolling and [then] if you find something you send the expensive asset out to interdict?

“The problem is that a lot of these countries don’t have the navies [or] the air forces that we have, and yet they have a problem either over fishing or refugees. There are all sorts of different things going on. They want to patrol their waters and know what’s happening,” he said.

The company has had success in Asia, he noted. It has sold systems to Indonesia, Japan, Thailand and Australia.

Over the last six months the country has increased its efforts in South America, which has homogenous concerns to that of many Asian countries, he said.

“Obviously anybody that has large territorial waters has similar issues,” he said. “South America has … been a hot spot of drug running and also illegal fishing.”

In April, Liquid Robotics entered into a partnership with Ingenieros Electrónicos Asociados, an Argentina-based supplier of oceanographic electronics and naval communications. The move will help Liquid Robotics reach out to customers in Argentina and Uruguay.

“They’re a local reseller and we’ll typically work with someone that is in country,” Gysin said. IEA will help the company set up meetings and introductions, he said.

Navy’s Ice Exercise Kicks Off in the Arctic

Sailor-Less Ships Soon Could Be a Reality in U.S. Navy