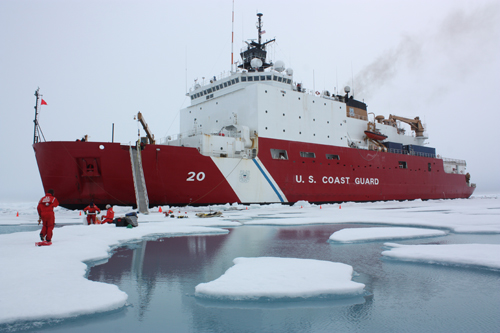 Despite a perceived rivalry between the United States and Russia in the Arctic, the Obama administration has taken a conciliatory approach when it comes to the rapidly changing region.

Retired Adm. Robert J. Papp — the State Department’s special representative for the Arctic and former commandant of the U.S. Coast Guard — June 9 described Russia’s continued buildup of its Arctic infrastructure as non-threatening at a panel discussion sponsored by the Center for Foreign Relations in Washington, D.C.

“Russia’s development in the Arctic is defensive in nature and in protection of their sovereignty,” Papp said. “The Russians are actually developing infrastructure in ways that I think the U.S. should be doing in Alaska.”

The closest U.S. Coast Guard station to the Bering Strait lies 800 miles away, and the lack of deep-water ports and airfields in Alaska puts the United States at a disadvantage compared to its Arctic neighbors, Papp said.

“Most people in the world want to look at the Arctic situation with Russia through the lens of the Ukraine issue, which is fair,” Papp said. “But we need to be objective when it comes to their Arctic activity. North America is actually lagging.”

Security issues are not raised in the Arctic Council, where the United States and Russia are both permanent members, along with Canada, the Kingdoms of Denmark, Norway and Sweden and the Republics of Finland and Iceland. The intergovernmental forum was formed in 1996 with a goal to promote cooperation, coordination and interaction among the Arctic states and indigenous Arctic communities.

“Bringing defense issues to the Arctic Council will most definitely break down the relationship we have built with Russia concerning the Arctic,” Papp said. “Russia has legitimate claims to a huge northern ice shelf, so we need to take their concerns into consideration without losing that peace we have built.”

Yet the caveat for the United States, as Papp pointed out, is the Bering Strait, which both the United States and Russia have claims over. There are various routes to take when crossing the Arctic to Europe and Asia, but they all converge at the strait on their way back to the Atlantic.

“There is an economic advantage to shorter sea routes, and public and private sectors from both countries have interests there,” Papp said.  Increased maritime traffic will continue to be a point of contention for both the United States and Russia once the northern routes melt away for good, which he believes will eventually happen.

“American security should be looked at as food and water security for subsistence communities in the Arctic,” Brzezinski said. “We are constantly being shocked by broken [temperature] records — we need a pan-Arctic approach to fully understand what is going on.”

“We have a science and cooperation agreement in the works with Russia and I anticipate success,” Brzezinski said. “It’s a good example of a tangible product for the American people from a consensus based organization.”

The Arctic remains simultaneously a strategic issue for nations and a everyday challenge for the people who live there. The two governments will have to continue their current pattern of agreement if peaceful negotiations for the region’s future has any hope of fruition.

“What happens to the Arctic doesn’t just stay in the Arctic anymore,” Brzezinski said. “It affects everyone all around the world.”
Correction: an earlier version of this story omitted Canada as a member of the Arctic Council.

Official: Other Countries Are Questioning U.S. Commitment to the Arctic

Top Five Threats to National Security in the Coming Decade

Nations Will Not Go to War Over Arctic Resources, Author Says