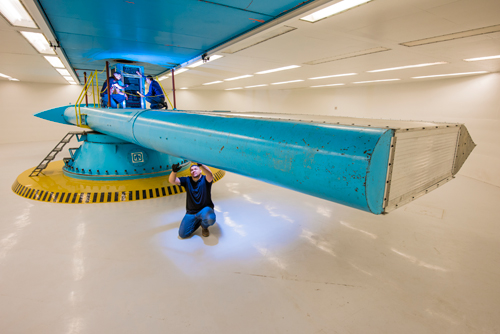 One of the nation’s largest nuclear weapons laboratories is seeking contractor bids to manage its day-to-day operations. The competition for the Sandia National Laboratories deal could cause a shakeup as the lab has been run by the same contractor — Lockheed Martin Corp. — for 23 years.

Sandia is one of three major nuclear weapons labs under the Department of Energy’s National Nuclear Security Administration. It has a nearly $3 billion annual operating budget and a workforce of 11,000 in Albuquerque, New Mexico.

One of the Pentagon’s top contractors, The Boeing Co., announced last month it plans to challenge Lockheed for the Sandia work, and has lined up a team of partner companies such as Battelle and major universities — Texas A&M, the University of Texas and the University of New Mexico — to bolster its bid. Boeing declined to provide details on the arrangement. “We are not commenting on the specifics of how we are organized at this time because this information is competition sensitive,” said Boeing spokesman Jerry Drelling.

The NNSA issued a final request for proposals May 18 and a contract decision is expected later this year or early 2017. Lockheed’s current contract expires April 30.

Sandia is what is known as a “government-owned, contractor-operated” facility where the focus is the maintenance of the nation’s nuclear stockpile. The contractor that operates the lab gets paid a fee, anywhere from $25 million to $27 million a year. By the standards of many Pentagon service contracts, it is not big money, but the stakes are high nonetheless because of the prestige associated with running a nuclear weapons lab. For the labs, having a team of universities in its management ranks offers the access to much needed fresh talent in science and engineering disciplines.

The universities decided to join forces with Boeing in part because they want to open up channels for their graduates to work in government. It is no secret that the U.S. government faces a shortage of advanced technical talent. A skills gap in the nation’s nuclear enterprise is becoming a growing concern, said Scott Sudduth, assistant vice chancellor and director of federal relations at the Texas A&M University System. “All the universities on this team, we are a large pipeline to the workforce at Sandia. A lot of our graduates work there. We’ve done a lot of collaboration.” Texas A&M officials have been positioning the school for a role in the Sandia bid since 2012.

The University of California System for years has partnered with Bechtel to manage the Los Alamos National Laboratory. Universities are a “powerful component regarding the pipeline of talent that the labs will need,” said David Daniel, deputy chancellor of the University of Texas System.

“Research and innovation are critical to the labs,” he said in an interview. Sandia and its sister nuclear labs Los Alamos and Lawrence Livermore are under pressure to step up their technical skills. Los Alamos and Livermore are responsible for the nuclear explosives package, whereas Sandia specializes in the integration of weapons with delivery systems.

“Increasingly the ability to test components, especially nuclear weapons, is more limited,” said Daniel. “Advanced simulations and computer modeling take on growing importance.” The national labs are “particularly challenged because of the need to hire people who are qualified and also are U.S. citizens that can get clearances,” he noted. The majority of graduates at colleges in engineering today are not U.S. citizens. It is also difficult to attract talent willing to move to New Mexico. “This is an increasing problem in the federal complex.”

Having a window into the government’s technical challenges benefits the universities that would be part of the Sandia management team, noted Dale Klein, associate vice chancellor for research at the University of Texas System. Klein is a former Pentagon official who dealt with nuclear, chemical and biological defense issues. “Universities have a large talent base but they don’t always know the problems of the labs or the problems the government is trying to solve,” he told National Defense. “This will give us an opportunity to cross fertilize.”

UT Chancellor William McRaven, a retired Navy admiral and former special operations commander, is trying to position the school as a hotbed of national security talent. “He wants our students and faculty to be more engaged on national issues,” said Klein. “The nuclear world is complicated. There are valuable technologies that come out of universities.”

Besides Lockheed and Boeing, other bidders are still weighing their options. The NNSA website posted the names of several companies that have filed requests for information and agreed to be listed.  Nuclear lab management contracts typically are awarded in five-year increments. When Sandia opened in 1949, it was run by AT&T under a public service no-fee contract. In 1993, defense contractor Martin Marietta took over, and the company later was acquired by Lockheed.

Lockheed Martin spokesman Matt Kramer said the company intends to submit a bid for the Sandia management and operations contract. “We’re proud of our 23-year partnership with the Department of Energy’s National Nuclear Security Administration.”