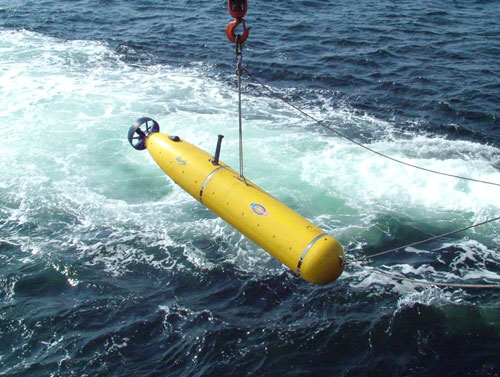 General Motors and the Navy announced a partnership June 23, which may lead to better fuel efficiency for unmanned undersea vehicles (UUVs).

GM will share its fuel cell research with the Navy, which is looking to boost the endurance of its submersibles up to six weeks without recharging.
“Developing this technology increases endurance for UUVs, which is important for the Navy’s long-range strategy,” Karen Swider-Lyons, head of the alternative energy section for the Navy’s research lab, said in a phone call with reporters.

Past work with fuel cells provided about a day or two of endurance undersea, she added, but new technology developed in conjunction with GM will allow the Navy to combine both battery and fuel cell technology.

“There has been a greater interest in developing undersea power over all,” said Charlie Freese, executive director of GM global fuel cell activities. “Fuel cells have a much greater capacity than batteries but they aren’t a nuclear system that can go on for months. We need to determine how long you can operate UUVs without intervention and how to possibly refuel the machines autonomously.”
Fuel cell technology is a potentially revolutionary energy source for zero-emission vehicles. It uses hydrogen and oxygen gas as fuel to create electricity, emitting water as waste. Batteries have generally beat out the new technology when it comes to building zero-emission cars because hydrogen refueling centers are uncommon, and require specific conditions to be contained, Freese said.
In the early days of UUV technology, the Navy used torpedo-sized vehicles, limiting the amount of energy they were able to carry. The larger vehicles allow more volume and weight, making fuel cells the more optimal choice, said  Rich Carlin, head of the Navy's sea warfare and weapons department.

As UUVs grow larger, the Navy is beginning to look at primarily using fuel cell technology over batteries. Fuel cells are more reliable and refuel at a faster rate than batteries, which can take hours to recharge. A press release from GM said its fuel cells are “compact and lightweight, and have high reliability and performance.”

“We are essentially trying to maximize efficiency by using fuel cells along with a motor,” Swider-Lyons said. “It’s tricky in undersea vehicles because it’s not just weight or volume, but buoyancy as well” that the Navy has to take into consideration.

“The hope is to end up with a vehicle that becomes fast charging with long-range capabilities,” Freese said, “That’s exactly what the Navy needs out of this [fuel cell] application.”

Navy’s Ice Exercise Kicks Off in the Arctic