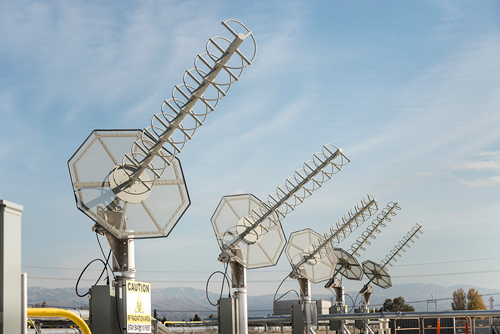 An on-orbit spare for the Navy’s new powerful Mobile User Objective System spacecraft is set to launch June 24, marking a milestone in the service’s long journey to field its next-generation communication satellites.

The four Lockheed Martin-built MUOS satellites, plus the spare slated to be launched from Cape Canaveral, Florida, have been described as “cell towers in the sky” for their capacity to deliver smartphone-like services to troops, vehicles and aircraft in the field.

The Navy is responsible for developing the aircraft, the ground system and the software-defined radio waveform that connects terminals to the spacecraft and the four ground stations. Development of the latter has lagged, however, and the new fleet is operating under their capacity.

The Navy had difficulties developing the wideband code division multiple access waveform, which manufacturers needed to integrate into their radios. Capt. Joe Kan, MUOS program manager, said now that the waveform difficulties have been ironed out, tests and evaluations of terminals are ongoing.

The first spacecraft in the constellation was delivered to orbit in 2012, and global coverage achieved in 2015 when the last of the four main satellites became operational. Launching them prior to MUOS-compatible terminals being ready became necessary because of the degradation of the legacy UHF Follow-On (UFO) satellite fleet. MUOS has a legacy UFO payload that has allowed the old terminals to continue communicating.

“One of the reasons MUOS was put into orbit when it did was to mitigate the legacy gap. We have successfully done that,” Kan told reporters on a conference call June 21. “With respect to the WCDMA payload, our focus is now on delivering that full suite of end-to-end capability as well as supporting the terminal field tests and certification. And we’re doing just that.”

The fifth satellite will not be a typical spare waiting for another spacecraft to stop functioning, Kan added. Its legacy UFO payload will be operational. Each MUOS has the capacity equaling one UFO satellite, he added. The MUOS has 10 times the capacity of the legacy payload and can operate farther north than any other system. It has been tested in latitudes only 30 miles short of the North Pole.

As terminal development continues to catch up with the satellites, questions remain as to when MUOS will reach its full potential. Kan listed several terminals that are scheduled to enter service in the coming years including digital modular radios for Navy, Coast Guard and Army transport ships in 2018.

The Army has 5,326 manpack radios, Col. Jim Ross, project manager for tactical radios, told National Defense earlier this year. Roughly half of them will be able to connect to MUOS, he added.
Another bump in the road is the ground station based in Niscemi, Italy. It is currently shut down because of a court order from a nearby Sicilian municipality. Local opposition against the facility has risen up due to environmental and radiowave concerns on the part of local citizens.

Work on the ground station is complete and it is operational, Kan said. “It does put the system at risk of being able to conduct worldwide operations to its full capacity and redundancy if that station is not restored to operations,” he said. The next court hearing is in late July, he added.