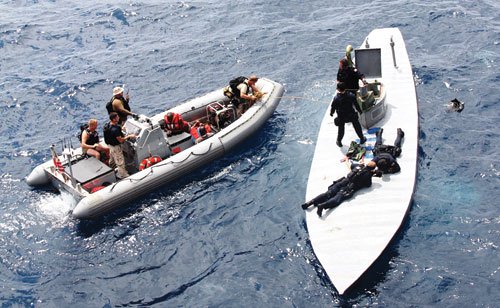 Sailors and Coast Guard personnel inspect a vessel containing illegal drugs.
U.S. Southern Command — with an area of responsibility that covers the Caribbean, Central and South America — is searching for new surveillance technologies to help U.S. allies and partner nations.

While the United States is not involved in any wars in Southcom’s area of operations, that doesn’t mean that it should be disregarded, said Adm. Kurt W. Tidd, commander of U.S. Southern Command.

“Because no nation in the region poses a direct, conventional military threat to the United States, Latin America tends to rank fairly low on force allocation priorities. This is understandable — but often requires what is, in my view, an unfortunate trade-off. Our attention to other parts of the world should not come at the expense of the significant gains made in our own hemisphere,” he said.

Tidd, speaking during a hearing before the Senate Armed Services Committee in March, noted that over the past two decades the United States has played an integral role in supporting democratic governances and economic development in the region.

“As criminal networks threaten the integrity of institutions and jeopardize citizen security, we must help countries build on the considerable progress achieved to date and continue working towards our shared priorities,” he said. “Positive and persistent U.S. engagement remains essential to advancing a Western Hemisphere that is prosperous, stable and secure.”

Currently, Southcom is under resourced, Tidd told legislators. When asked by Sen. Bill Nelson, D-Fla., if the command has adequate funds to efficiently go after drug and human trafficking networks, Tidd said: “The simple fact of the matter is we do not. I do not have the ships, I do not have the aircraft to be able to execute the detection and monitoring mission to the level that has been established for us to achieve.”

Southcom officials are unable to maintain a persistent view of activities going on within their area of responsibility, he said.

“The established requirement in order to interdict at the established target level of 40 percent is up to 21 surface platforms,” he said.

On any given day, the command has between five and six surface ships patrolling, he said.
These are largely made up of Coast Guard cutters but also include one to two Navy vessels, he said.

Currently, only 11 percent of the command’s intelligence, surveillance and reconnaissance requirements are being met, he said.

To equip Southcom with more ships would come at the expense of other higher-priority theaters, he said.

Additionally, the command is still suffering from the effects of sequestration because of delayed maintenance on ships and aircraft, Tidd noted.

“Those ships are not available now … to operate in our theater. Any future sequestration would be catastrophic,” he said.

To beef up patrols and collect ISR, officials are leveraging the assets of partner nations, he said.

“Their intercept capability and interdiction capability has made a significant improvement,” he said. “As it stands right now, about half of the interdictions that occur, occur with the help of partner nations.”

Southcom officials not only face challenges from transnational organized crime networks, but also from nations such as Russia and terror groups like the Islamic State, Tidd said.

“Whether Sunni or Shia extremists would wittingly collaborate with criminal groups to accomplish their goals is up for debate. Many people are quick to dismiss the possibility of these groups working together in this part of the world. They believe the absence of evidence of a relationship is evidence of its absence,” he said. “We at U.S. Southern Command can’t be that certain.”

Both criminal organizations and terror groups operate in the world of weapons trafficking, illicit finance and fraud, he said.  But “Southern Command lacks … the intelligence necessary to identify, monitor and fully illuminate and understand these networks and the resources necessary to significantly disrupt, degrade and ideally dismantle them.”

The command is also concerned about foreign fighters — people who leave their native country to join the Islamic State, Tidd said.

“Since 2013, we have seen a small number of individuals and their families leaving the region to join ISIL in Syria or Iraq. The appeal of violent extremist ideology to some Caribbean citizens and their subsequent travel to Iraq and Syria remains a concern; not just for us, but for our friends and partners across the region,” he said. “As in other parts of the world, the potential return of violent extremists is a threat. These individuals could be well positioned to spread ISIL’s poisonous ideology and potentially inspire or execute acts of terror against U.S. or partner nation interests.”

Partner nations in the region are often unable to efficiently monitor these foreign fighters and lack robust counterterrorism resources, he said.

Russia is also a cause for concern. The country has maintained a presence in Latin America and has collected information about the United States and its regional partners, he said.

“Since mid-December 2014, Moscow has deployed an oceanographic and a hydrographic research ship to Nicaragua; an intelligence collection ship to the U.S. East Coast and Caribbean; and an additional oceanographic research ship to the Caribbean,” Tidd said. “This is four naval deployments to Latin America in less than 12 months, all of which involved data or intelligence collection.”

Russia’s aim, he said, is to prove that the country is a “global power capable of challenging U.S. leadership.” This requires that Southern Command deepen its security cooperation with partners in the region, he said.

Southern Command is looking for new sensors that can provide it with enhanced capabilities, he said. “We have a slew of sensors that we’re working on to see which one of those can help us not only on the detection and monitoring [missions] but also to provide support … [for] disaster response [and] environmental security.”

The command currently uses synthetic aperture radars to see through cloud cover, which is critical in monitoring natural disasters like hurricanes where standard imaging sensors don’t work as well, he added.

The command is also looking for ways to improve communication in the region. Vast jungles and waterways characterize South America’s topography. That remoteness can make it difficult for radios and communication systems to connect, Hurtado said. Satellites could be one way to bridge the gap, he noted.

“Right now we are looking at nanosatellite technology in order … to see if they have military utility,” he said.
The command — which is working alongside NASA, the U.S. Army, Brazil and Colombia — has launched five nanosatellites to provide voice, text and data information for military operations, he said. Each satellite is about the size of a loaf of bread, he said. The systems will be a less expensive way to communicate, he added.

“It’s very expensive … to synchronize the various radios that are being used by the partner nations and us,” he said. With nanosatellites — which cost about $500,000 each — there will be better
interoperability, he noted.

Nanosatellites are less complex and expensive than traditional systems. “That has given access to many partners that didn’t have access to space,” he said.

In May, the command tested the constellation of satellites in Colombia. In June, it plans to test them in Brazil, he said. Southern Command expects to release a report on the study around September.

“We have conducted testing in all the various regions — the Caribbean, Central America, South America,” he said. “They are always very willing. … We have a partnership in which we bring the technology and the scientists and they provide in many cases the forces and the sites and the mission sets.”

“When it comes to equipment, the focus will be on ISR assets [such as] surveillance aircraft and particularly UAVs; interdiction platforms, namely small boats and helicopters; communications systems as well as intelligence and biometrics capabilities,” he said. “Any technologies that can aid in multi-national operations will be welcomed as well.”

There are numerous opportunities for U.S. defense contractors to sell equipment to Southcom but the command faces prioritization issues, he said.

“While Southcom partnerships are a key component of the broader U.S. defense strategy, the higher funding priorities are European Command, Central Command and Pacific Command,” he told National Defense in an email. “Those commands also require much more advanced systems, whereas Southcom requirements are more low-end in nature, and so do not offer the same big-ticket opportunities that exists elsewhere.”

Latin American countries traditionally do not spend heavily on defense, said William Ostrove, an aerospace and defense analyst at Forecast International. “Compared to other regions of the world, only African nations spend less on defense. In terms of purchasing equipment, Latin America invests even less, since the majority of defense spending in the region goes towards salaries.”

However, there are some exceptions. Brazil, which has the largest economy in the area, spends more than most South American countries. Brazilian defense investment was 39 percent of the regional total, he said.

“The Latin American defense market has been small but steady over the past few years,” Ostrove said. “For years, economies in Latin America grew rapidly, driven by demand for commodities like copper and oil in China. In addition to economic growth, continued fighting against drug cartels and guerilla groups have created strong opportunities to sell military equipment.”

But over the next year or two, that market is at risk because of economic problems in Brazil and Venezuela, he said. “As commodity prices drop and economies enter recession, governments will be faced with large deficits and may be forced to cut defense spending.”

Most countries in the region purchase their military equipment from foreign suppliers, but there has been increased interest in forming partnerships, he said.

One example includes a contract that Chile recently signed with German shipbuilder Fassmer to provide the nation with offshore patrol vessels. Chilean company ASMAR will do the construction work, Ostrove said.