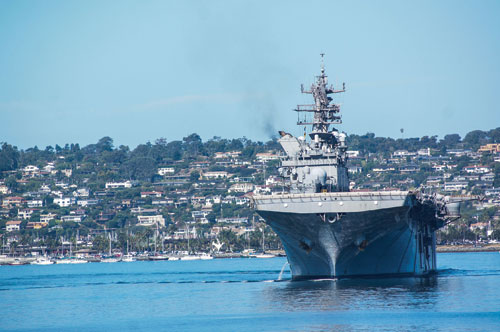 USS Makin Island
The Navy and Marine Corps are pursuing new energy-efficient capabilities that could help save lives and increase resiliency to adversaries’ attacks on their power grids, a Navy official said.

The Department of the Navy has two key goals for its energy portfolio: enhancing Navy and Marine Corps combat capabilities and advancing security afloat and ashore, said Dennis McGinn, assistant secretary of the Navy for energy, installations and environment, in written testimony to Congress.

“Using energy more efficiently allows us to go where we’re needed, when we’re needed, stay there longer and deliver more firepower when necessary,” he said in an April hearing before the subcommittee on readiness and management support under the Senate Armed Services Committee.

“Improving our efficiency and diversifying our energy sources also saves lives,” he noted. During the height of operations in Afghanistan, one Marine was killed or wounded for every 50 convoys transporting fuel into theater. “Reducing demand at the tip of the spear through energy efficiency, behavior change and new technologies takes fuel trucks off the road.”

To improve efficiency, the Marine Corps is working to integrate solar power into unmanned aerial vehicles, allowing them to provide persistent surveillance for longer periods of time before needing to be refueled, he said. The Marines are also working to harvest alternative forms of energy — including kinetic — for an integrated power system that can operate radios and electronic gear.

In 2016 the Navy will begin installing hybrid electric drives in its destroyers “enabling our ships to remain on station longer during low-speed missions and extend time between refueling,” McGinn said. The technology is the same being employed today aboard the amphibious assault ships USS Makin Island and USS America, he added.

Meanwhile, both services are working on projects to improve resiliency to power outages on bases caused by acts of terrorism, adverse weather or mechanical failure.

The Navy is installing eight gigawatts of distributed generation and a microgrid at Naval Submarine Base New London, Connecticut, that will power not only the base but also key parts of the nearby city of Groton in the event of a power outage, McGinn said at an Atlantic Council panel discussion in April. This will include the city’s first responders and medical facilities. “It isn’t simply a brightly lit, isolated island of electricity on the naval submarine base,” he said. “It is that plus the community that we partner with.”

At Naval Submarine Base Kings Bay, Georgia, the Georgia Power Company is constructing a 42-megawatt solar-generation facility that the base will have access to during external grid outages, McGinn said in his testimony. Similarly, the Marine Corps Logistics Base Albany, Georgia, will gain access to a 44-megawatt solar-generation facility on its base and a second feeder line from the Georgia Power Company’s grid at Kings Bay.

Additionally, the Arizona Power Service recently signed an agreement to develop a microgrid at Marine Corps Air Station Yuma, Arizona, and will provide the base with unlimited access to onsite backup power. That will eliminate the need for up to 41 diesel generators, McGinn said.