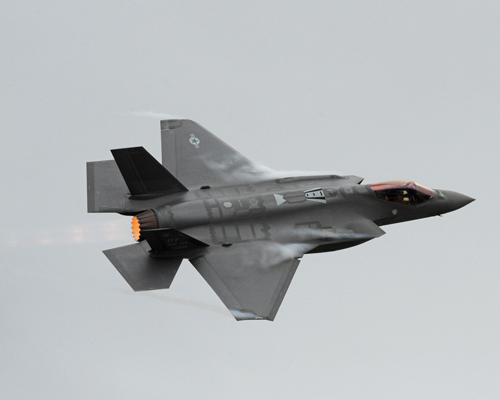 The F-35 joint strike fighter, in the words of the program’s top official, is at a “pivot point,” poised to wrap up development in late 2017 and begin a transition to mass production and follow-on upgrades.

With more than 150 aircraft delivered so far, the F-35 is looking to grab more international buyers and is preparing for its big international airshow debut in July at Farnborough, England. The per-aircraft cost of the estimated $400 billion program has come down, and prime contractor Lockheed Martin is standing up a cutting-edge lean manufacturing line to start assembling nearly 3,000 aircraft through 2040. The Pentagon is budgeting about $14 billion annually for the F-35 over the next two decades.

At the same time, the program is coming under fierce political attack from a number of fronts. Long-time critic Sen. John McCain, R-Ariz., is calling for a sweeping management overhaul. Lawmakers and government watchdogs have put forth proposals to ensure there is tighter oversight before the F-35 moves into its next “Block 4” upgrade phase. Other members of Congress, meanwhile, continue to pounce on the Pentagon’s decision to push out the A-10 close-air-support plane before it is clear that the F-35 is ready and able to perform that mission.

The latest bomb lobbed at the program came from Senate Armed Services Committee Chairman McCain in the committee’s version of the fiscal year 2017 National Defense Authorization Act. The language would eliminate the massive F-35 joint program office by 2019 and reassign its responsibilities to the Air Force and the Navy. The Air Force buys one of the variants, the F-35A, and the Navy is acquiring the F-35B for the Marine Corps and the F-35C to serve aboard aircraft carriers.

A defense official told National Defense that the F-35 program office was surprised by the SASC provisions. To be sure, it is early in the NDAA process and observers believe it is unlikely this provision will survive conference negotiations between the Senate and the House. Officials continue to be puzzled by congressional actions that reflect deep skepticism of the F-35 program while, at the same time, committees continue to add funding beyond what the Pentagon requested. Many lawmakers frequently point out the necessity to start fielding fifth-generation combat aircraft as soon as possible to stay ahead of tactical aviation advances by emerging competitors Russia and China.

The SASC bill provides a waiver that would allow the secretary of defense to avert the disbandment of the F-35 joint program office if he or she certifies that the office is indeed needed. The defense official said this provision greatly weakens the chances that the office will be shut down because the defense secretary would have ample justification to keep the JPO in place. The requirement by the United States to support 11 international customers would be a case in point.

McCain often has made a point of the large size of the JPO, headquartered in Arlington, Virginia. The office employs about 2,600 federal workers, military personnel and contractors, including testers at Naval Air Station Patuxent River, Maryland, and Edwards Air Force Base, California. McCain said the size and the cost to operate the JPO — about $70 million a year — is “pretty disturbing.”

The SASC fiscal year 2017 NDAA report said the F-35 program is “in need of change” and noted that promised “common requirements” among the three variants aren’t being met. The commonality issue has been a sticking point in the F-35 program since it was conceived in the mid-1990s. Merging three fighters into one program was viewed then as efficient — as it would force the three services to share equipment and work collaboratively. In reality, the JPO has managed three separate development programs. In terms of physical components, just 20 to 25 percent are common across all three variants. Only the software and some of the digital systems in the cockpit are truly common.

“The illusion of jointness perpetuated by the structure of the F-35 joint program stifles the proper alignment of responsibility and accountability this program so desperately needs,” McCain said.

In parallel to efforts to reorganize the F-35 office are initiatives to split future aircraft upgrades — dubbed Block 4 — into a stand-alone program subject to stepped up regulatory oversight. This was first proposed by the Government Accountability Office in April.

“Although the estimated F-35 program acquisition costs have decreased since 2014, the program continues to face significant affordability challenges,” said GAO’s defense acquisitions expert Michael Sullivan. Block 4 upgrades are projected to cost $3 billion over the next six years, “which would qualify it as a major defense acquisition program in its own right,” he told lawmakers in a prepared statement. The Pentagon plans to keep Block 4 as part of the existing baseline. As a result, it would not be subject to the oversight typically expected in new programs, such as providing Congress with regular status reports.

GAO cautioned Congress that it should have learned the lessons from the F-22 Raptor modernization program, where it was difficult to separate the performance and cost of the modernization from the baseline program. GAO suggested Block 4 should be managed as a separate acquisition program to ensure transparency.

During the House Armed Services Committee’s NDAA debate, Rep. Tammy Duckworth, D-Ill., offered an amendment that would have placed the F-35 Block 4 modernization program in a separate acquisition process known as “major acquisition defense project.” The amendment was defeated, but an impetus to seek greater accountability in the F-35 program has not disappeared.

The Defense Department’s top weapons buyer Frank Kendall told McCain he opposed separating Block 4 into an independent program. “That will bring a lot of additional bureaucracy and costs. I was hoping to avoid that.”

Robert Hale, former Defense Department comptroller, agreed. He called GAO’s proposal an unproductive initiative that creates more red tape. “You balkanize these programs and they require separate reporting,” he told National Defense. “Congress needs to continue to exert oversight. But separating out the modifications doesn’t sound like a good idea to me.”

McCain was emphatic during a SASC hearing last month that the committee does not trust the Pentagon when it comes to the F-35. “The program's record of performance has been both a scandal and a tragedy with respect to cost, schedule and performance, and it's a textbook example of why this committee has placed such a high priority on reforming the broken defense acquisition system.”

McCain not only wants Block 4 upgrades to be spun off but also will push the Pentagon to use fixed-price contracts.

Air Force Lt. Gen. Christopher Bogdan, program executive officer for the F-35, assured McCain that things are moving in the right direction. “The program is at a pivot point,” he said. “We'll see production grow from delivering 45 aircraft in 2015 to delivering over 100 airplanes in 2018 and up to 145 by 2020. Additionally, in the next four years, we will continue a stand-up of 17 new operating F-35 bases all over the world.” The cost of an F-35A with an engine and fee in then-year dollars will drop to less than $85 million in fiscal year 2019.

There are still development hiccups that Bogdan said would be fixed in the coming months. J. Michael Gilmore, director of operational test and evaluation for the Defense Department, estimated the F-35 will not be ready for operational tests and evaluation until mid-calendar year 2018 at the earliest. That's about one-year later than the original schedule.

Gilmore told the SASC that he continues to have concerns about the F-35 maintenance software, called the autonomic logistics information system. “ALIS remains immature requiring problematic and resource-intensive workarounds not acceptable in combat,” he said. Gilmore generally has been skeptical of the program from day one. “The F-35 is an extreme example of optimistic, if not ridiculous assumptions about how a program would play out.”

One of Gilmore’s most highly anticipated actions is a comparative test of the ability of the F-35 to perform close air support, combat search-and-rescue, and other missions against the A-10. This followed a relentless campaign by A-10 supporters on Capitol Hill that ultimately compelled the Air Force to delay the retirement of the venerable Warthog. “The Congress will not allow any more of these legacy aircraft to be retired from service until there is no doubt the F-35 can adequately replace them,” said McCain.

“To me, comparison testing makes common sense,” Gilmore said. “If you're spending a lot of money to get improved capability, the easiest way to demonstrate it is to do a rigorous comparison test.”

Former Defense Department comptroller Hale said the congressional reforms and attempts to micromanage the F-35 are nothing to panic about.

“Big developments programs always struggle,” Hale told National Defense. “I liken big-ticket weapon programs to kids. When they’re young they generally do what you say. When they’re teenagers they almost always drive you nuts. Most grow up to be productive adults. The F-35 is probably a late teenager now. It has gone through many of its growing pains but not all,” he said. “I think it will become a productive airplane for the United States and we’ll buy it for decades.”

Marine Corps Prepared to Hold On to Aging Weapons