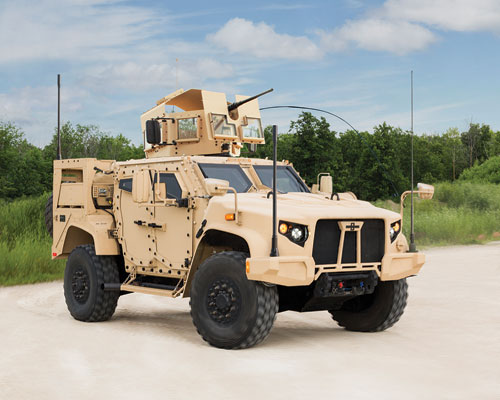 The Army has decided for the time being to use the new joint light tactical vehicle as the platform for its upcoming light reconnaissance vehicle program rather than procuring a new system, service officials said May 11.

With few new truck procurement programs in the future, contractor executives at the National Defense Industrial Association's Tactical Wheeled Vehicle conference in Reston, Virginia, were hoping to hear more details about the upcoming program. The LRV will be an off-road platform that will carry a suite of intelligence, surveillance and reconnaissance sensors and be light enough to be carried by a CH-47 Chinook helicopter.

Maj. Gen. Cedric Wins, director of force development at the office of the deputy chief of staff, G-8, said,“The light reconnaissance vehicle, at least initially, will be the JLTV.”

“There is always the possibility that the Army will begin to evaluate the performance of JLTV in that role and make a determination that a change is necessary,” he said. But the decision stands for the time being, he said.

The JLTV will have to be adapted to“allow scouts to perform the mission of finding and getting information— and at times—fighting to get information,” Win said.

Army officials late last year indicated that they were leaning in the direction of the JLTV rather than procuring a new platform.The primary reason stated was the cost in a time of austere budgets. The service hosted a light recon vehicle platform performance demonstration at Fort Benning, Georgia, in August. A number of trucks participated, including:Polaris’DAGOR, Rheinmetall’s Weasel,

The first of the Oshkosh Corp.-built JLTVs are expected to roll off the production line this August. The Army is looking at a variety of ways that the new vehicle might be used, and converting some of them to the LRV doesn’t mean that the service will order numbers beyond what has already been approved.However, it may mean that the Army will not divest of as many Humvees as it had originally planned, he noted.

The Humvee, the legacy light tactical wheeled vehicle, will remain in the Army’s inventory, but a final decision on how many the service will retain won’t be made until 2018, Win said.

A more immediate acquisition priority for the Army, Dyess said, is the mobile protective firepower platform, which is envisioned as a light tank for urban combat. An Army Requirements Oversight Council is scheduled for June 2017. Army Chief of Staff Gen. Mark A. Milley has taken a keen interest in the program and will be approving the requirements himself as the program moves forward, Dyess said.

Questions remaining on that program center around the requirement of whether it should be air dropped at low velocity, and whether the acquisition strategy should include prototyping, Dyess added.

"How are both of those going to inform each other?" The new platform will also have implications for the next iteration of the Bradley Fighting Vehicle. All of these questions are interconnected, he said.