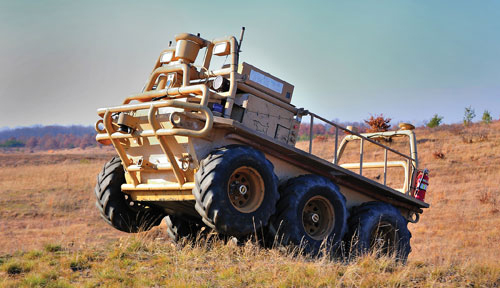 Lockheed Martin's squad mission support system
Last year, the Army tested robotic mules in the snow in Alaska. Later, soldiers drove them through the jungles of Hawaii. Then they also were put through the paces in desert conditions at Fort Bliss, Texas.

Four semi-autonomous vehicles capable of carrying heavy loads for foot soldiers were even sent in 2011 to Afghanistan where they were employed in combat.

“And we’ve been doing demonstrations ever since,” said Stu Hatfield, chief of the robotics branch, Department of the Army, G-8.

Robot proponents inside and outside the military are asking when the demonstrations will end and the fielding begin.

Known as the squad multipurpose equipment transport (SMET), it’s an idea that emerged from the ashes of the Army’s Future Combat System modernization program. After FCS was canceled in 2009, the Army continued to provide some funding for the concept, Hatfield said at the National Defense Industrial Association’s Ground Robotics Capabilities conference.

“It’s 2016 and we have been going at it a little while,” he said, acknowledging that there has been some frustration that the idea is not moving forward. “We are looking forward to that being a new-start program,” he added.

The Army has suffered from the problem of not knowing exactly what it wanted as far as a robot that can take the load off dismounted troops, he said.

“Requirements are still emerging,” said Bryan McVeigh, project manager for force protection at program executive office combat support and combat service support. It will be McVeigh’s job to field a SMET program of record, if he should ever be given the green light.

The Army’s current plans call for the SMET to come in two or three sizes. Army Training and Doctrine Command is working on the requirements, with an engineering, manufacturing and development phase beginning about 2019 and lasting three years. They would be either tele-operated or fully autonomous, Scott Davis, program executive officer for combat support and combat service support, said at an industry conference in 2015.

McVeigh said: “Our challenge for SMET is that it is a workhorse. Do we want it to be just the ability to carry soldiers’ equipment? There is a huge advantage to doing that.”

But it can be so much more. It could do casualty evacuation. It can be armed and serve as a remote weapons station. The Army engineering community is considering placing a significant portion of its payload on the mule, he added.

“How do we make this a workhorse for all, understanding that we don’t have enough money to pay for this and for it to go out to every unit out there?” McVeigh asked.

“There are some interesting acquisition approaches. How do we take a technology that is emerging and … figure out how we can move the bureaucracy along to make this work?” he said.

One idea is to field the robots in increments, with one brigade receiving a basic model and being allowed to use it. Then the program would take lessons learned from that unit’s experience and apply them to a second increment. But instead of the first brigade receiving the upgraded model, it is given to a second brigade to use. The office wouldn’t go back to improve the increment 1 model until a technology refresh is required.

This would be more affordable than the traditional “big bang” approach where hundreds of the mules are produced and fielded at once, he said.

After 15 years of acquiring robots in rapid acquisition programs, “the bureaucracy is reasserting itself,” McVeigh said. It takes two years to produce a requirements document, and two more years to put a robot on contract. “That’s four years when I need a tech refresh every five years,” he said. “We can’t keep doing things that way.”

Col. Kurt “Travis” Thompson, chief of the Army’s soldier requirements division, said “the bottom line is we have to get the capability out and into the hands and into the units so we can actually start moving forward.”

The soldiers will figure out what the mule’s limits are, what the capabilities are and what they need next, and then the Army can continue to spin out technologies from there and move forward, he said.

“But we’ve got to start somewhere,” he added.

The question is what does the Army want this new platform to do? “At the end of the day, there is a minimum that you want them to do and then we’ll figure out where that goes from there,” Thompson said.

“The SMET is really a workhorse. What its limitations are is really limited by our imagination,” he added.

Numerous demonstrations of models provided by various vendors have shown that some are too small to traverse rugged terrain and carry what is needed.

Others are too big. “Some can carry all the weight you need, but can’t get it to where you want to go.” It must fit in the back of a CH-47 or be sling loaded, Thompson said. There is a “happy medium” as far as size to do all these tasks, he said.

It will have to employ various payloads. “I don’t know what all those payloads are right now,” he added.

Standard soldier loads are a starting point. That is about 100 pounds of equipment for each member of a squad, who is expected to be self-sufficient for up to 72 hours. They can’t march with those kinds of loads and be expected to win the fight, he said.

Soldiers don’t walk for three consecutive days, though, and the SMET shouldn’t be expected to be in motion all the time, he noted. Yet the vehicle should also be able to provide off-board power when troops are at rest so they can recharge their devices. That means the robot may have to recharge itself when idle.

“Soldiers don’t walk for 72 hours, but when they’re not walking, they are probably going to want to be charging. So it needs to be able to work continuously,” Thompson said.

Transporting casualties is also high on the Army’s list of what it wants the SMET to accomplish. It takes almost a squad to remove an injured soldier and his gear from the front line. It is disruptive to operations, he noted.

They must be semi-autonomous. They can follow soldiers using waypoint navigation, or work on a tether. There is no need for expensive software, at least in the early increments, he said. As soldiers use them and figure out the tactics, techniques and procedures (TTPs), there will be a call for more autonomy, he said.

Dave Stone, robotic program officer at the Marine Corps Warfighting Lab’s science and technology division, said the mule needs more autonomy so Marines don’t have to operate a controller all the time.

Like the Army, the Marine Corps has put GUSS through numerous operational tests, but has yet to incorporate the technology into units. Many of the demonstrations centered on casualty evacuation, according to several Marine Corps and Navy produced stories published over the past four years.

“GUSS is an extremely capable autonomous vehicle that can perceive and classify objects in a completely unstructured environment and in GPS-denied conditions. A technology like this could be instrumental in how the Marines of the future fight,” said Naval Surface Warfare Center Dahlgren Division GUSS project lead Elizabeth Carlson in a Navy press release more than four years ago.

Stone said the lab is looking at a lighter tactical robotic controller system, in which a small computer is carried in a backpack and does the bulk of the processing. The Marine carries a small tablet that displays only the information on it that he needs.

“There are different levels of autonomy out there we can put in the field now. What we need to be working on then is the next step, the specific behaviors so we can establish a mission and have mission-level autonomy,” Stone said.

Bob Sadowski, the Army’s chief roboticist, said he is often asked why concepts such as robotic mules don’t make it into the field faster.

Senior leaders are the catalyst, he said.

Industry can help by accepting some of the risk up front by doing early demos and experiments and “showing that your technology is actually ready,” he said.

Even with a high technology readiness level, and with all the requirements documents in place, SMET will still need a champion to create a tipping point.

“When you have a senior leader walk in and say, ‘I’m igniting the gasoline,’ then you have that final ingredient,” he said.

3D-Printing May Enable Troops to Make Drones on Demand