Amazon's Bezos Determined to Lower the Cost of Space Launch 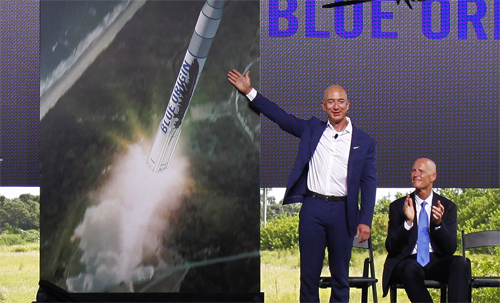 COLORADO SPRINGS, Colo. — Jeff Bezos, CEO and founder of Amazon.com and the Blue Origin space launch company, said it is vital that the cost of launching spacecraft be significantly lowered.

While the billionaire entrepreneur is working mostly in the space tourism industry, his goal is to make lofting objects into space routine enough to where "millions" of workers are plying their trades in space.

A life-long space enthusiast, he founded Blue Origin 15 years ago. He joked during a talk at the Space Symposium that he would neither "confirm nor deny" that the millions he makes from Amazon is just a means to fund his space activities. It was his first trip to the symposium, one of the world's largest military and civilian space conferences, and one of the first opportunities the industry has had to hear his thinking on space.

On April 2, his New Shepard rocket was successfully lofted to a suborbital position from a West Texas launch pad, and deployed a capsule that parachuted to the ground. The booster then dropped back to Earth with its thrusters allowing it to softly land. Refurbishing the rocket only costs "a few thousand dollars," he said.

Using exquisitely engineered hardware and throwing it away "is a kind of a crime," he said, and reusability will be the key to lowering costs. Space tourism is just a stepping stone to less expensive rockets, he said. He will put humans in the capsule who will be able to experience a few minutes of weightlessness on a test flight in 2017, and will sign up paying customers by 2018. He said he would be a passenger on one of those flights.

"I want to go to space. But what is more important to me is lowering the cost of space," he said. Doing so will unleash thousands of space entrepreneurs, he said.

One of the problems with space is that it lacks an infrastructure for entrepreneurship to thrive, he said. He compared to it his own experiences launching Amazon. When the Internet came along, it could ride on the robust, fully developed telephone system. For packages, the U.S. Postal Service and UPS had already created a ready to use delivery system.

Space does not have an infrastructure in place, and high launch costs are why, he said. There are about 50 launches per year, but there should be that many per week. Only the most important space applications are used because of the price barrier.

"The big heavy lifting pieces are not yet in place ... Blue Origin is trying to put that heavy lift infrastructure in place for next-generation reusability," he said. He likened it to a surgeon. It is safer to pick someone who performs surgery 25 times per week than only a few times per year. The tourism business will allow the company to dramatically increase the number of launches.

As for other billionaire-funded space companies such as Elon Musk's SpaceX and Richard Branson's Virgin Galactic, "the more the merrier," he said. Business is not like a sport where there is one winner and one loser. There is room for all these companies, he said, adding that he didn't have any intention to enter the satellite manufacturing business.

The New Shepard rocket being tested now will be the smallest rocket Blue Origin develops. The system is scalable. Bezos said "rockets want to be big." In fact, the larger they are, the more dependable they are, he said. The problem with big rockets is that they need larger manufacturing facilities and they are expensive to transport to launch facilities.

Bezos dove down into the weeds of rocket science and talked engineering, explaining the pros and cons of certain thrusters. "I've been obsessed with rockets and space flight since I was five years old," he said. Watching Neil Armstrong walk on the moon was a pivotal moment, he added.

His vision is a world where heavy manufacturing that requires lots of energy is moved off planet Earth and is carried out in space. "I want millions of people living and working in space," he said.

He spoke little about national security space other than to say that Blue Origin was proud to be working on developing its new BE-4 engine for the United Launch Alliance's Vulcan program, a new family of rockets that will launch military and other government payloads.