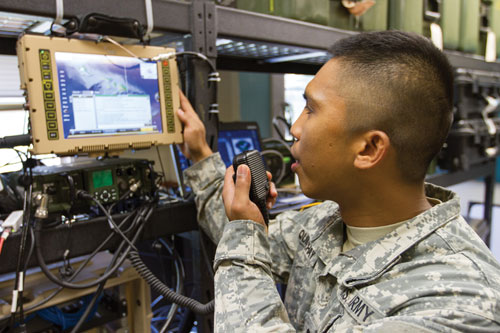 MUOS will provide troops with narrowband tactical communications that will give them access to secure, high-quality voice, video and data transfer via handheld radios. However, the program has been plagued with delays and developmental hiccups.

A spokesperson for Space and Naval Warfare Systems Command said a firm date for IOC has yet to be announced, but noted that it would be in 2016. Ross said he expected it would take place in late spring or early summer.

MUOS is a constellation of Navy satellites. The fifth and final spacecraft is slated to be launched in May. It will provide enhanced communications to tactical radios such as the Army’s two-channel Manpack via ground terminals and an advanced new waveform known as the wideband code division multiple access. It is expected that WCDMA will provide users with 10 times more capacity than the legacy ultra-high frequency system.

The developmental waveform recently caused the program’s schedule to slip after it was discovered that it had trouble integrating with the radios and the four Earth-based ground stations.

Last April, Cristina T. Chaplain, director of acquisition and sourcing management at the Government Accountability Office, testified before the Senate Armed Services Committee’s strategic forces subcommittee that 90 percent of the spacecrafts’ capacity was going unused as problems with the waveform were being worked out.

“As a result, the Army’s plans to field its MUOS-compatible radios have now slipped from 2014 to 2016, roughly four years since the first MUOS satellite launched,” she said.

The WCDMA issue caused MUOS’ operational test and evaluation to be pushed back from 2014 to the end of 2015, Sheehy said during a February panel discussion at an industry conference hosted by the U.S. Naval Institute and AFCEA International.

“We did spend about a year doing additional integration tests to make sure that the waveform terminal and the … ground system and the satellites were all operating in concert,” he said. “It took probably about 100,000 hours of over-the-air time to really bang it out.”

Those issues are now in the past, he said. WCDMA performed “as expected” during recent tests, he added.

Ross agreed that the issues that once plagued the system have now been resolved.

“The MUOS waveform is inherently a complex waveform to provide increased capacity and global coverage and the cell phone-like voice quality. It’s a pretty complex endeavor and we put thousands and thousands of test hours onto the waveform and onto the radio itself,” he said. “As a result of that extensive testing, under enormously complex test scenarios, we’ve wrung this thing out and I would say very empathically and with confidence that the waveform is ready for primetime. It’s solid.”

The service has begun the initial operational capability transition, said Sheehy. “It’s a very exciting time. We’re in the home stretch and folks are really excited to push this out.”

Now that MUOS is nearly ready for formal operations, General Dynamics is expecting there to be a “ground swell” of interest from customers and users who want the system to fill their own operational needs and gaps.

“We’re going to expect a considerable uptick in the number of demonstrations and interest now that the whole end-to-end system is ready,” he said. “MUOS is going to get a lot of attention from a lot of people given the unique capabilities it provides over the next six to 24 months.”

Already General Dynamics has used its experience developing the WCDMA waveform and incorporated it into other products to create a more robust architecture and radio capability, Ross said.

Joe Welch, chief of the technical management division at project manager tactical radios at the Army’s program executive office for command, control and communications-tactical, said the system will provide the service with a significant increase in capability.

It will be an “order of magnitude increase in the number of simultaneous access we can get with users,” he said. “What that means for an Army unit [is] where previously maybe the division, maybe brigade might have access to legacy [waveforms] … we anticipate that with MUOS that we’ll be able to push that forward” to lower levels.

As the military prepares for IOC, it is continuing to test MUOS, including in the U.S. Pacific Command region.

The service recently completed a demonstration in the Asia-Pacific. During a February exercise, the Army equipped logistic support vessels — which are used to transport equipment such as tanks and trucks — with Manpack radios, said Col. Jim Ross, project manager for tactical radios at Army PEO C3T.

Traditionally, when those ships are in operation in that region leaders will have to use expensive satellite phones to communicate, or systems that only cover a portion of the ocean.

“There are cases where those ships, in effect, would be out of communication with anyone that needs to track them or speak to them other than possibly through a satellite phone that they are paying exorbitant amounts for,” he said.

The ships traversed between Oahu and Hawaii’s main island. Soldiers were able to successfully communicate with land units 200 miles away, he said. Additionally, leaders were able to track the vessel’s location.

“That’s the power, really, of what we’re bringing in terms of the radios and the waveforms — to be able to provide our soldiers the means to communicate over vast distances using their organic equipment that we field to them,” he said. That “is a big deal for the Pacific theater.”

The Asia-Pacific provides challenges to military communication systems because of its sheer size as well as potential adversaries in the area, Bill Ross said.

“You really need in that region to be able to support what we call waveform diversity,” he said. “You never can tell when an adversary may take action to deny you specific access to a waveform or a part of the spectrum.”

Because the PRC-155 is a two-channel device, it can bridge from one waveform to another providing “connectivity pretty much anywhere globally through the MUOS constellation,” he said. The system is essentially a global gateway, he added.

Currently, the Army has 5,326 Manpack radios, Jim Ross said. The systems can connect with waveforms such as the soldier radio waveform, single channel ground and airborne radio system and ultra-high frequency satellite communications. Roughly half of them can connect to MUOS.

The radios connect to MUOS via what is known as a high-powered amplifier. “That is a small little box. If you were looking at the radio you probably wouldn’t even notice it unless … I pointed it out to you,” he said. “That’s the only piece that goes on the radio to enable it to work.”

The Army’s inventory of more than 5,000 radios was procured through a low-rate initial production contract with General Dynamics via its Handheld, Manpack and Small Form Fit program. In February, the service announced that it had chosen three vendors to compete for full-rate production of the radios.

General Dynamics, Harris Corp. and Rockwell Collins each have 60 days to provide 30 radios at no cost to the government for qualification testing, Jim Ross said. Following that, soldiers will operate the radios during a customer test phase.

Testing will occur over the next several months. “We’ll be looking at some limited things in terms of evaluating the capability of the radios and the performance of the radios,” he said.

Additionally, the service requires that vendors bring down the weight of the radio in order to increase the battery life and range of the device. The Army wants the system to weigh 14 pounds or less by fiscal year 2025; current LRIP radios weigh 19.3 pounds.

Overall, the service intends to purchase more than 60,000 radios. The entire cost of the program, including hardware, field support, warranties and training is $12.7 billion.

The service wants to ensure that healthy competition is at the forefront of the program, Jim Ross said.

“Our acquisition strategy is derived from trying to keep the most competition throughout the process as we can because we believe that the competition yields many good benefits. Mainly it yields a good price, but really it yields the best in innovation across the board so that we’re not [relying] on any one vendor in terms of being able to hopefully get the best solution possible,” he said.

It is possible that the Army could decide to go with two vendors, he added. The timeline for a decision is still in flux, but the radios will have to go through an operational test and evaluation, he added.

In the meantime, following the initial qualification and customer tests, there is a chance that the service could procure a small number of systems depending on its needs at the time, he said.