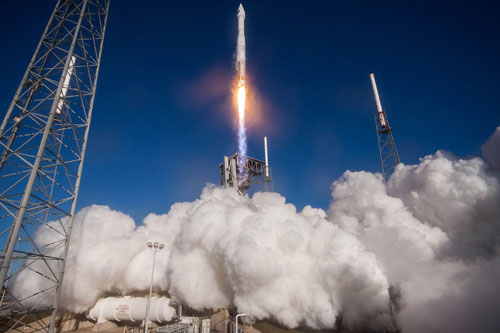 ULA Atlas V rocket
A U.S.-designed replacement for the Russian-made RD-180 rocket engine can be delivered for certification tests by the end of the decade, the president of Boeing’s network and space systems division said March 8.

“We should have engines available around the 2019 timeframe for certification,” Craig Cooning said at a briefing on the sidelines of the Satellite 2016 conference in National Harbor, Maryland.

Boeing and Lockheed Martin are the two partners comprising United Launch Alliance, and Cooning sits on its board of directors. The company has relied on Russian-made engines for its Atlas V rockets to launch national security space satellites. Russia’s invasion of Ukraine sparked Congress in 2014 to halt future acquisitions of the engine, although ULA has since been given a reprieve until a domestic engine has been developed.
Cooning said there should be two concurrent programs going forward, the BE-4 being developed by Blue Origin, a start-up founded by Amazon.com billionaire founder Jeff Bezos and the AR-1 from Aerojet Rocketdyne.

“Anything that United Launch Alliance does is ultimately to assure mission success and we think the best way to assure that is to hedge our bets and go forward for as long as possible with two engine providers,” he said.

ULA is developing its own new Vulcan family of rockets. “What ULA is doing is investing in a new rocket engine, and we’re doing it incrementally as we understand what the ultimate acquisition policy is here.”

The government is providing seed money for engine development to several companies, he noted. But the engine is only one component, he added.

“We think that is a step in the right direction, but an engine alone does not make a rocket,” he said. The corresponding investment to integrate the engine with the rest of the system needs to happen, he added. There is money in the 2017 budget proposal for rocket development. That is encouraging, but there should be an alignment between the Defense Department and Congress as development moves forward, he said.

Before Congress reversed its decision to completely stop RD-180 procurement, it appeared that rival SpaceX and its Falcon family of rockets would have a competitive advantage over ULA. Now that the alliance can continue to procure RD-180 engines for as long as needed, it is pushing ahead with investments using private and public funding, Cooning said.

“One of the things we have told the government is that United Launch Alliance in order to invest needs to be a viable business, and if it is not viable then we don’t necessarily have the funds to go and make that investment. We were waiting to see what the government’s position was in regards to future acquisitions,” Cooning said.

“The government has now come out strongly and said they need two families of vehicles to launch. … We’re assuming one is going to be SpaceX and another one will probably be United Launch Alliance,” he added.

There are several upcoming missions that have to be launched, All of them can be done by United Launch Alliance, and SpaceX can do about 60 percent of them, he said. National security space launches could drop as low as six per year. NASA and commercial launches will have to take up the slack, he said.
ULA received good news this week when the Treasury Department announced that the RD-180 engines, manufactured by NPO Energomash, were not subject to trade sanctions, Bloomberg News reported March 7. Sen. John McCain, R-Ariz., chairman of the Senate Armed Services Committee, had fought to limit ULA’s purchase to nine more engines, while the Air Force has said it will need twice as many before the new engine is certified.
Meanwhile, the Space Foundation, sponsor of the annual Space Symposium in Colorado Springs, Colorado, announced March 8 that Bezos will speak about Blue Origins at the conference on April 12. The once press-averse company and its executives have only recently begun making public appearances.