Army Officials Paint Dire Picture of the State of the Force 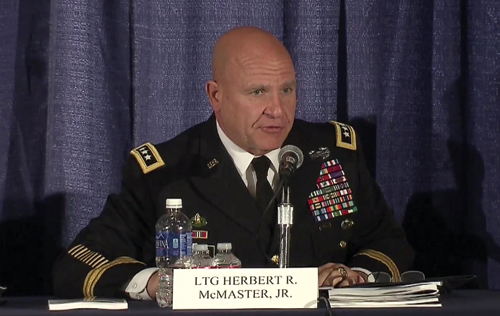 HUNTSVILLE, Alabama – The Army is too small and could be outgunned in future conflicts, service officials said March 15.

The warnings came at a time when the ground force is shrinking and potential adversaries are improving their military technologies.

“Future Army forces may be not only outnumbered … but we also may face enemies who have overmatch capability over us in some key areas,” Lt. Gen. H. R. McMaster, deputy commanding general of U.S. Army Training and Doctrine Command, said at an Association of the United States Army conference in Huntsville, Alabama.

“We see obviously in Europe in particular that we may have Army forces that are also to some degree out of position to deter conflict or then to respond to and resolve conflict,” he added.

Meanwhile, the Army’s ability to modernize as well as field and sustain critical capabilities “is being sorely tested on all fronts,” said Katrina McFarland, acting assistant secretary of the Army for acquisition, technology and logistics.

The United States has not kept pace with potential adversaries' advanced combat vehicles, McMaster said, noting that other countries are developing better protective systems for their vehicles. The service also falls short on armor, he added.

“Our Army has become too light,” he said. “Some people made some strange assumptions about the nature of future war that really have not panned out right that you just really need to be lean and nimble” to prevail.

Officials are examining options for growing capacity when it comes to armored brigade combat teams, he noted.

“We don’t want a fair fight,” McMaster said. “If we show up with ‘U.S. Army’ on our chests in large numbers, [we want to ensure] you’re going to get your ass kicked,” he said.

The Army also needs to speed up the acquisition process, McFarland said. The service is setting up a rapid capabilities office to that end.

“One of the things that we have to think about similar to what we’re doing in some of the small radios is disposability — use and lose” certain items, she said.

But high-tech gear won’t compensate for having too small a force, officials said. The Army would have a limited surge and force regeneration capacity in the event of conflict, they noted.

“We know we have capacity challenges right now,” said Maj. Gen. William Hix, director of strategy, plans and policy in the office of the deputy chief of staff. “Technology is unlikely to solve this problem in the short or medium term.”

Another Stab at Reinventing the Pentagon

Don’t Let the Pentagon Get Stuck in Silicon Valley