Milley: Russia is the United States’ No. 1 Strategic Threat 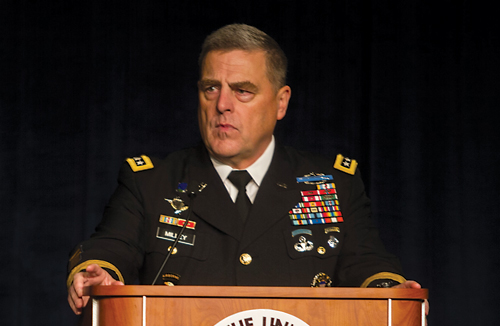 Russia, with its growing military arsenal and increased influence around the globe, poses the greatest strategic threat to the United States, the chief of staff of the Army said March 10.

Since the mid-2000s, Russia has been significantly improving its military. Concurrently, it has displayed aggressive behavior such as the illegal annexation of Crimea in 2014, he said during remarks at the New America Foundation’s Future of War conference in Washington, D.C.

“Russian behavior today by the definition of … international politics is aggressive,” he said. “They are invading sovereign countries with military forces. … Europe hasn’t seen that behavior since World War II — 70 years. So that’s a major strategic shift of behavior.”

While it would take a mind reader to know exactly what Russia's intents are, signals are pointing to it being hostile, he said. "It’s very difficult to figure out the intent of a foreign leader or a foreign power so you look at behavior as an indicator of intent and recent behavior since 2008 is aggressive by the Russians.”

Fear and pride are fueling the nation's expansion, he said. Russia wants to regain the world power status it once had during the era of czars and the Soviet Union.

Milley also noted that while North Korea is not an existential threat for the United States, a war in the Korean Peninsula would be devastating in human terms for those living in the region.

“War in the Korean Peninsula from a human perspective could be catastrophic. Seoul is a city of a 25 million people, they are 25 miles from the" demilitarized zone, he said. The city, with a population four times larger than New York City, would face hundreds of thousands of rounds of artillery and rocket fire, he said.

“The world has not seen that sort of human tragedy … or sort of violence probably since the really huge battles of World War II,” he said. “A war in the Korean Peninsula would be terrible.”  Such a conflict would also have major negative ramifications for the region’s economy, he said.

The Islamic State — which is known by ISIS or ISIL — will remain a significant issue for the United States going forward, Milley said.

“The challenge for us, the challenge for the Army and the military writ large, is we’ve got to sustain and maintain counterinsurgent and counterterrorist capabilities. We can’t lose that which we have gained or learned over the last 15 years,” he said. “My estimate is that we will be engaged in fighting terrorists or insurgents … for quite some time.”

Even if ISIL is destroyed, radical terrorism doesn’t “magically go away,” he said.

Without stating that he supported putting U.S. troops on the ground in support of counter-ISIL operations, Milley said, “If you’re at war with ISIS ... then there are certain requirements based on the logic of war that more or less have to be done.”

Milley predicted there would be fundamental changes to ground warfare in 10 to 15 years. For instance, he said there would be a greater reliance on robotics and autonomous convoys.  “Any modern Army has a relatively robust logistical tail for fuel, ammunition, food, water,” he said. These convoys can be especially vulnerable to attack. A robotic convoy wouldn’t expose troops to potential casualties.

Milley noted that there are many areas of promising emerging technology including in lasers, rail guns and ammunition.

Despite technology advancing rapidly, Army procurement is too slow and can be bogged down by delays in the acquisition process, he said.

“We’re trying to figure out ways to speed up the acquisition system,” he said. “Some of these systems take multiple years, some of them decades, to develop.”  For large, bureaucratic organizations, the best method of management is to “empower and decentralize,” while holding personnel accountable, he said.

“[We need] to empower the service chiefs, not just me, … with the capabilities to go out and do certain things, to speed the process up,” he said.

‘Rebalance-to-Asia' Strategy Is Safe, For Now