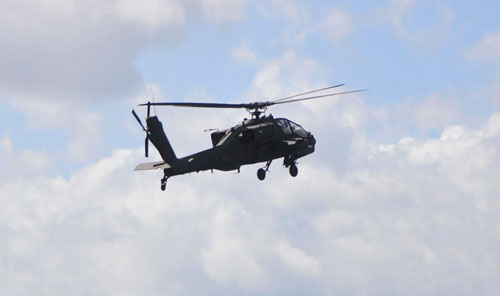 As the Army focuses on potential conflicts in Europe, many of its modernization programs are being cut.

President Obama’s fiscal year 2017 budget request released Feb. 9 requested a total of $148 billion — $125 billion in the base budget and $23 billion in oversea contingency funding for the Army. The 2017 base budget request is $1.4 billion less than what was enacted in fiscal year 2016. The request is “protecting current readiness at the expense of future modernization and end strength,” budget documents said.

In the base budget, the Army requested $55.3 billion for military personnel; $45.2 billion for operation and maintenance; $15.1 billion for procurement; and $7.5 billion for research, development, testing and evaluation.

OCO funds include $2.2 billion for military personnel; $13.8 billion for operation and maintenance accounts; $2.4 billion for procurement; and $100 million for RDT&E. The OCO boost comes a time of great uncertainty in Europe as Russia continues to exert its influence globally.

A total of $2.8 billion of the Army’s OCO funding will go toward the European Reassurance Initiative —  supplemental funding designed to thwart Russian aggression — a significant boost over 2016 enacted levels of $509 million. The Army is asking for $727 million for increased presence, $50 million to build partner capacity and $89 million for additional bilateral and multilateral exercises and training.

According to budget documents, this funding will increase “warfighting capacity on the continent through increase prepositioned equipment stocks [and] continues to provide rotational aviation capacity to the European command area of responsibility.”

During a Pentagon press conference, Maj. Gen. Thomas Horlander, director of Army budget, told reporters that the boost would help fund increased troop presence.
"We're going to do ... some heel-to-toe rotations, so where there is no gap or seams between when one unit rotates in and departs and another one follows behind it," he said.
Additionally, compared to last year there are many more exercises between the United States and its allies in Europe. "I know they [the allies] are really excited and appreciative of this," he said.
Horlander said some tough choices had to be made because of budget constraints.

"The only growth from FY 16 to '17 is in our operation and maintenance accounts," he said. "This is the funding primarily used to generate current readiness. Resourcing constraints did not allow us to modernize our equipment and facilities at the same pace as we sought to minimize the risk to current readiness."

As the Army built its 2017 budget, it kept readiness at the forefront, he added. Calling it the service's number one priority, Horlander said the Army has a goal to keep two-thirds of its regular Army forces ready at any one time.

A total of $3.9 billion was allocated toward aircraft programs, which had a cut of $2 billion from 2016. The Army plans to reduce purchases of key helicopters. It requested 48 AH-64E remanufactured Apaches, 36 UH-60M Black Hawks and 22 CH-47 Chinooks, down significantly from the enacted 2016 numbers of 64 Apaches, 107 Black Hawks and 39 Chinooks.
While aviation programs bore much of the burden, Horlander said the Army tried to keep the accounts as stable as possible.

"[We] obviously had to balance that against the entire portfolio," he said. However, "we had a great advantage with some of these multi-year contracts for the Apache and the Black Hawk."
Horlander remained adamant that despite the cuts, the Army made the best of a bad situation when selecting where to cut modernization accounts.

Spending for weapons and tracked combat vehicles declined slightly in the 2017 budget request. The 2017 request would decrease funding by $19 million for a total of $2.4 billion, including the base budget and OCO funds. This will go toward upgrades to the Stryker vehicle as well as modifications to the Abrams tank.

Tactical and support vehicle spending went down in the base budget by $119 million in the 2017 budget for a total of $3.3 billion. A significant portion of the budget will be devoted to funding the joint light tactical vehicle. A total of $587 million will go toward low-rate initial production of 1,828 vehicles and “supports the continuation of the JLTV test program to include production qualification test and reliability qualification test in support of initial operational capability scheduled for FY 2018.”

Spending on electronics and communication devices was also bolstered in the budget. Overall spending, including base budget and OCO, went from $3.4 billion in 2016 to a requested $3.9 billion for 2017, an increase of $471 million.

Spending for RDT&E received a small boost, going from $7.56 billion in fiscal year 2016 to $7.62 in the fiscal year 2017 request. Key investments include “combat vehicle and automotive technology, joint multi-role helicopter and high-energy lasers,” according to budget documents.

All three components of the Army — the regular, the National Guard and the Reserve — continue to draw down in end strength. The service requested 990,000 troops for fiscal year 2017, which is a cut of 25,000 from what was authorized in fiscal year 2016. It plans to cut an additional 10,000 soldiers in fiscal year 2018.
Horlander noted that while the Army faces a tight budget, it is also dealing with a slew of conflicts around the world. From Russian aggression to the Islamic State, the service is being pulled in a number of directions, he said.

"In just the past several years, we have seen a number of emergent operations that require American soldiers to deploy and operate for extended periods of times for contingency operations. Some of these were not even anticipated a year earlier," he said. "The world's security environment is changing so fast that the Army needs predictable and consistent funding across its entire funding portfolio year after year to keep pace with these changes, to protect [against] both current and future threats to America's national security interest."
Cutting back on modernization and science and technology puts the Army's technological dominance at risk, he said.

"I can't overemphasize that in order to have a formidable ground force capable of generating the requisite combat power to support our combatant commanders, both today and tomorrow the Army must achieve a greater balance between readiness, end strength and modernization," he said.

This post has been updated to include comments from an Army press briefing.