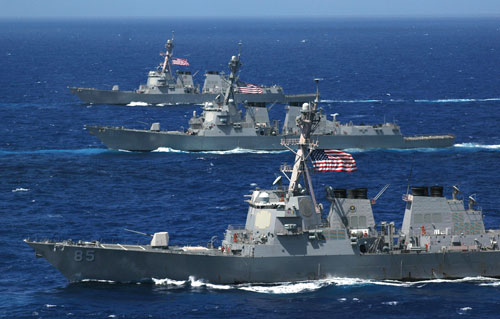 The Navy plans to buy seven battle ships in fiscal year 2017, as the service continues to grow its fleet in the face of increasing threats.

The move would increase the deployable battle force from 280 ships at the end of 2016 to 287 ships in 2017. Over the course of the future years defense plan, or FYDP, which covers fiscal years 2017 to 2021, the battle force would increase to 308 ships, according to the Navy’s fiscal year 2017 budget request, released on Feb. 9. During that period, the service plans to spend $97.3 billion on shipbuilding, procuring 38 battle force ships as well as 55 amphibious vessels and other platforms.

The Navy is asking for a total budget of $139.9 billion for 2017 including $7.9 billion for overseas contingency operations and $18.4 billion for shipbuilding procurement. The $132 billion base budget amount is $4.9 billion less than was appropriated for the service in fiscal year 2016. Much of that decrease is due to a decline in spending on aircraft procurement.

In fiscal year 2017, $3.2 billion would go toward weapons procurement, including Tomahawks, Standard Missile-6s and MK 48 torpedoes.

The fiscal year 2017 request includes: $42.1 billion for procurement; $40.4 billion for operations and maintenance; $17.3 billion for research, development, test and evaluation; and $29.9 billion for active duty and Reserve personnel.

The budget request makes a veiled reference to the threat posed by China to help justify spending.

“Today’s global security environment is characterized by the rising importance of the Indo-Asia-Pacific region, the ongoing development and fielding of anti-access/area denial capabilities that challenge our global maritime access … [and] the increasing frequency of maritime territorial disputes,” the document said.

The need for modernization was given special emphasis, as other powers enhance their military capabilities.

“The department has been challenged to build the capability for full-spectrum warfighting to deter high-end adversaries,” the Pentagon said. “This budget takes calculated risk in balancing today’s requirements and those required to counter 21st century threats, with gaps in training and maintenance that creates readiness risks in the event of a major contingency. The department prioritizes investments in modernization efforts to recapitalizes our forces.”