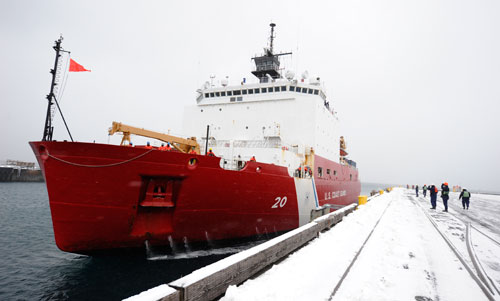 The Healy (Coast Guard)
After years of hand wringing, the Coast Guard recently began an effort to procure a new polar icebreaker.

In January, the sea service released a notice to industry on FedBizOpps that included an acquisition timeline and requirements to procure the vessel.

The Coast Guard will host an industry day in March followed by one-on-one meetings with companies. The vessel will be required to do scientific research, rescue operations and law enforcement missions, said Adm. Paul Zukunft, commandant of the service.

Pressure has been building for years to construct a new icebreaker. The Coast Guard — which has a statutory responsibility to maintain the nation’s fleet of polar icebreakers — only has two such vessels in operation.

The Polar Star, a heavy-duty vessel built in the 1970s, recently came out of a major refurbishment that is estimated to extend the service life of the platform by seven to 10 years. The Healy, a medium-duty ship, is used primarily for scientific research.

A third vessel, the Polar Sea, is currently in dry dock following an engine failure in 2010. The Coast Guard is studying whether it could refurbish the ship as well, though experts have said in the past that the vessel is in poor shape.

Compared to other nations’ fleets of icebreakers, the United States is significantly behind, Zukunft said.

During remarks in Seward, Alaska, in September, President Barack Obama called for the nation to invest in more of the vessels.

“After World War II, we had seven icebreakers — four under the Navy, three under the Coast Guard. Today, in part because we haven’t been reinvesting, although we technically have three, operationally we really only have two and only one heavy icebreaker,” he said. “Just to give you a sense of contrast, Russia has about 40, and 11 icebreakers either planned or under construction.”

The administration proposed to move the acquisition up to 2020 from 2022.

The price of a new icebreaker has been estimated to cost $1 billion. Coast Guard leadership has said that cost can’t come from its topline. During his speech, however, Zukunft said he was optimistic the fiscal year 2017 budget would provide enough funding.

“I have been in very active dialogue” with Capitol Hill, he said. “I would not be investing in [this] acquisition step … if I didn’t have any faith that in the future we will see an appropriation to address icebreakers.”

Congress allocated the Coast Guard $6 million in funding for a new icebreaker in fiscal year 2016. Zukunft said he has already used that money to hire a team of acquisition professionals.