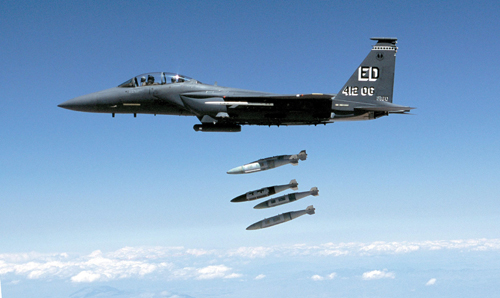 ORLANDO, Fla. — Unlike Russian forces in the Middle East, the United States is using precision-guided weapons to target the Islamic State’s main sources of revenue, which in turn should cripple the terrorist group’s operations and diminish its influence in the Middle East, an Air Force leader said Feb. 25.

“Daesh has some centers of gravity and our job is to understand and target” them, said Lt. Gen. Charles Brown, commander of U.S. Air Forces Central Command. “Most recently we’ve been very effective going after Daesh’s sources of revenue,” Brown said speaking at the Air Force Association’s 2016 Air Warfare Symposium. Daesh is an alternative name used by the U.S.-led coalition to refer to ISIL, or the Islamic State of Iraq and the Levant.

The same cannot be said for the Russian strategy in the area, he noted. They “are actually dropping down bombs and taking out a lot of civilians [and] in some cases they try to blame it on us,” he said. “It’s not the way to do business.” After the conflict is over, the next step is going to be working with the civilian population, he said.

Ninety-nine percent of the weapons that the Air Force deploys for Operation Inherent Resolve are precision-guided, Brown said. The “centers of gravity” that the service has been targeting with these weapons include banks and oil facilities. Since October the coalition has been zeroing in on oil transport, refining and distribution facilities in an operation known as “Tidal Wave II.” The commodity is the terrorist group’s main source of financing.

Brown mentioned two successful airstrikes under the operation during his address — one in late December that took out six gas and oil separation facilities, and one in mid-February that hit five financial centers in downtown Mosul, a city in northern Iraq that ISIL has occupied since June 2014. On Jan. 11, a coalition airstrike in Mosul also destroyed a cash and finance distribution center.
“That precision has been truly effective” Brown said, adding that the group has started to sell its oil at half price as a result of the Air Force’s efforts.

Another advantage to employing precision strike capabilities is that it allows the service to use its munitions more efficiently, he said. “We’ve dropped a lot of weapons — over 30,000 JDAMS [joint direct attack munitions] — but we use those to great effect.”

Using precision-guided weapons is critical in limiting civilian casualties, Brown said. “When all is said and done, part of what we’re also trying to do is support the population,” he said. “And if you just blindly start taking out [targets] and aren’t concerned about collateral damage and putting civilians at risk, when this is done, do they like Daesh better or do they like the coalition?” he asked.
In October, the U.S. and Russia signed a memorandum of understanding, which is focused on flight safety in the conflicted Syrian airspace. The MOU seeks to avoid in-flight clashes between the two nations. Russia’s airstrikes in the area are aimed at supporting the regime of President Bashar al-Assad, while the U.S.-led coalition backs the Syrian rebels and is using airstrikes to take out ISIL targets.

“The process is working out,” Brown said. But “it has gotten more complicated … because we’re flying closer and closer.”