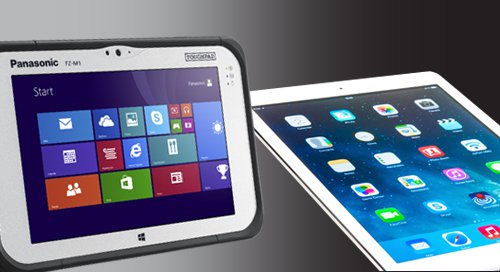 Microsoft is attempting to make inroads into the iPad-dominated military tablet market as the Pentagon and other federal agencies continue to increase their use of mobile devices.
The consumer tablet market tends to be an Apple versus Android battle, but in the government sector it is Apple against Microsoft,according to new report.

The Army is emerging as the government’s largest buyer of tablet computers, accounting for 31 percent of overall government purchases worth more than $99 million between 2012 and 2015, Govini estimates. The Defense Department overall buys 59 percent of all tablets sold to the federal government.

Although federal sales are a tiny sliver of the multibillion-dollar consumer market, there appears to be enough interest in this sector to motivate manufacturers to produce tablets with specific features demanded by military and government users. Microsoft, for instance, has sought to make more ruggedized tablets for the Army.

“Mobility and security are top priorities for defense organizations,” a Microsoft spokesperson says in an email. “With mobility devices, personnel can move seamlessly between PCs, virtual desktops, and mobile devices while maintaining access to apps, settings and their user data,” she says. “Our footprint in this space is strong and continues to grow.”

Microsoft has recruited manufacturers like Panasonic, Getac and Dell to build Windows tablets that seek to satisfy specific Defense Department needs, the spokesperson says. “These are rugged devices that have been tested to meet MIL-STD-810G standards that the Department of Defense requires, and include integrated Common Access Card (CAC) readers.”

The Panasonic FZ-G1 is used by the Air Force for flight line maintenance and by the Army for its “Reconnaissance and Surveillance Leaders Course” training. The Getac F110 has been purchased by the Defense Health Agency for combat casualty care. The Dell Latitude and XFR rugged tablets are found in some military intelligence brigades.

Microsoft says the Defense Department recently approved the company’s Surface devices to be added to the Defense Information Systems Agency “unified capabilities approved products list,” which means they have met security and interoperability requirements, the spokesperson adds. “This means that defense agencies can acquire Surface through common contract vehicles and blanket purchasing agreements.” Microsoft says it is offering government buyers ruggedized accessories such as the Kensington case that meet the MIL-STD-810G standard for drop protection.

Manufacturers now appear to see greater potential in the defense and broader national security market. “While consumer computing tablet purchases have plateaued as the market reaches saturation, the federal tablet market is still in its infancy,” the Govini report says. Agencies have been slow to jump on the tablet bandwagon because of security concerns but they are gradually catching on as their needs change. The military needs devices to keep forces connected on the front lines, and first responders have similar communications needs in disaster zones.

Apple’s iPad and iOS still lead by a huge margin, but are “rapidly losing market share to Microsoft Surface and Windows,” says Govini. Apple made a strong initial splash and grabbed 98 percent of the market in 2012. By 2015 its share dropped to 61 percent. As Apple dominance waned, Microsoft grew from virtually zero share in 2012 to a 25 percent share in 2015. Android moved up from 4 percent in 2014 to almost 11 percent in 2015.

The demand is driven by agencies that deploy personnel in the field. Second to Defense is the Department of Homeland Security, with 21 percent of the market, the report says. Within DHS, FEMA represents 78 percent of tablet purchases to equip disaster relief officials and has almost exclusively bought Apple. Customs and Border Protection, however, has shown a preference for Microsoft for its customs and border agents, the study notes, “illustrating that rugged tablets are in demand to operate in harsh conditions.”

Govini CEO Eric Gillespie says Microsoft made “big investments” in the federal market. “When Microsoft engineered a new tablet, agencies began to see that not only could they get the device, but they could also do application workflows and, in cases like the Department of Defense, get ruggedized tablets,” he tells National Defense. “That will translate to growth in federal sales of Microsoft tablets.”

Microsoft is moving more Windows applications that the government already purchases to applications that can be used on tablets, he adds. “If you look at where the Department of Defense is focusing and spending money, as well as strategic priorities in the ‘third offset,’ several are directly stated as human-machine collaboration, which would play directly into mobility and technologies like tablets. In terms of upcoming growth, we're going to see tablets used more and leveraged in strategic areas like that.”

Stove-Piped Systems Alive and Well in the Military