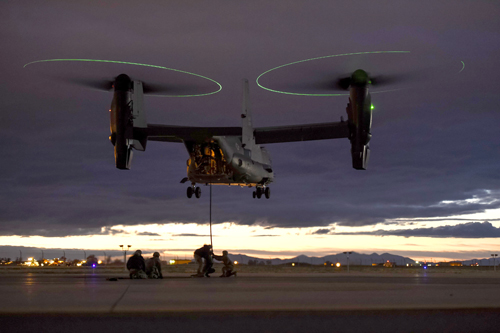 The service has 51 aircraft funded through fiscal year 2016, according to the 2017 Defense Department budget request released this month. Based on budget documents, the extra aircraft purchased in 2016 is meant to serve that reserve purpose. However, there are no other CV-22s requested within the Air Force’s future years defense program, meaning the service would need to fund three extra platforms in order to meet the commander’s goal.

It is necessary to have more of those aircraft in service because every once in a while an enemy weapon will make contact with a U.S. platform, he said. “We’re going to ding an airplane on occasion.”
AFSOC has already lost two of the tiltrotor aircraft in crashes — one in 2010 during a night raid in Afghanistan and the other in 2012 during a training accident at Eglin Air Force Base in Florida. During a third incident in 2013, three Air Force CV-22 Ospreys bound for the United Nations compound in the city of Bor in South Sudan were hit with gunfire while trying to evacuate U.S. citizens from the civil war-torn region.

Having four aircraft in attrition reserve as back-ups when an aircraft goes down will ensure that AFSOC forces are flying at its capacity of at least 50 airplanes well into the future, Heithold said.
The commander had no complaints about the current budget proposal noting that “U.S. special forces have been protected by the Department of Defense,” which has provided them with reasonable funding and manpower to perform their missions effectively. “I support DoD’s budget submission the way it’s written because I’ve been through the Army’s budget,” he said. In the 2017 budget request, the Army’s base budget was cut $1.4 billion from what was enacted in fiscal year 2016.

However, getting those extra aircraft into the budget before the production line ends is critical, he said. “I believe we need to try to get the attrition reserve V-22s at some point," he added. “It’s my job to make that argument that you need to buy … more V-22s before you buy the next bayonet or special forces” platform.