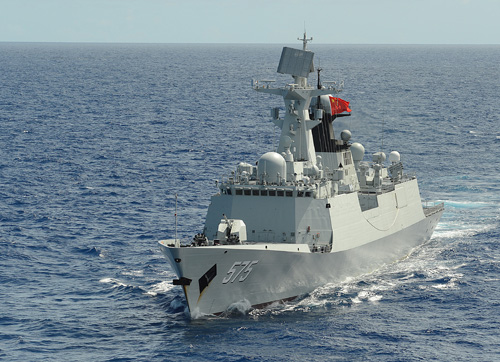 SAN DIEGO — China has an open invitation to attend this year’s Rim of the Pacific exercise, Adm. John Richardson, chief of naval operations said Feb. 19.
RIMPAC is the world’s largest international maritime exercise, which is held every two years in Hawaii. Richardson noted that the United States relationship with China is multi-faceted and emphasized the need to have a dialogue with the nation despite its troubling behavior.

China has been accused of eschewing international laws by claiming sovereignty over disputed islands in the South China Sea. It has also begun building man-made islands and this week came under scrutiny after it was reported that the nation had deployed surface-to-air missile on Woody Island.

“Our relationship with a nation as complex as China is not one dimensional,” Richardson said during the annual AFCEA/U.S. Naval Institute WEST 2016 conference. “While we have tremendous concerns [and] there’s certainly some uncertainty ... there are a number of areas where China seems to advocate and behave very much in accordance with international norms.”
These international laws, which were established after World War II, have greatly benefited Asia-Pacific nations, including China, he said.

Richardson noted that he keeps in close contact with his counterpart in the People’s Liberation Army Navy. “I think that’s very helpful so that we can have those conversations that we need to have about resolving that uncertainty and anxiety, expressing our concerns, but also looking for those productive ways that we can partner.”

The United States is open to dialogue and a partnership with China, but it is still concerned about the nation’s actions, he said. While “we want to fight the temptation to collapse this thing to one dimension, we've got to be smart about it. I don’t mean to be saying that we are naïve in any sense, but neither can we be kind of one dimensional about it.”

A day earlier at the conference, Adm. Scott Swift, commander of U.S. Pacific Fleet, said many U.S. allies in the region have expressed great concern about China’s actions. Even if the United States were to station every one of its naval ships in the region, that would not be enough to allay some of those worries, he added.

Meanwhile, Richardson emphasized a need for increased innovation in the Navy. In the recently released president’s proposed fiscal year 2017 budget, the sea service set aside funds for a new rapid prototyping experimentation division, he said.

“The first step is we’re going to bring together a kind of a body of technical experts so that when we get an urgent need ... we’ve got a broad enough perspective to make sure that we’re not missing some element of a technological or operational solution to that problem,” he said.

Starting out with just a small amount of funding will allow the service to bring ideas together, prototype them quickly and put them in the hands of sailors and Marines for experimentation, he said.
The service has also established the maritime accelerated capabilities office, a kind of speed lane to push through more established and mature programs and move them “through the wickets a little bit faster,” he said.

In the fiscal year 2016 National Defense Authorization Act, Congress gave the service chiefs additional authorities when it came to acquisition, Richardson said. He will use these new authorities to speed up the acquisition process, he added.