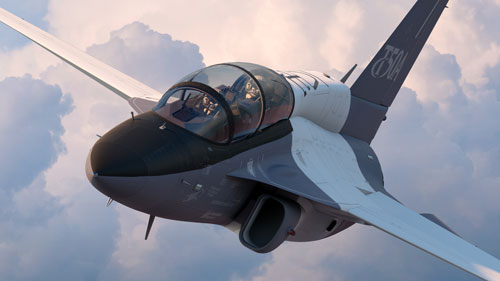 After considering a clean-sheet design for the T-X program to replace the Air Force's aging fleet of T-38 Talon jet trainers, Lockheed Martin has chosen to stick with a modernized version of an aircraft it developed with Korea Aerospace Industries, the company announced Feb. 11.

The company's entry for the T-X program is the T-50A, an upgrade to the T-50 platform. For the T-X competition, Lockheed is up against clean-sheet proposals from both Northrop Grumman and a Boeing-Saab team, in addition to the T-100 developed by Italy's Alenia Aermacchi and Textron AirLand's new design for the Scorpion, a commercially based aircraft designed for military use. The winner of the Air Force program will replace 350 T-38s with an average age of about 50 years.

Before deciding on the modernized T-50, the company conducted a study within its Skunk Works division that designs and develops new and advanced technologies. The group was tasked with putting together a clean-sheet proposal for the T-X program, in addition to examining the costs and schedule of taking an existing T-50 and upgrading it, said Rob Weiss, executive vice president and general manager for Lockheed Martin advanced development programs.

The study was recently completed and the company decided to cease work on a clean-sheet alternative after finishing 80 percent of the detailed design activities, he noted. The new aircraft "was very capable and it would do everything that the U.S. Air Force is looking for in the T-X aircraft, but when it came down to evaluating that clean-sheet design, we really came to four conclusions" that prompted Lockheed to avoid that route, Weiss said.

The company found that a clean-sheet proposal would be too costly, result in schedule delays, have too much associated risk and would not increase capability beyond what the T-50 could offer, he said.

A new design would have been eight times more costly than upgrading the T-50, he noted. Procuring a modernized T-50 would benefit the Air Force's current budget because the aircraft would need little funding for engineering and manufacturing development, he added. Most of the money allotted for the T-X trainer could be transitioned from EMD money to production money with the T-50 offering, he said. That would allow the service to begin buying airplanes earlier.

Additionally, in order to meet the Air Force's initial operating capability goal of 2024, a clean-sheet design would entail "a substantial and unacceptable amount of concurrency of the development program with the production program, which means you're having to buy airplanes well ahead of where you will be in the development of the program," he said.

Having the T-X trainer meet that IOC goal is imperative because there is a short window for the platform to be funded before the service hits a budget crunch in the mid-2020s, Weiss said. "Out in the mid-2020 timeframe, a lot of production dollars are going to need to be focused on the KC-46 tanker, the long-range strike bomber and the F-35. So there's a huge demand for production funding out in the mid-20s and the Air Force's idea here was to get the T-X program in now while the budget is available."

Not only does the company think it can meet the 2024 deadline, it believes it can push that timeline up four to five years, Weiss told National Defense following the announcement. "We could basically begin building and delivering airplanes if somebody wanted to make that decision sometime in the mid to late-2017 timeframe," he said. On that schedule, "probably somewhere in 2018 — 2019 latest — you would have" initial operating capability.

The modernized T-50 would reduce risk, according to Weiss, who said there are already 100 of the aircraft flying today, with more than 1,000 trained pilots and 100,000 flight hours.
The production line that the company is setting up is "warm," he added. "When we say warm, what we are really saying is that the whole supply chain is already active, supporting the T-50s in [South] Korea," he said. "If the U.S. Air Force was to say, 'We want to move forward on a T-50 solution,' we can begin producing airplanes immediately and move them soon there after out of Greenville." The company has selected Greenville, South Carolina, as the final assembly and check-out sight for the program.

Mike Griswold, T-50 business development director for Lockheed Martin, listed those capabilities as inflight refueling, a fifth-generation cockpit, embedded training and an open systems architecture. The additions were tailored to Air Education and Training Command's requirements for the jet trainer replacement, he said.

To increase commonality between fifth-generation fighters and T-50A, many of the additions are similar to what would be seen on an F-16, F-22 or an F-35, the Lockheed executives said.
The inflight refueling receptacle is located in the same area as those aircraft "right behind the canopy on the dorsal area," Griswold said. "I think this is very important because that training that the student gets in the T-50A for refueling will transition 100 percent into fifth-generation training."

The cockpit is also similar with the same physical display size and near identical visuals as the F-35 joint strike fighter, he said.

The company described the embedded training suite as a "flying simulator." It allows the jet trainer to simulate "all the weapons and sensors of the fifth-generation aircraft — the radar, the electronic warfare, the data links, the missiles and bombs," Griswold said. An instructor can introduce different realistic training scenarios with increasing complexity as the student progresses through the program, he said. It enables the student to experience these different scenarios, while also reducing costs, he noted.

The last addition, the open architecture piece, enables the service to make changes to the mission systems suite without having to go back and consult with the original equipment manufacturer, Griswold said.

Weiss said, "The development is near complete today and within months we'll have that block upgrade into two of the T-50 aircraft." The two production aircraft, which will consist of the same configuration that the company would delivery to the Air Force, would be ready for a flight evaluation by the service sometime late summer or early fall. The aircraft will attain production-ready status by the end of 2016, he said.

The major structural components of the Lockheed trainer — the airframe, fuselage, tails and wings — will be assembled overseas in South Korea and then transferred to the facility in Greenville for final assembly, the executives said. Most of the missions systems will be made within the United States including the ground-based training system, which will be developed by Lockheed, and the engine, which is manufactured by General Electric.

Request for proposals for the T-X trainer competition are expected this September. Lockheed plans to have its proposal submitted by the end of December, Griswold said.

What Keeps Naval Aviators Up at Night: Fear of Not Flying