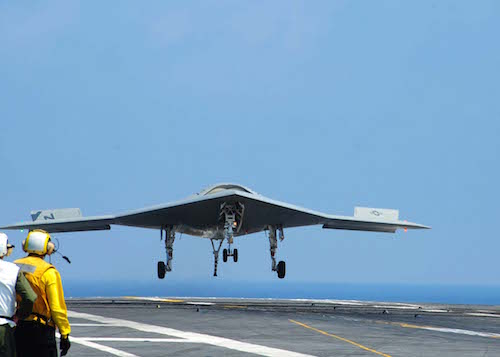 As it reconsiders its unmanned aviation strategy, the Navy has decided to cease funding the X-47B bat-winged drone that made aviation history in recent years.
The first-ever autonomous unmanned aircraft to be launched from and recovered on a carrier deck, the X-47B, is likely to run out of funding by the end of fiscal year 2016. The Navy has not requested money for the program in its fiscal year 2017 budget.

There is still a chance, however, that the aircraft could fly again, he said. The Navy received $250 million in fiscal year 2016 for “risk reduction activities” for a future drone known as the unmanned carrier launched strike and surveillance, or UCLASS. The Naval Air Systems Command will “evaluate what surrogate aircraft activities, including further X-47B operations, are cost effective to meet these risk reduction goals,” Duarte said.

The latest decision regarding the X-47B caps off a complex turn of events for this program since the Navy awarded Northrop Grumman a contract in 2007 to build a carrier combat drone.
The company produced two of the tail-less, strike fighter-sized unmanned aircraft — dubbed Salty Dog 501 and Salty Dog 502. The Navy was ready to mothball them in the summer of 2015 and send them to an aviation museum, but reversed course in the face of congressional backlash. Lawmakers chided the Navy for abandoning the program at a time when other nations are rushing to develop advanced combat drones and anti-ship missiles that would make long-range aircraft like the X-47B more valuable in a future war.

The X-47B in August 2014 took off and landed alongside a manned F/A-18E Super Hornet fighter. In April 2015, it made aviation history again with the successful completion of the first-ever autonomous aerial refueling of an unmanned aircraft.

A Northrop Grumman spokeswoman declined to comment on the 2017 budget decision.

Scott Winship, Northrop Grumman vice president of advanced air warfare, told reporters last month during a media tour of the company’s aviation facilities in Palmdale, California, that he was hopeful the Navy would continue to fund the X-47B.

The aircraft has only flown a fraction of its projected service life, he said. “It’s a 55,000-pound airplane, carries 4,000 pounds of bombs. And there is room for additional sensors.” The achievements of this aircraft are extraordinary, but more work is needed to push the technology further, Winship said. “You can’t say that landing and taking off a carrier 15 times or plugging a probe/drogue one time proves that it works operationally,” but more testing and experimentation could help the Navy gain confidence that unmanned aircraft can be integrated into the carrier wing, he added. The next step would be to make them fly in a combat-realistic scenario. “We always did our takeoffs and landings aboard a clean deck, in calm seas, with nobody else around, only watching one airplane come onboard, that’s not the operational type of dance the Navy does.”

With more time and effort, the X-47B could show Navy leaders the art of the possible, he said. “We’ve outlined a plan to finish the program we started in 2007 that was truncated.”

The airplane was designed for 16,000 hours of service, Winship said. As a prototype, it would be allowed to fly just 4,000 hours, but the Navy only agreed to 400 hours, he explained, “Because we didn’t build a full scale ‘bend and break’ article.” So far, “We’ve used 70 hours of the 400.” The airplanes that are now at Patuxent River, Winship said, have 80 percent of their life left.

The apparent end of the X-47B program comes as the Navy rethinks its broader strategy for deploying unmanned aircraft aboard big-deck carriers. Officials announced this week that the UCLASS program is morphing from a strike/surveillance drone to a carrier-based unmanned aerial refueling tanker. The new initiative, known as a carrier-based aerial-refueling system, or CBARS, is seen as a potential “combat multiplier” for the air wing that would help to extend the range of manned Navy fighters.

Military Use of Unmanned Aircraft Undeterred by Drone Backlash