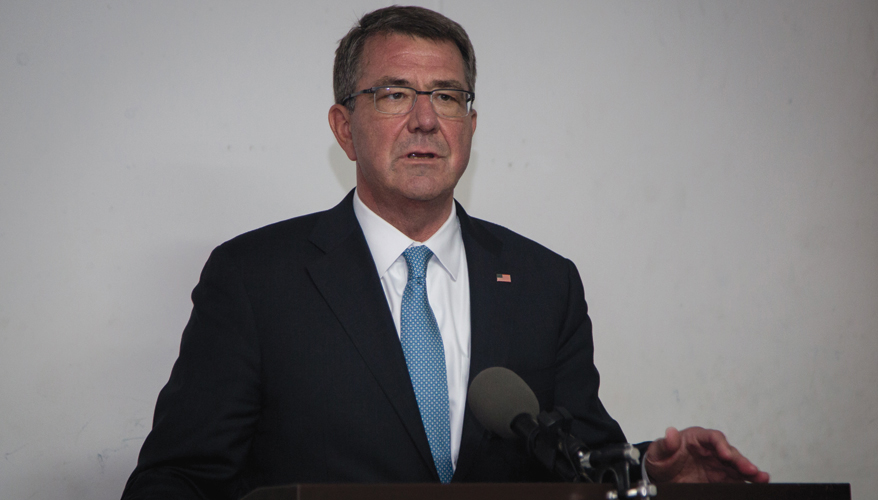 During a closed-door meeting with top industry executives last month, Defense Secretary Ashton Carter once again sought to drive home the message that companies need to break out of their cocoon to help the Pentagon bring the next wave of innovation.

The conversation touched on familiar topics, according to participants, but Carter seemed especially animated by one executive’s comments about a recent industry “speed-dating” event where commercial startups were invited to hear about business opportunities with defense contractors.

“His eyes lit up when Raanan talked about this,” recalled Bob Edmonds, vice president of Elbit Systems of America.
Elbit CEO Raanan Horowitz gave Carter a brief account of the matchmaking event, hosted by tech startup SwitchPitch, where major defense contractors sought to attract commercial innovators that typically do not do business with the government.

This sounded like the type of outreach Carter had been wanting to see in the defense industry as Pentagon officials have grown increasingly worried about the military’s eroding technology edge and the cultural divide between the commercial and defense sectors. The most innovative industries in decades past were embedded in the defense establishment, but they now live in separate worlds. Carter and others fear that the Pentagon and its top contractors have built walls around the sector, keeping out innovators and creative thinkers.

The SwitchPitch model is one of many avenues that defense contractors are pursuing to “see what’s out there,” Edmonds told National Defense.

A four-year old venture, SwitchPitch was created to offer scrappy startups and small businesses an opportunity to break into corporate America. The meeting the company hosted in September in Arlington, Virginia, was the first one that focused on the defense and aerospace markets.

About 50 startups attended from across the country. Seven projects were pitched by BAE Systems, Harris Corp. and Elbit Systems, and 98 speed-meetings were held between large contractors and startups. Jerry McGinn, the Defense Department’s principal deputy director of the manufacturing and industrial base policy office, spoke at the event about the Pentagon’s desire to create new paths into the defense market.

Everyone seemed pleased by the results, said Michael Goldstein, president of SwitchPitch. The positive reaction speaks to the vast appetite for innovation in defense and aerospace, he said. The company provides a software-as-a-service platform for large companies to manage their startup and small-business engagements.

Glacier Point, a defense industry consulting startup, was hired to help organize the meeting and vet the participating startups. “We were seeing a major demand signal for non-traditional sources of technology,” said CEO Jeff Ryder.

The conventional wisdom that the defense sector is not appealing to the tech world does not apply in this case, Ryder said. “Startups were thrilled to be able to get into targeted conversations with multibillion dollar companies. It wasn’t abstract. They asked for specific things.”

The aerospace and defense companies are “getting the message that we need to spend more time outside of our world and participate more broadly in the technology ecosystem,” Ryder said. There are products out there that defense contractors don’t even realize exist, he noted.

Beyond the initial “discovery” phase, the next step is to figure out the business model for injecting startups into a “repeatable process in a defense company,” said Ryder. “That part is still in development.”

In the wake of Carter’s initiatives to court tech firms around the country, Ryder sees a huge opportunity to spread the SwitchPitch matchmaking model across defense agencies and military services.

These are areas where the Pentagon is seeking “discriminating advantages in the future,” said Edmonds.
After hearing the presentations, the startups introduced themselves to the large contractors in a round of nine-minute “speed dating” sessions.

It was an eye-opening experience, said Elbit’s Chief Innovation Officer Doug Sandklev. “We heard about technologies we didn’t know were available.”

One such surprise was a product to help identify legitimate 3D-printed parts from counterfeits. A company named InfraTrac offered it as a solution to the aerospace industry’s growing anxiety about the proliferation of rogue components. A chemical “fingerprint” is inserted into the layers of material, and companies can detect it using a commercial chemical analyzer.
Sharon Flank, founder and CEO of InfraTrac, said the company has worked primarily in the medical devices and athletic footwear sectors, and is now becoming aware of promising opportunities in aerospace and defense. “I’ve seen printers that print circuit boards and connectors,” she said. “Counterfeit electronics is a big issue.”

Following the SwitchPitch event, Flank was invited to follow-up meetings at Elbit and BAE Systems, she said. “We’ll see what happens.”

Sandklev said many of the startups are wary of working with defense companies for fear of inadvertently giving away trade secrets. “Intellectual property issues are a top concern,” he said. There is no clear-cut answer to protect small businesses from the “big integrator taking his idea and running with it.”

The solution is probably a combination of teaming and licensing arrangements, Edmonds said. “We try to create a win-win.” There are times when large defense contractors will decide to buy a company so they can take ownership of the IP. “Do we look for targets to buy? Yes,” he said. “If there’s a conversation where the company entertains acquisition, it can happen.”

Ryder agreed that, of all the headaches that startups try to avoid in pursuit of government contracts, none is more daunting than the protection of IP. “Depending on the level of engagement, the barriers are not that bad,” he said. “Government contractors could do a better job articulating how they could work better with commercial companies.”

He expects more of the Pentagon’s large contractors will be motivated to work with startups, not only because of potentially lucrative IP but also to help change established companies’ culture and business models, Ryder said.

“Startups can move very quickly,” he said. “Having startups in your portfolio should have a cultural impact in terms of learning how to do things more quickly.” Commercial tech companies, unlike what some analysts have speculated, are not a threat to defense contractors, said Ryder. “A lot of contractors need to think about fundamental changes to their business models.”

John Kelly, vice president of business development at BAE Systems, said he found the SwitchPitch approach “quite effective.” What they offer are not “exquisite DoD needs” but technologies that the military is eager to acquire to modernize aging systems. “I went looking for three things and found five.”

He does not see IP issues as deal breakers. “We can license the IP, perhaps we can acquire the company. There are legal frameworks for that. Those problems have been solved.”

There are however unresolved questions about how the defense industry will integrate commercial technology and whether companies are truly committed to an “open systems” approach.

The issue was raised recently by Air Force Gen. Paul Selva, vice chairman of the Joint Chiefs of Staff. “For those of you in industry, I can’t tell you how many times I’ve asked the following question: ‘Will your widget subscribe to an open architecture?’ Answer is always, ‘Oh sir, of course.’” But when the government asks for a new upgrade to make the system more useful to the military, the response is, “Oh, sir, we can’t do that. It is an open architecture but only inside of our company or only inside of our proprietary IT,” Selva said at a Center for Strategic and International Studies forum.

The innovation sought by the Pentagon, said Selva, requires “resilient open architecture to which all of our systems can subscribe, and we’ve only scratched the surface on that.”

Kelly said the industry is well aware of these demands, and he cautions that commercial startups are just as leery of open systems as defense firms because they want to protect their IP. “DoD doesn’t want proprietary systems any more,” Kelly said. “But small companies, as they transition from commercial to defense, have to understand DoD doesn’t want to buy significantly IP-restricted systems.”

The massive flow of private investment into startups has created expectations in the Pentagon of faster, less costly development, Kelly noted. “But some of the constraints in the federal acquisition regulations are challenging when it comes to leveraging commercial technology,” he said. “DoD is trying to work through those issues.”

The push for innovation that Carter has championed, meanwhile, has spawned a broader debate about the Pentagon’s rigid ways and whether change also needs to happen from within. That has been the theme of an annual gathering of military officers and industry executives at the University of Chicago dubbed “Defense Entrepreneurs Forum.”

The forum’s executive director, Jim Perkins, is an Army engineer who has long been frustrated by what he describes as hidebound thinking across the Defense Department that stifles innovation.

“Our mission is to change the culture in the military,” he said. “We are incredibly bureaucratic and risk averse.” When the military is overseas fighting wars, commanders are allowed to take risks with technology if it might help win or save lives, he said. “But when we come back to the United States, no matter what your idea is, we categorically tell you, ‘No.’”

One encouraging development was the creation of the Defense Digital Service, he said. A Carter initiative, the DSS was set up to fix technology problems and was given authorities to cut through the bureaucracy. “It’s very empowering, and has made a lot of impact so far,” said Perkins.

In the grand scheme of things, the key is to develop leaders who are not afraid to innovate, he said. “We are not cultivating ‘out-of-the-box’ thinkers.”