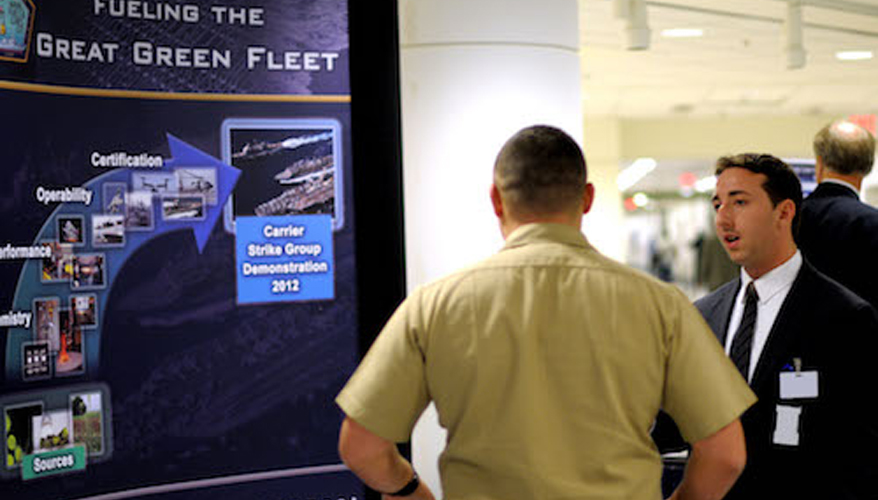 Anticipated actions by the Trump administration and Congress should lead to a significant rollback of the Pentagon’s renewable energy and climate initiatives.

With the incoming administration poised to dismantle Obama’s clean energy and climate policies, the Pentagon could soon begin to phase out controversial programs like military biofuels and portable nuclear reactors.

Trump has pledged to end policies that “undermine and block America’s fossil fuel producers,” rescind “job-destroying executive actions,” end the “war on coal” and scrap Obama’s “climate action plan and the clean power plan.” The president-select has nominated leaders for the Environmental Protection Agency and the Energy Department whose views are diametrically opposed to those of the outgoing administration.

Many of the Pentagon’s clean-energy programs, however, might be hard to undo as they are tied to the military mission or meet a specific tactical need. The military and intelligence communities’ climate focus also is rooted in security concerns.

As a war commander, defense secretary nominee retired Marine Corps Gen. James Mattis was a vocal advocate of energy-saving initiatives. He made headlines for speaking out about the military’s heavy dependence on fuel and calling for new approaches to manage and provide energy in the battlefield.

Pentagon energy initiatives that reduce the military’s logistics burden should continue to receive support, but more comprehensive efforts by the Defense Department to increase use of renewable energy and curb the effects of climate change — programs that served as an extension of Obama’s national energy policies — are not likely to survive, experts say.

“It’s not uncommon for an incoming administration to want to clear the slate,” says Sharon E. Burke, a senior adviser at New America, a Washington think tank.

“I just hope they have common sense about it and don’t throw away projects and programs that really support war fighter needs,” says Burke, who in 2010 was named the first-ever assistant secretary of defense for operational energy plans and programs.

Burke speculates that Mattis will stick with energy programs that are clearly “core defense,” she says. When he led troops in Iraq, “Mattis considered operational energy issues to be in support of the war fighter.”

Mattis commanded the 1st Marine Division in 2003 in Iraq and worried his troops were slowed down by fuel resupply lines that could not keep up. He later commented that the Defense Department should take action to “unleash us from the tether of fuel,” a sound bite that became part of the war’s lore. As the military became more deeply entangled in war zones, policies to address energy dependence became a top priority of the George W. Bush administration. Military officials grew frustrated during deployments in Iraq and Afghanistan as forces became highly dependent on fuel convoys that were frequent targets of enemy attacks.

Mattis’ quote about the tether of fuel has been interpreted to mean different things, Burke says. “I got it from the source that he was talking about battlefield limitations, the way fuel demand affects your ability to conduct a mission,” she says. That reality has not fundamentally changed 15 years later. “I wouldn’t presume to know what’s on his mind now but I don’t see any reason to believe he would have changed his thinking,” Burke says. “He’s a brilliant strategist. If he makes a statement like that based on his experience in combat, unless the situation has dramatically changed I don’t think he would have changed his mind.”

The military over the past decade has embraced renewable energy — such as portable solar panels to charge radios and cell phones — as a tool of war. “There is an authentic demand for [non-fossil] battlefield energy sources,” Burke says. “I don’t see this as being ideological about energy, it’s about the war fighter and the mission.” For organizations like the Marine Corps that regard themselves as quick-response forces, reducing fuel demand is “existential, it’s part of their identity.”

The Pentagon will probably not abandon these efforts, but some of the more ambitious renewable initiatives pushed by the Obama administration likely will be axed, Burke says. Congress in recent years has been particularly critical of a costly effort to develop drop-in alternative fuels for military aircraft and ships. “I don’t expect the Trump administration will continue to invest in military biofuels.”

The Pentagon has led the Obama administration’s push to increase the federal government’s use of renewable energy. Some of the nation’s largest military bases across the country have signed long-term deals with private companies to provide clean energy. The Trump administration may find that these privately financed projects make sense from a business standpoint, Burke says. Third-party financed programs have been effective, she adds, and do not drain government resources. “You wish they wouldn’t throw the baby out with the bathwater.” Market driven changes in the energy market cannot be reversed by executive order. “It’s the policy driven change that they will likely do away with.”

More controversial alternative fuel research programs like portable nuclear fusion reactors might be sidelined by the Trump administration. The Defense Science Board has studied the applicability of this technology, says Burke, but it is a “stretch as far as a military necessity. The case for military utility is not there.”

Congressional Republicans — who years ago put a bull’s eye on the Navy’s high-profile biofuels program — will be taking action to terminate the project as soon as the new Congress is sworn in. The conservative bloc known as the “freedom caucus” announced that it will move to reverse environmental regulations across the federal government in its first 100 days. An Obama 2013 executive order directs government agencies to prepare for climate change.

Projects to develop and test alternative fuels are especially disliked by conservative lawmakers. “Billions of dollars have been sunk into this program for years,” noted a freedom caucus report. Clean energy mandates are characterized as “corporate welfare … burdensome, costly, implausible to comply with. … And part of the green agenda being pushed by the left.”

Obama’s Navy Secretary Ray Mabus has been the administration’s most visible champion of military green-energy programs. A spokesman for Mabus declined to comment for this story. In an interview with Defense News this month, Mabus rejected criticism of biofuels as luxury items. He said green fuels now cost about the same as conventional jet fuel. “I think that’s going to be a lasting legacy,” he said of the military biofuel program. “To roll that back just means you're going to make us a less effective force.”

A strong anti-science bent in the Trump administration regarding climate change could collide with military strategy that considers the effects of global warming — like rising sea levels and devastating storms — a security concern as forces often must respond to natural disasters and provide humanitarian assistance in areas like the Caribbean and Asia Pacific. U.S. Pacific Command has adopted policies to ensure the readiness of U.S. forces to respond to increasingly destructive storms in the region.

Burke predicts the Pentagon, and especially the uniformed leadership, will continue to champion energy and climate efforts. “They may not put out press releases but I think they will keep going.”