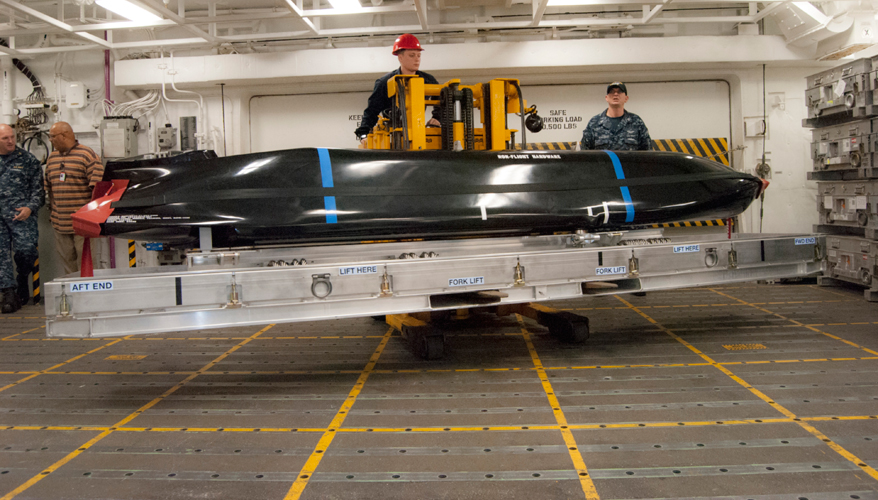 U.S. Pacific Command asked the Pentagon in 2009 to rush the development and production of sophisticated long-range missiles that, officials insisted, the United States needs in order to stay a step ahead of its enemies.

The Pacific region is far less of a powder keg than the Middle East, but leaders there worry about reasonable hypotheticals like a North Korean nuclear crisis and military provocations by Beijing. PACOM chief Adm. Harry Harris recently accused China of acting in an "aggressive" manner as it builds artificial islands in the South China Sea, and cautioned that the United States should be ready to respond.

The devastating anti-ship cruise missiles that PACOM wants — with semi-autonomous navigation and artificial intelligence features to distinguish hostile from friendly targets and penetrate enemy antiaircraft batteries — typically would require 10 to 15 years to develop and produce in the Pentagon’s traditional procurement system.

So it is now widely viewed as a success that the Navy is poised to test-launch a new 2,200-pound long-range anti-ship missile, known as LRASM, from an Air Force B-1B bomber some time in 2017.

Had the Pentagon pursued a clean-sheet design, a seven-year delivery timeline would have been unthinkable. Frank Kendall, the Defense Department’s top weapons buyer, turned to the Defense Advanced Research Projects Agency for ideas on how to compress the cycle. He asked the agency for an “accelerated acquisition pilot.”

DARPA engineers proposed reusing an existing weapon. They reckoned that by using a mature airframe and agile software development methods, a weapon that met PACOM demands could be ready by 2018.

For the airframe, they chose the Air Force’s joint air-to-surface standoff cruise missile, known as JASSM-ER, made by Lockheed Martin. The Naval Air Systems Command took over the program in 2014.

The idea was to minimize the risks associated with unproven technology. DARPA started out with a traditional waypoint following cruise missile like JASSM and gave it an electronic “brain” that makes it semi-autonomous. The Air Force designed the JASSM to hit deeply buried targets and advanced air defense systems.

“Because of the urgency of the program we found the only way to make that timeline was to take the best airframe that we could find, JASSM ER, and put all the DARPA technologies they were developing into that airplane,” Engdahl said in an interview.

The LRASM is 85 percent common with the JASSM, he said. “We didn’t have to worry about engines, aerodynamics, structures. We were able to put all the smart technology and the sensors into the airframe.”

Defense officials see this program as a case study in how the Pentagon can acquire vastly improved weapons that may be only the “80 percent solution” but can be delivered faster than the ideal system.

It also helped move things along that Lockheed Martin committed $16.8 million in capital funds for the expansion of its assembly plant in Troy, Alabama. The company expects the Navy to order 124 LRASM missiles — 110 will be production missiles, and 14 will be used for tests. These weapons can cost anywhere from $700,000 to $1 million each.

Lockheed Martin funded tests as well. In a series of demonstrations, it showed how LRASM could be fired from a ship.

“Lockheed funding tests does make things go faster,” said Engdahl. “They went to the desert ship at White Sands Missile Range and spent a significant amount of IRAD money to investigate packaging LRASM inside the Mark 41 launch tube.” The Navy currently does not have a funded program for a ship-launched LRASM, he said. “If that requirement were to come to fruition, the company would be ready to provide that.”

Engdahl noted that the 124 missiles in the current procurement plan are an “interim capability” to fill PACOM’s requirement until the Navy can develop a more advanced “offensive anti-surface warfare” missile in the coming years.

“We are still doing the analysis,” he said. The Navy is not lacking in highly destructive munitions right now so there is no rush to start a new program. “We have Harpoon and JSOW C-1 just fielded as an anti-ship system,” he said referring to the Joint Standoff Weapon made by Raytheon. “We have quite a few of those weapons, almost 1,000 fielded.”

JSOW C-1 is one the Navy’s most technologically sophisticated missiles as it can be retargeted in mid-flight from the launch aircraft.

The LRASM gives the Navy new gee-whiz technology for ocean warfare. Autonomy in missiles is not new, Engdahl said. “We’ve been fielding semi autonomous weapons since the 1970s.” The Harpoon finds targets with mid-course guidance, opens up the radar seeker and searches. The LRASM is similar in that once it’s targeted it cannot be reprogrammed in flight. “But it is much smarter than Harpoon,” he said. It uses radio-frequency sensors to identify ships in multiple ways. “It's a much more precise and stringent semi autonomous capability. There is a very low probability that it would ever misidentify a tanker or a civilian ship.”

Engdahl’s office has simplified the red tape as part of the deal to fast track the program. “We are doing accelerated reviews, tailored documentation requirements. We combined all the testing into integrated test and evaluation, and we are combining developmental and operational testing,” he said.

The B-1B flight tests are scheduled to start this summer.

The bomber was the obvious platform to start because the JASSM is already integrated, said Alan Jackson, Lockheed Martin Missiles and Fire Control’s director of strike systems. “We have not modified flight characteristics, so we’re seamlessly integrating in the B-1, eliminating time and expense,” he told National Defense.

The company agreed to invest in the production facility in anticipation of larger orders, he said. “We are trying to get in front of the demand. The air-launched LRASM would be easily adaptable to a ship-launched configuration.”

The B-1 configuration should be ready for operational use by fall 2018, he said. The Super Hornet variant will take at least another year. “JASSM ER has not been fully integrated,” said Jackson. The missile has been installed respectively in Australia and Finland’s F/A-18 A/B and C/D fighters. “The E/F is a new platform for us. That’s additional work to be done.”

Under a separate project led by the Defense Department’s strategic capabilities office, the Pentagon is pursuing other ship killing weapons that would beef up PACOM’s arsenal. Earlier this year, the SCO announced it has converted the Navy’s Standard Missile-6 — a ship-launched air-defense weapon designed to shoot down hostile aircraft and missiles — to attack enemy ships

Defense Secretary Ashton Carter in October unveiled a new SCO initiative to take the Army tactical missile known as ATACMS, and equip it with a different seeker so it can hit moving targets at sea. The ATACMS was designed to hit ground targets. The modified version would be able to target ships from the shore 300 kilometers out at sea.

Lockheed Martin is the manufacturer of the ATACMS but has not been involved in the modification project. “Although not currently under contract, Lockheed Martin would be pleased to provide solutions for a cross-domain capability,” said spokesman John Kent.

Former NAVAIR commander, retired Vice Adm. David Dunaway, said programs that repurpose existing systems make a lot of sense. “Almost 99 percent of the problems we have today we can fix with existing technology,” he said. “LRASM is basically stringing existing technologies together into the outer line of the JASSM and doing integration work. There’s no invention,” he said. “It’s a tremendous capability from existing technology. There’s a lot that can be done in that regard.”

Modifying the ATACMS for naval use is an astute idea, he said. “I am a huge believer in never taking a knife to a gunfight,” said Dunaway. “Many of the problems we have today can be solved with integration.”