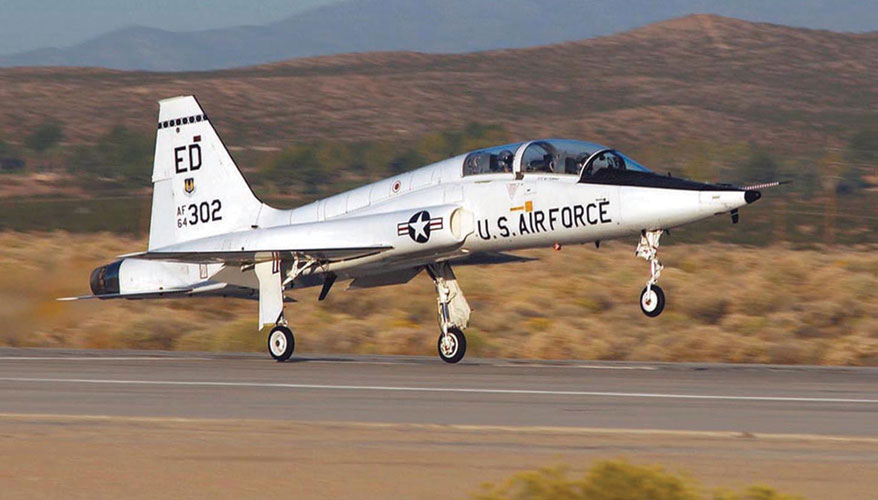 The T-X program aims to replace 431 T-38 aircraft.
The stakes are high for four major military jet manufacturers as the Air Force prepares to formally kick off the competition for its new jet fighter training system, analysts said.

A final request for proposals is expected by the end of December for the T-X jet trainer program. Four teams — led by industry giants Boeing, Lockheed Martin, Raytheon and Northrop Grumman — are vying for the $628 million contract, which will initially call for 350 aircraft, along with a number of ground training systems.

“You have this big export market that could add 200 units, 300 units on top of the Air Force buy,” he said.

The T-X program aims to replace 431 T-38 aircraft, with initial operating capability scheduled for 2024 and full operational capability expected for 2034, according to the Air Force.

Any country that operates an advanced jet trainer — such as the German and Turkish air forces — could be a potential customer for T-X, Jaworowski said.

The world trainer market is valued at about $3 billion per year, and the T-X program is “easily the most important competition” in the high-end jet market, according to a recent report by the Teal Group, an aerospace and defense market analysis firm.

“It’s almost impossible” for the Air Force not to proceed with replacing the T-38 fleet, said Richard Aboulafia, Teal Group vice president of analysis, citing “the sheer age of the T-38” as a main factor. The Air Force continues to perform upgrades on the aircraft, which will be over 70 years old by the time it is retired.

“They announced recently that the T-38 would be re-winged again, the cockpits are all new … but you’re still talking about half-century-plus” aged aircraft, he said.

Fewer than 800 Western high-end jet trainers have been delivered worldwide over the past 20 years, according to the Teal Group report.

“In other words, for any major U.S. airframer and anyone in the world building a trainer in this class, it is impossible to not compete for this requirement,” the report said.

The competition is balanced between two teams with off-the-shelf aircraft — Lockheed Martin with Korean Aerospace Industries’ T-50A and Raytheon and Italian manufacturer Alenia Aermacchi’s T-100 — and two clean-sheet designs from a Boeing-Saab partnership and Northrop Grumman with BAE Systems and L-3.

In theory, an off-the-shelf product could be less costly, since you don’t have the development expenses that a clean-sheet design would have, Jaworowski said.

“Since it has been in service, it has proven reliability, you know what it’s going to do, whereas with a clean-sheet design, you have to prove that all out in flight testing,” he said.

On the other hand, one advantage of a clean-sheet design is a company is able to “optimize it specifically to the Air Force program,” he noted.

More than one defense contractor’s future in the tactical aircraft market hangs upon the contract award, Jaworowski said.

“Northrop or Boeing’s future in the tactical aircraft business is, in a certain sense, up for grabs with the T-X contest,” Jaworowski said. As production slows over the next few years on the Boeing-produced F-15 Eagle and the Boeing/Northrop-developed F/A-18 Hornet, those companies may be in jeopardy of no longer holding a prime contract in the tactical aircraft market, he said.

“Lockheed is going to be in the tactical aircraft business whether it wins or loses, because of the F-35 [joint strike fighter],” he said.

Northrop will be the prime contractor on the B-21 long-range strategic bomber. Boeing has floated designs for a Super Hornet replacement, but “the Super Hornet’s going to remain in service for years now,” he noted. “If Lockheed wins, you could see a situation where [it] really is the sole U.S. manufacturer of tactical military aircraft.”

The T-X program will ensure the next wave of pilots can learn to fly fifth-generation aircraft, like the F-35.

Pilot training gaps widen and continue to do so every year as the service brings on more fifth-generation aircraft, said Lt. Gen. Darryl Roberson, commander of Air Education and Training Command, which oversees the T-X program.

The T-38 has been a “formidable, reliable trainer, but to provide some perspective, 1961 is the year that John F. Kennedy entered office,” Roberson said via email. “Today, the T-38 lacks capabilities we absolutely need to prepare our pilots for fifth-generation aircraft.”

As industry awaits the final RFP release, funding remains the biggest hurdle to the T-X program, Aboulafia said. Concurrent Air Force programs including the F-35, the B-21 and the KC-46A tanker come with their own extensive funding challenges, and the T-X will have to compete with them in congressional budgets.

“We know we have to fit all of these important programs into our limited budget,” Roberson said.

The T-X is one of four Air Force “Bending the Cost Curve” initiative pilot programs — along with the B-21, the multi-adaptive podded system and the space-based infrared radar system — to optimize program value, Roberson noted. Air Force Secretary Deborah James introduced the initiative in 2015 as a way to work with industry to keep from inadvertently contributing to rising costs, stifling innovation and slow processes.

On the eve of the competition, the four manufacturers were still touting their aircrafts’ merits.

The Raytheon-Alenia Aermacchi and Lockheed Martin-KAI teams are making their cases for established aircraft, citing prior records, hundreds of thousands of flight-testing hours and an easy transition to what the Air Force needs for the T-X.

Jim Hvizd, Raytheon Space and Airborne Systems vice president of business development, said the T-100 is “a simple block upgrade from the [Alenia Aermacchi-developed] M-346, which is already training fourth and fifth-generation pilots from Israel, Italy, Singapore and Poland.”

“There are very few changes needed to customize our solution for the Air Force mission,” he added. “That means in addition to ensuring affordability and cost certainty, we also aren’t going to face the delays associated with full development programs.”

The T-100 has been flying since June and flight tests continue to progress well, according to Raytheon.

The Lockheed Martin-KAI T-50 was always meant to be a replacement for the T-38, said Mike Griswold, Lockheed director of business development and capture lead. Minor changes in the Air Force requirements led to what became the T-50A design — notably in the larger cockpit display that can switch between F-16 and F-35-style interfaces, he said. “When a student first gets into the T-50A, we don’t want to overwhelm them with a varsity-level F-35 [display], so the displays will get more and more complex.” Flight-testing is currently wrapping up, he said.

Timing is really what the T-50A offer is all about, Griswold said. The aircraft is already fully operational, with over 100,000 flight hours and a supply chain in place in Greenville, South Carolina.

“We’re ready to move out now, and we think we’ll be ready much quicker” than the competitors, he said.

T-50 chief test pilot Mark Ward said at a recent Air Force Association conference that the company continues to perform testing on the aircraft in order to spot-check specific modifications.

“Every bit of testing we do now to gather data, subtracts from what the Air Force will have to pay” later and will shorten the length of post-contract test time, he said.

An off-the-shelf’s potential to shift the IOC timeline to the left might not be so relevant for the T-X because the Air Force has already issued a preliminary schedule timeline that each team’s aircraft must meet to win the award, Jaworowski said.

Boeing recently unveiled its T-X prototype at its St. Louis, Missouri, facility. Ground testing for the Boeing T-X is going “exceptionally well,” and flight tests are expected before the end of 2017, Ted Torgerson, Phantom Works director and T-X program manager at Boeing said in an email.

“We invested our own resources to give the [Air Force] exactly what it asked for, in a new design, without the cost of a Milestone A competition,” he said, adding that in doing so, Boeing “significantly reduced the risk and cost” of the aircraft.

“Off-the-shelf competitors will experience weight issues from day one, created by the modifications they need to make to meet requirements,” he said. Older designs will also be more expensive to maintain in the future, he noted.

The incumbent contractor did not make an executive available for interviews, but T-X program communications lead Katherine Thompson said the company has been in an exclusive teaming with BAE Systems and L-3 on T-X since 2011, with Northrop Grumman serving as the prime program integrator and manufacturer.

BAE Systems is providing embedded training capability and manufacturing support, and L-3 is responsible for ground-based training and simulation.

“It is evident [the Air Force needs] a new aircraft and training system to meet their needs for the next 50 [years],” Thompson said in an email. “They’ve spent the last several years preparing for this necessary acquisition, as have we, and we want to be the team that gives the Air Force what they ask for.”

Despite the cost challenges and changing program requirements, the four competitors need to “aggressively pursue this program,” as there are few other aircraft competitions out there, Aboulafia said.

Based on its current forecast, the Teal Group expects the T-50A to have the best chance of winning the competition, according to its report.

“This looks an awful lot like a heavily cost-driven program,” Aboulafia said. “There’s not a lot to differentiate [the clean-sheet versions] on the basis of cost.”

“But with at least three other players, we can’t assume anything,” he added.