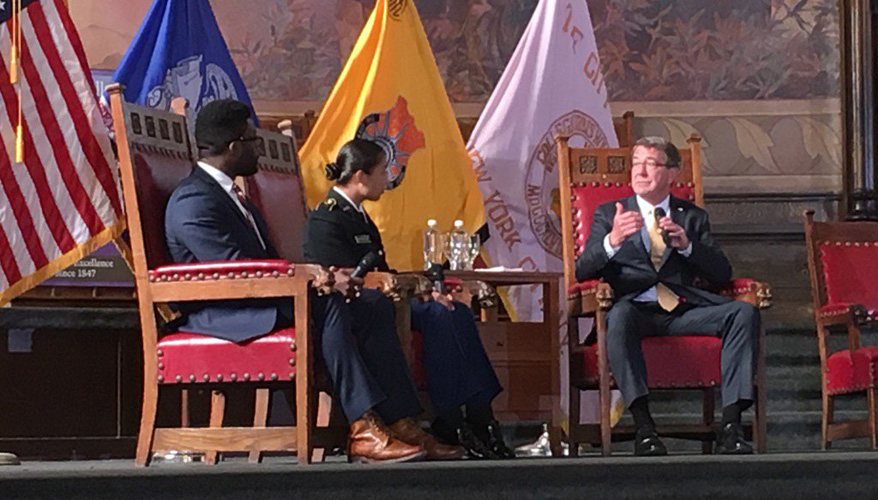 Secretary Ashton Carter is once again taking a page from the corporate playbook as he launches a new effort to expand the Defense Department’s talent base.

Carter is seeking congressional approval to spend $140 million over five years on a branding and messaging campaign that would supplement the military services’ traditional recruiting programs. Like a presidential candidate who wants to expand the electoral map, Carter similarly wants to help the military reach areas of the country where it has been tougher to sign recruits.

The initiative was announced Nov. 1 when Carter spoke to students at the City College of New York, in New York City, an area where the military has underperformed in recruiting.

Carter also wants to bridge cultural divides within the military as most officers come from northern states, while the majority of enlisted troops come from southern states. “Geographically, our military’s recruiting pool is shrinking, with more and more of our people coming from fewer and fewer states,” said Carter. Americans from rural areas are twice more likely to join the military than those from urban areas, and 40 percent of those who join the military come from just six states, he said. Recruiting is most successful in the South, Southwest, and Big Sky Country, and most difficult in the Northeast, said Carter. “That’s paradoxical, since the Northeast is among the regions with the highest percentage of young Americans who have the qualifications we require to serve.”

The branding campaign is the newest piece of the larger “force of the future” personnel reform and talent management effort that Carter launched last year. Previous initiatives focused on promotion reforms, family benefits and other incentives to retain top performers. Even as his administration approaches its final few weeks, Carter believes these are “common sense” measures that the future leadership is likely to carry on.

From day one as defense secretary, Carter has made a big push to reach out to millennials and tech-oriented audiences hoping to interest them in working on defense projects, if not joining the military. As part of the new advertising effort, he will ask the services to review the Reserve Officers’ Training Corps program, or ROTC, based on college campuses around the country. Forty percent of U.S. officers come from ROTC. He would like to see some changes to the program that would reward STEM graduates, for instance, and expand into schools known for technical excellence like MIT and Carnegie Mellon.

It wasn't a coincidence that Carter chose to unveil the new campaign at the City College of New York. CCNY enrolled its first Army ROTC student in 1917 but in 1971, the faculty senate voted to cut ties with the military to protest the Vietnam War, as many other colleges and universities did at the time, Carter noted. ROTC didn’t return until after “Don’t Ask, Don’t Tell” was repealed a few years ago, which allowed gay and lesbian members to serve openly.

In addition to advertising, the branding plan includes the creation of a speakers’ bureau to help orchestrate messaging efforts by top leaders.

In a move that is certain to stir controversy, Carter will recommend that recruiting standards be reviewed in response to societal changes like a larger percentage of overweight teenagers, the growth of single parents and increasing numbers of young people who get tattoos. These issues in recent years have gained attention because the military disqualifies many potential recruits for being overweight, single parents or for having tattoos in visible areas. According to a senior defense official who briefed reporters, the recruiting standards are not being changed in the near future, but will be “looked at systematically and evaluated against our needs.”

The advertising program would get under way in fiscal year 2017 if funding is approved. The senior defense official said key congressional committees have privately indicated they will support it. Congress in the past has pushed back on advertising initiatives but, in this case, the official said, “They understand this is a gap we are trying to fill.” This is not about running up the recruiting numbers, he noted. “We are trying to build awareness in our society so people know about the military and about our mission.”