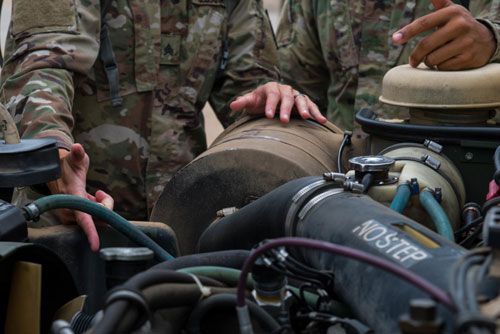 The Defense Department is challenging manufacturers of military equipment to loosen their grip on intellectual property so the military can take over routine maintenance and repair work currently done by contractors.

The issue has ignited a tense controversy as manufacturers fear that the Pentagon’s efforts could upend the lucrative aftermarket services business.

The military services in recent years have been keen on securing “data rights” for equipment they buy from suppliers. The rights to the designs of thousands of pieces of hardware and software used by the armed forces are owned by manufacturers. Defense officials have become increasingly frustrated by IP restrictions because they are obligated to hire the original manufacturer of a system for logistics support and upgrades. With the Pentagon under pressure to cut spending on contractors, changing how the services manage data rights has become a top priority.

“We need to have a conversation with industry,” says Maj. Gen. Bruce T. Crawford, commander of the U.S. Army Communications-Electronics Command.

The battle over IP rights — and how much work the Pentagon can bring in-house in an effort to save money — has intensified in the Army as it faces the worst fiscal crunch of all the military services. The Army’s budget is being squeezed by rising personnel costs, and spending on contractor-provided maintenance over the past several years has crowded out funding for procurement of new equipment.

In the current fiscal climate and under pressure to modernize its aging fleets of vehicles and other weapon systems, Crawford says, the Army is especially hard pressed to negotiate license rights with suppliers. CECOM alone owns hundreds of systems that it acquired over 15 years of war and now need upgrades and repairs — and the warranties have run out. The Army wants to take over the refurbishment of many systems but needs the rights to the technical data, Crawford says.

“We are likely not going to be able to continue to do business as usual,” he tells National Defense. “What can be done so that we don’t continue to buy equipment and four or five years later when the warranties are out, we are faced with renewing warranties at a higher cost?”

The Army wants to have soldiers take over more maintenance duties in the field, he says. That means they have to be able to tear down and rebuild systems without the government being exposed to lawsuits by manufacturers or having to pay for contractor-provided services. “We appreciate the innovation that industry provides,” Crawford says. “At the same time, there’s a lot of things we have to get soldiers back to doing.”

To use a medical analogy, “We need industry to do the open heart surgery and brain surgery. Right now because of 15 years of continuing combat, we have industry checking blood pressure,” says Crawford. “We want to put the sergeant and the warrant officer back in the business of doing what we consider to be soldier tasks.”

Change will take time and will not be easy, he says. “It took us 15 years to get where we are.”

Shifting work from contractors to soldiers became a necessity when the Army launched a massive effort to upgrade the information-technology infrastructure at dozens of installations nationwide. It had to complete nearly 2,000 modernization projects at Army posts in about two years, and the budget was tight, says Maj. Gen. John W. Baker, commander of the Army Network Enterprise Technology Command. “We used our own soldiers to install equipment,” Baker says at a news conference at the Association of the U.S. Army annual conference. “It’s helping us save money and modernize at a much more rapid pace.”

Crawford says the Army’s dependence on contractors always will be significant but is probably too high today. One reason is that military systems have become increasingly software-heavy, and the Army is short on talent in that area. “Right now the workforce for development and sustainment of our software is 85 percent contracted. Is that a good number? How do we know?” he asks. “What skills do we need to be government-owned and government-led? I’m not sure 85 percent is a good number.”

"Right now the workforce for development and sustainment of our software is 85 percent contracted."

Establishing new policies and agreements on technical data rights is “one of the toughest challenges we'll have in the next three to five years,” he says. Over the past decade, “We bought a lot of commercial off-the-shelf systems, with warranties. How are we going to conduct maintenance without tech data rights? We're at the point where we have to have a conversation.”

Other Army leaders who spoke at the AUSA conference last week made similar arguments. Army Materiel Command chief Gen. Gustave Perna calls it an imperative to have soldiers during deployments in charge of maintaining combat equipment and cut back on contractor support. He and other military leaders contend that the services have to be able to modernize weapon systems in military depots but are undermined by a cumbersome IP rights bureaucracy.

Katrina McFarland, the Army’s senior procurement executive, believes the government and industry should be able to reach a “win-win” compromise where the Army can acquire rights to the “technical baseline” of a piece of equipment and still allow the manufacturers to profit from their investment in the technology.

The issue of IP rights has been so contentious that is has sparked a flurry of legislation and criticism that the Pentagon is not taking into account the business realities of the defense and tech sectors, which invest billions of dollars in new technology and need to be able to profit from it. Weapons manufacturers often bid lowball prices on systems on the assumption that they will be able to recoup their losses in future contracts for lifetime support of the system. The Defense Department has been unhappy about having to defer to contractors on many equipment-related decisions because the manufacturers own the rights to the design. Industry insiders say the Pentagon’s efforts to upend the traditional ways of doing business could be financially disastrous to some companies.

Congressional leaders have knocked the Pentagon’s approach to acquiring private-sector IP as a deterrent to innovation, as companies that develop cutting-edge software, for instance, might be reluctant to work on defense projects if their intellectual property becomes fully or partially government owned.

Because of the heated disagreements and continued legal disputes on this matter, Congress commissioned a panel of government and industry executives to review the existing body of laws and regulations regarding rights in technical data, an arcane and complex issue even for industry and contracting attorneys. The 16-member panel, led by former Pentagon acquisition official Richard Ginman, was directed to examine the entire spectrum of technical data rights law — U.S. Code Title 10, sections 2320 and 2321 — that serves as the legal basis for deciding whether the Pentagon is entitled to technical rights to products that it is buying for military use.

The group is scheduled to submit recommendations this fall. During panel meetings over the summer, Ginman has argued that many of the IP-related disputes could be avoided if the government stated upfront what rights it needs before contracts are signed. That would give manufacturers peace of mind by knowing exactly how the government intends to us the IP. Companies are especially leery of “blanket requirements” for data out of concern that they may lose commercial rights to modify the product or sell it to other customers.

Contractors also worry that the issue has created an adversarial finger-pointing climate where government officials suggest that companies of putting profit ahead of national security. Executives bristle at these suggestions but recognize they have to balance their duty as military contractors against their obligations to protect their shareholders’ interests.

“We have the mission to defend the nation,” says Army acquisition official Roger Hamerlinck, one of the panel members. “Congress didn’t put that mission on you guys,” he tells the panel’s industry representatives. “We have to work together to defend the nation. That’s why we come to you to buy equipment and supplies.”