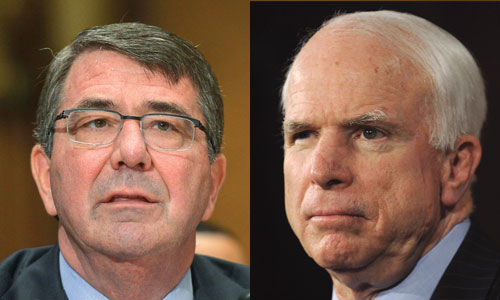 The swipes are all too familiar to Pentagon watchers and oversight committees on Capitol Hill. The Defense Department is riddled with inefficiency and bureaucracy. Redundant layers of management obstruct decision making. The chain of command is top heavy and not up to the challenges of an increasingly dangerous world.

The chatter around town these days is whether Congress believes these are serious enough issues that will merit legislative action this year.

The initiative on so-called “defense reform” has been seized by the Senate Armed Services Committee, which held 11 hearings last year that sought to shed light on how the Pentagon operates and to make a point that the nation’s massive military apparatus is badly in need of a shakeup.

Falling under the umbrella of defense reform are broad initiatives such as changes to personnel policies, an overhaul of the Pentagon’s weapons acquisition process and downsizing Pentagon bureaucracies. The SASC specifically is looking at a sweeping reorganization of the defense establishment that would require a rewrite of the 1986 Goldwater-Nichols Act that created today’s command structure.

There are expectations that SASC Chairman Sen. John McCain, R-Ariz., will wield his influence as one of Congress’ most credible defense experts to reshape the Pentagon and the military’s unified commands. McCain considers defense reform and the possible revision of Goldwater-Nichols pressing issues for the coming legislative year, said committee spokesman Dustin Walker.

“Chairman McCain has said from the beginning that this oversight initiative is not a set of solutions in search of problems,” Walker said in a statement. “The committee is focused on precisely defining the problems at the Department of Defense, many of which have been described at length in recent expert testimony.”

The first step could be what some insiders call a “Goldwater-Nichols for the back office” that McCain would introduce in next year’s defense authorization bill. That could entail proposals for a sweeping reorganization of joint commands, and staff cuts in administrative and overhead functions.

As the legislative process begins to gather steam toward the Fiscal Year 2017 National Defense Authorization Act, Walker said, “We will work in a bipartisan fashion to use insights from this series of hearings to shape legislation that can provide more efficient defense management, strengthen the all-volunteer force, reform the defense acquisition system, improve the development of defense strategy, and increase the effectiveness of military operations.”

Action to reverse some of the tenets of Goldwater-Nichols already took place in last year’s NDAA, which directs the secretary of defense to return weapons procurement authorities to the individual services. The measure reflects the widespread belief on Capitol Hill that the Pentagon’s procurement process for new weapon systems is out of step with the needs of the force. The 2016 NDAA also requires the defense secretary to report by March on planned reductions to major headquarters activities.

The 30-year-old Goldwater-Nichols Act has been in McCain’s crosshairs for years. The legislation was conceived at a time when the military services were under fire for their insularity and difficulties working as a joint force. It defines the roles and responsibilities of the secretary of defense, the chairman of the Joint Chiefs of Staff, the service secretaries and chiefs, and the combatant commanders. Of concern to McCain is that the law fueled the growth of the Defense Department’s “back office” as the Pentagon added many new organizations and agencies, including a vast expansion of the office of the Joint Chiefs of Staff and the office of the secretary of defense. The massive bureaucracies, McCain has said, are draining the Pentagon financially while also impairing leaders’ ability to think creatively and adapt to changing threats.

“The poor quality of the DoD's strategic planning documents may suggest a deeper, more troubling problem, that despite Goldwater-Nichols reforms, or in some cases, perhaps unintentionally because of them, the development of policy, strategy and plans in the DoD has become paralyzed by an obsessive pursuit of concurrence or consensus,” McCain said last month.

“The main problem that Goldwater-Nichols sought to address 30 years ago was primarily an operational one, the inability of the military services to operate as one joint force. … The problem today, however, seems to rest far more at the level of strategy,” said McCain. In the face of new threats like the Islamic State in Iraq and Syria, and surging crises related to Iran, North Korea, China and Russia, the Pentagon appears “incapable of adapting and innovating with speeds sufficient to maintain the initiative and keep us a step ahead of our adversaries.”

One of the sclerotic effects of bureaucracy has been the Pentagon’s troubled process for drawing up plans and strategies, said former Undersecretary of Defense for Policy Michele Flournoy. Defense reforms are a “very target-rich environment,” she told SASC during a hearing last month. Because the decision making is spread over so many large organizations and chains of command, the usual practice is to “water down solutions to the lowest common denominator,” she said. “This over-emphasis on jointness in policy actually undermines the department's ability to respond quickly and effectively and strategically to some of the challenges we face.

In areas like intelligence, policy, logistics and others, said Flournoy, “There is a lot of duplication and a lot of confusion about who has what role and what responsibility.”

The joint staff and the office of the chairman have grown to nearly 4,000 people, or 10 times what it was five decades ago. The staff should be smaller and more focused on providing advice to the president, said Flournoy.

The unified “combatant commands,” or COCOM staffs, similarly have ballooned to more than 38,000 people, she said. “I think they, too, are ripe for a real scrub, in terms of the breadth of their functions and the level of duplication with the joint staff and with OSD.”

Bloated headquarters “undermine both performance and agility,” Flournoy added. In recent years, headquarters have continued to grow even as the active duty force has shrunk. The office of the secretary of defense alone has more than 5,000 people.

Including the defense agencies, there are 240,000 non-combat personnel, excluding contractors, who consume $113 billion, or almost 20 percent of the DoD budget. The large overhead expenses drain resources that could be spent on combat forces’ readiness and modernization, she said.

A similar take was offered by Michael Vickers, former undersecretary of defense for intelligence. “In my view, defense reform today needs to address two critical problems. One is managerial: how to reverse the steady decline in combat power that stems from rising personnel and weapons cost and excessive overhead. And the other strategic: how to get better strategy and therefore more effective military operations.”

The Defense Department, meanwhile, “plods along.” The president and the secretary of defense are “ill-served,” Flynn said. “In a giant organization like the Department of Defense, change is not easy. Reforms will take time.”

Flynn suggested that Congress’ best tool to compel reform is to cut the department’s budget. “At the end of the day, still the budget process and not the mission is what truly changes anything in our government. Where the money goes, things happen. And despite where that money goes, most times it has no bearing on our ability to win wars.”

Civilian staff growth at agencies like DLA “has just been unbelievable,” he told lawmakers. “Turn those dollars into readiness and place more tooth into our war fighting forces.”

There are no early signals yet from Defense Secretary Ashton Carter on whether he favors an overhaul of Goldwater-Nichols. A senior defense official said Carter is open to ideas to make the Pentagon run more efficiently. “I think we should look at ourselves, there’s always room to improve,” the official told National Defense. “The secretary wants us to do that.”

Business reforms in many shapes and flavors have been proposed by every defense secretary during the Obama administration to little effect.Many proposals were put forth in isolation and lacked congressional support. Some experts have cautioned against change for the sake of change, and have called for further studies.

Time Is Right to Clean Up Defense Acquisition