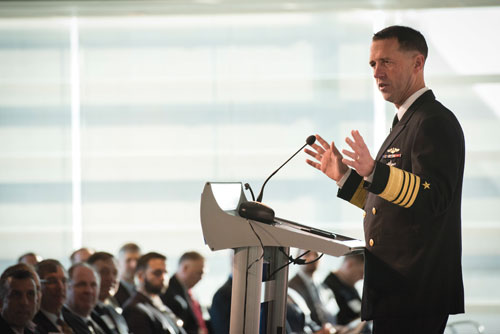 Chief of Naval Operations Adm. John Richardson
The U.S. Navy is juggling many missions around the globe. It is challenging the Islamic State in the Middle East and is increasing its presence in the Asia-Pacific region as China continues to intimidate its neighbors. At the same time, other nations — such as Iran and North Korea — remain concerns.

To maintain its global dominance, Navy leadership released in January a strategy called, “A Design for Maintaining Maritime Superiority,” that is intended to guide the sea service as the world grows more complex, said Chief of Naval Operations Adm. John Richardson.

“The character of the entire game has changed,” he said during a speech in January. “In particular, the pace of things has become so accelerated. … If we do not respond to those changes, if we do not recognize and adapt to the changing character of the game, we are a Navy that is at risk of falling behind … our competitors.”

While the world was once more black and white with only two superpowers — the United States and the Soviet Union — it now faces a more congested playing field, he said.
Competitors include Russia, China, North Korea, Iran and terrorist organizations.

“For the first time in what I would say is roughly 25 years, the United States is back to an era of great power competition,” he said. “When I was deployed in 1983 … it was a different world. When the Soviet Union dissolved, the Cold War ended, we really entered a period where we were not … challenged at sea, not in a very meaningful way. That era is over.”

As outlined in the Navy’s new strategy, some of these actors are seeking to exploit what Richardson calls the three global forces: traffic in the ocean, the global information system and the increasing rate of innovation.

“I’m focusing on three forces that for the Navy are sort of defining our way forward. The three forces that are causing our world to be more used, more trafficked, more stressed, more important and perhaps, most interestingly, more competed than ever,” he said.

The maritime domain looks physically the same, but it is becoming more crowded. Since 1992, maritime traffic has increased by a factor of four. Technology is making previously unreachable parts of the ocean floor accessible. That is opening up certain areas to mineral, oil and gas exploration, he said.

There are also rapid advancements in technology, such as material science, robotics and artificial intelligence. “It is coming at us faster and faster and they are being adopted by society just as fast,” he said.

Potential adversaries are exploiting all three of these forces, he said. To respond, the Navy has identified four lines of effort — “warfighting, learning faster, strengthening our Navy team and building partnerships,” according to the strategy.

The effort includes maintaining and modernizing the undersea leg of the nuclear triad, it said.

Additionally, the Navy must develop concepts and capabilities to “provide more options to national leaders, from non-conflict competition to high-end combat at sea,” it said.

“Operations short of conflict should be designed to contain and control escalation on terms favorable to the United States. Combat at sea must address ‘blue-water’ scenarios far from land and power projection ashore in a highly ‘informationalized’ and contested environment,” the strategy said.

These concepts would be validated through wargaming, fleet exercises, unit training, certification, and modeling and simulations.

The service must also “advance and ingrain information warfare” as well as explore alternative fleet designs “including kinetic and non-kinetic payloads, and both manned and unmanned systems,” the strategy said.

The document also called for an organizational examination of U.S. Fleet Forces Command, Commander of Pacific Fleet and subordinate commands to “better support clearly defining operational and warfighting demands and then to generate ready forces to meet those demands.”

The strategy comes on the heels of a December memo by Secretary of Defense Ash Carter where he criticized the Navy for over-prioritizing fleet size and neglecting capability.

“The Navy has overemphasized resources used to incrementally increase total ship numbers at the expense of critically-needed investments in areas where our adversaries are not standing still, such as strike, ship survivability, electronic warfare and other capabilities,” the memo addressed to Secretary of the Navy Ray Mabus said. “This has resulted in unacceptable reductions to the weapons, aircraft and other advanced capabilities that are necessary to defeat and deter advanced adversaries.”

The Navy’s latest program submission — which exceeds the service’s 308-ship requirement — is “unbalanced” and creates too much warfighting and technical risk, he said.

In the memo, Carter announced that he would slash the number of littoral combat ship purchases from 52 to 40. “This plan reduces, somewhat, the number of LCS available for presence operations, but that need will be met by higher-end ships, and it will ensure that the warfighting forces in our submarine, surface and aviation fleets have the necessary capabilities and posture to defeat even our most advanced potential adversaries,” he said.

During a December speech at a defense forum hosted by the U.S. Naval Institute prior to the release of the memo, Sen. John McCain, R-Ariz., chairman of the Senate Armed Services Committee, said the United States “is confronting the most diverse and complex array of global crises since the end of World War II,” but at the same time does not have enough resources to meet the increased demand.

“Now more than ever a strong Navy is central to our nation’s ability to deter adversaries, assure allies and defend our national interest,” he said. “And yet, by any measure, today’s fleet … is too small to address these critical security challenges. The Navy’s requirement is 308 ships. The Bipartisan National Defense Panel calls for a fleet of 323 to 346 ships and our combat commanders say they require 450 ships.”

While current vessels are more capable than their predecessors, more are still needed, he said. “The size of our fleet translates directly to presence, which is essential to protecting shipping lanes, responding to crises and deterring aggression. And we cannot be present with the ships we don’t have.”

The military must be willing to reimagine the Navy, he said. He noted that six months after the attacks at Pearl Harbor, the U.S. Navy had a major victory at Midway, which was a turning point in the war in the Pacific.

“That victory was not the work of six months, but of many years before the war began. The U.S. Navy in the 1930s adapted itself — despite fervent opposition at times both internally and externally — from an organization built around the battleship to one organized around carrier aviation,” he said.

The government must reconsider whether or not naval forces are postured for success, he said. Additionally, leadership must take a hard look at studies that suggest adding forward bases or stationing more forces in the Western Pacific, such as a second aircraft carrier or an amphibious ready group.

The Navy and Marine Corps currently maintain two maritime hubs, one in the Pacific and one in the Middle East, McCain said. The United States should consider establishing one in Europe because of recent aggressive behavior by Russia, he said.

“Given Russia’s behavior in the past three years, a third hub, centered on an aircraft carrier strike group, may now be necessary in the Mediterranean to protect U.S. and allied interests while enabling prompt response options,” he said.

Additionally, there must be a greater focus on technological innovation, McCain said. “We have to face the reality that America’s military technological advantage is eroding and eroding fast. Assumptions we have made about the battlefield, such as having unfettered access to the sea and sky, have led to operational and programmatic decisions which are no longer appropriate for the global security environment [in] which we find ourselves,” he said.

Richardson said the sea service is tackling the innovation issue. He called for the Navy to “fast track” technologies to help it maintain an edge over adversaries.

“In many ways our most challenging competitors are very close, in terms of capability, to us. We’ve got to be very mindful of that, be cleared eyed about that,” he said. “We’ve got to spend some time recapturing the momentum, and picking up the pace and moving faster.”

The Navy wants to create an acquisition “HOV lane” where certain mature technologies can be fast tracked.

He would also facilitate more experimentation on ships. “The amount of creativity that is out there in the fleet is tremendous,” he said. “The real magic happens when you put … developers [on ships] and they meet with sailors out there and they watch their ideas come to life,” he added.

It is more important to begin working on innovation immediately but deliberately, rather than trying to guess what might be needed decades from now, Richardson said.

“Many observers starting in late 2013 have concluded that we have undergone a shift in strategic eras, from the familiar post-Cold War Era of the last 20 or 25 years, to a new and different strategic era, entering renewed great power competition and challenges to key elements of the U.S.-led international order that has operated since World War II,” he said.

This strategic shift has been difficult for some to recognize, he said during the forum. For example, the markers of it are less abrupt than the ones that heralded in the shift from the Cold War to the post-Cold War era. Additionally, this shift is “less pleasant than the one that Americans were presented with at the end of the Cold War,” in which they won the war. In this case it is harder to accept, he said.

This new era has yet to be named, O’Rourke said. That could be damaging because it makes it harder for citizens to recognize and subsequently adapt to the changes.