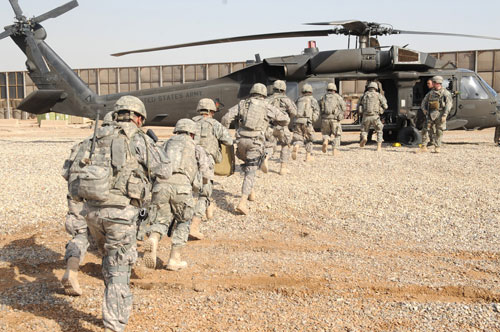 The National Commission on the Future of the Army’s report to Congress released Jan. 28 took note of the service’s acquisition woes and said they were a “significant long-term-concern.”

The service has “appropriately” chosen readiness over modernizing its equipment, the report’s authors wrote. But that comes at a price.

“The commission considers the limited investment in modernization as a source of significant long-term concern, a concern that would surface even had the less-challenging security conditions assumed in the current defense strategy held,” the eight-member panel wrote.

It singled out shortfalls in aviation survivability; short-range air defense; artillery; chemical, biological, radiological and nuclear protection; field artillery; and watercraft. It recommended the Army “reassess the risk it is assuming” in these fields. The need to modernize equipment in these categories could affect troops in the Americas, Europe and the Korean Peninsula, the report said, but it left details for the classified portion of the report.

“In light of the current security environment and budget constraints, the commission judged the Army’s approach of prioritizing readiness and capacity understandable, although its consequences for modernization are regrettable,” the report said.

While the panel did not share any recommendations for overhauling the Army’s acquisition processes, it did note the long list of failed programs that cost taxpayers billions of dollars and did not result in better capabilities for soldiers. It has canceled the ground combat vehicle, armed aerial scout and unmanned ground vehicle upgrades. “Compounding the problem, modernization plans for mounted soldier system programs, aviation, communications, and ground combat vehicles remain vulnerable to further reductions,” the report stated.

The lack of investment in these fields would create risks to the industrial base, it said. “Continued fiscal uncertainty and low resource availability for Army investment will also dissuade new entrants to the defense marketplace,” it added.

Daniel Goure, vice president of the Lexington Institute, an Arlington, Virginia-based think tank, said: “The Army has no major modernization programs. Sit on that for a moment. You have a sucking chest wound, and the commission focused on a bunch of paper cuts to the fingers. There is no clear, evident future of the Army in modernization terms.”

The only major modernization program that comes to mind is joint multi-role helicopter modernization, which is a vague program way out in the future and there just “to keep some industry people hopping along,” he said.

The Army needs better counter-rocket, precision-guided artillery, mortar systems, active protection systems for vehicles and ways to fly through brownout conditions in helicopters, he said. These are incremental improvements that do cost a lot of money, but are relatively close to being fielded, he added.

Beyond these short-term technologies, the Army “doesn’t have a clue as to what it is doing in the future,” Goure said. The report was a once in a generation chance to address fundamental problems in the service and to set it on a modernization, force structure and budgetary path to the future, but “they punted,” Goure said.

“I think they missed all the marks. Maybe because it had to be a consensus document. Maybe because there are politics with these things,” he added. “I almost feel like this is what they could agree on — watercraft.”

The top modernization priorities that the report should have addressed are aviation, force protection and networking, which includes cyber operations. Very little of the unclassified report addressed cyber issues, he noted. Maybe there is more in the classified version, he speculated.

Congress created the commission one year ago to look at a variety of issues facing the Army.

The commissioners took the service to task for not maintaining its fleet of tactical wheeled vehicles.

“Commissioners received numerous reports from soldiers and commanders about tactical wheeled vehicle shortages. These shortages are most pronounced in heavy equipment prime movers,” the report said, describing the problem as “alarming.” It recommended that the service report back to Congress within one year with a plan to close the readiness gap in tactical mobility.