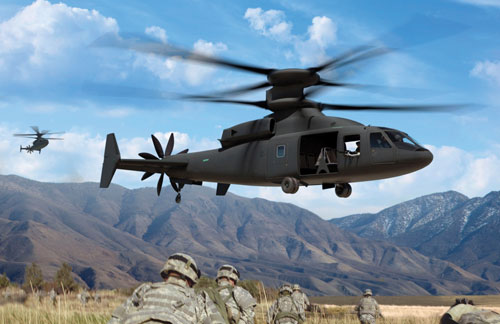 The Defense Department’s program to develop the next generation of rotary wing aircraft will do away with categories based on weight and will instead break them down into capabilities, a senior leader in the program said Jan. 21.

Jose Gonzalez, deputy director of land warfare, munitions and tactical warfare systems under acquisition, technology and logistics at the office of the secretary of defense, said the future vertical lift program is moving at a deliberate pace, which he knows frustrates helicopter manufacturers.

“But this is a flying helicopter that has to be certified — has to be more capable. We’ve got a lot of experience with helicopters. They are not easy. The V-22 was not easy. CH-53K is proving to be hard. Things that fly that have so many moving, shaking pieces are complex, so they take time,” he said.

Gonzalez, who also serves as co-chair of the future vertical lift program’s executive steering group, spelled out the process in a speech at the National Defense Industrial Association’s Special Operations/Low Intensity Conflict conference in Washington, D.C., but couldn’t say much about requirements because they were still being formed.

The trend now is to break the aircraft down into “capability sets,” he said. Helicopters are now categorized by weight as light, medium, heavy and ultra-heavy. There are new categories that are going to be rolled out soon. Gonzalez listed reconnaissance, close-air support, direct attack, marine interdiction, medical evacuation and urban assault and security as some of these new capabilities.

“We had that construct going on for a long time and that often didn’t sit well. Weight was just not a good discriminator,” he said.

There will be four or five capability sets, he said. Capability set 1, for example, might encompass reconnaissance, close-air attack and direct attack.

The requirements for these capability sets are not yet formed but it is a methodical, deliberative process, he said. “We’ve got lieutenant colonels, colonels and majors fighting every day to develop that set of requirements that is then going to go into the process,” he added.

The 12-member steering committee Gonzalez co-chairs includes representatives of the four services, plus Special Operations Command and the Coast Guard. “It’s a small group of flag officers and myself and a joint staff counterpart who help steer the future vertical lift initiative,” he said.

Once the capability sets are decided upon, it will be up to the services as to which ones they want to pursue first. “We should be seeing a material development decision for an Army-led future vertical lift program, leveraging the joint multi-role program, very soon,” he said.

While the Army will likely lead the first program, Gonzalez said, “We are really trying to do this in a joint manner.” There are six elements to the future vertical lift strategic plan, and one is “joint requirements,” he said.

“We want to ensure early on that requirements we develop for future vertical lift are looked at in a joint manner … There will be compromise. We’re going to have to make trades in order to build something that is executable,” Gonzalez said.

He encouraged businesses large and small to join the Future Vertical Lift Consortium, a joint industry government group. “It really gives me a mechanism to have an open dialogue. … On a daily basis I’m able to have a very frank and open discussion with my industrial partners,” he said. He can share his challenges and understand what vendors have to offer and what kind of investments they are making.

“We want to get you farther than your nose under the tent. We actually invite you into the tent and you’re now part of our group,” he said.

This deliberative approach will not result in new aircraft until the 2030 to 2040 timeframe, he said. “It’s not anytime soon.”

“We have been working on this for a very, very long time. We have known that we have needed to do something. We have some very capable aircraft out there ... but we know we need to start investing in new capabilities now, or we’ll never have anything better than what we have today,” Gonzalez said.