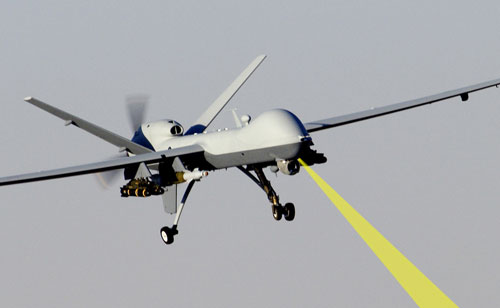 Illustrated concept of an MQ-9 Reaper with a laser

Years after the Air Force’s airborne laser ballistic missile defense program was canceled because of survivability and cost concerns, researchers are embarking on a new path to mount a laser weapon on an unmanned aerial vehicle, the head of the Missile Defense Agency said Jan. 19.

“The investments that we’re making are in the early stages of [determining] how do you get there?” Vice Adm. J.D. Syring, director of the Missile Defense Agency, said at a Center for Strategic and International Studies speech. There is “important work going on at the laboratories and universities and industry down this path, and we have significantly ramped up our program in terms of investment and talking about ... what else needs to be done to mature this capability.”

The now defunct ABL was a chemical laser attached to a manned 747 aircraft, which was intended to fly near potential launch points and take out adversary missiles during their “boost phase.”

“It proved that this concept … could work,” Syring said, while noting that the program had difficulties and drawbacks. “It was complex. It was hard to maintain … and go through that refuel process. And we also proved that altitudes at [35,000] or 40,000 feet was problematic” for laser stability.

Although the Pentagon is working on directed energy technology, the capabilities of current military laser systems aren’t up to snuff, Syring said. A new system needs to be able to direct a laser beam at “much longer ranges and much higher power” than what is available today, he said. “It obviously needs stand-off range because this platform theoretically would not be protected” from enemy forces.

The high-powered system also needs to be able to fit on a small aircraft such as a UAV that could fly at 65,000 feet and stay aloft for days or weeks at a time, Syring said. The laser also needs to have a deep magazine and a rapid retargeting capability.

“To be able to field a package at those power levels and at a low size, weight and power form — the technical challenge is significant,” he noted.

There are “many, many, many challenges here,” he said. “That doesn’t mean that we’re declaring it hopeless. The investments that we’re making are in the early stages of 'how do you get there?' and 'when will you have enough information with power, scaling, and size, weight and power [progressing] down to field a credible solution?'”

Syring hopes the Defense Department will have a better sense of the technology's potential in the coming years. “What I’m trying to do is competitively drive towards a decision in 2019 with all these efforts progressing on … is it feasible to scale this up to a platform? And I think we’ll know a lot by the 2019 timeframe,” he said.

“The challenge is can you do … lethal boost phase intercept or not. And to me this is an important progression on how we get there,” he said.

Military Use of Unmanned Aircraft Undeterred by Drone Backlash