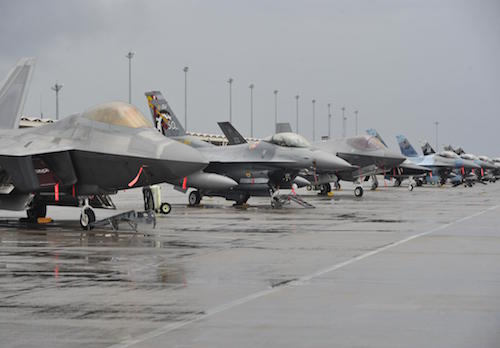 An F-22 Raptor, a T-38 Talon, F-16 Fighting Falcons and an F-35 Lightning II sit on the flight line at Tyndall Air Force Base

As if producing cutting-edge warplanes weren’t hard enough, what comes next — maintenance and logistics support — can be an even more daunting challenge.

The F-35 joint strike fighter certainly will present this test to the Pentagon as manufacturing of the U.S. military’s newest combat jet ramps up from a few dozen to more than a hundred per year. The fleet is projected to grow from 154 today to more than 1,000 fighters in the next four years. And even if the Defense Department and manufacturer Lockheed Martin manage to fix all the development glitches that still dog the airplane, there are worries about the government and the industry’s capacity to keep the fleet in working order after F-35 squadrons around the world start operating the planes.

The F-35 program executive officer, Air Force Lt. Gen. Christopher Bogdan, has sounded alarms in recent months about the coming logistics crunch. The plan is to triple the production and fielding rate in just three years, from about three to four dozen airplanes a year to more than 120. Bogan said the accelerated delivery gives him “some pause” and fears there could be a shortage of suppliers that can fill the spike in demand for spare parts and of skilled technicians to repair the technologically advanced airplanes. “What I most worry about, and what we most have to concentrate on, is the supply base,” Bogdan said last fall.

Before he left his post as the Air Force’s top acquisitions executive, William LaPlante warned about a potential crisis if the military begins to deploy the aircraft without adequate resources for global sustainment, maintenance and training. “That scaling is the challenge,” he said in November.

Lockheed Martin spokeswoman Laurie Tortorello said the company is prepared to deal with the support needs of a larger fleet. "We are very aware of how the ramp-up in F-35 production is going to rapidly increase the number of aircraft in the field to sustain," she told National Defense. "We have been planning for years and we are working hard every day to ensure we are prepared and avoid any potential issues when the airplanes arrive. This includes working with all aspects of production, engineering, supply chain, sustainment and field operations."

The logistics issues associated with the introduction of a new fleet of aircraft are nothing new for the Pentagon. These are problems that the Defense Department typically encounters when it begins fielding a brand-new system, said retired Air Force Lt. Gen. Charles “CR” Davis, who served as the service’s top military adviser on weapons acquisitions.

“Most of our airframe companies are focused on production and design,” he said. “That’s their forte and that’s where they make their money.”

Sustainment of a new fleet can be the “hardest thing,” Davis said. “We saw it in the F-22 fighter and the B-2 bomber programs.” In almost “every major airplane I’ve been associated with, when you get the airplane through production, you have a production line that was marching along, and you have airplanes that accumulate in the field. The one thing that is always a problem is spare parts and reliability.”

With a brand-new fleet, there are always difficulties with spare parts and repairs because some airplanes are still getting last-minute updates as they come off the assembly line. “It’s repair procedures, modifications that have to be done as a result of changes in the production line along the way,” Davis said. “The F-35 is very much geared to a production environment, airplanes are doing well coming off the production line. But getting spares through the system, repairs, ensuring reliability curves match the projection, that is, no kidding, the most challenging part of a program once you get into a steady state or continuing production environment.”

It is no surprise that “everyone is concerned about sustainment,” he said. “The cost per flying hour of the airplane, spare parts, reliability is something that everyone worries about when you get to this state of the program.”

With the primary focus on development and production, the logistics support demands often are underestimated. “Once you get an airplane out in the field, you spend a lot more time talking to your maintenance group commanders, supply and inventory control folks,” Davis said. “You spend a lot more time with them working on major issues than you spend with the operational community or on things related to the performance of the airplane.”

In anticipation of growing maintenance work and tighter budgets, the Pentagon is looking at new approaches to contract services from the private sector, said retired Air Force Maj. Gen. David Gillett, vice president of government and defense programs at AAR Corp. and a former commander of the Air Logistics Center at Tinker Air Force Base, Oklahoma.

The Pentagon is pushing the military branches to adopt commercial contracting methods. The military mostly prefers traditional contracts where the government pays suppliers for services and spare parts. Commercial companies like airlines tend to use performance-based arrangements that pay for achieving preset goals such as fleet reliability. “They are beginning to experiment with performance based contracting,” Gillett said. “Performance-based [logistics] contracting is not a new concept. But the Air Force and the other services to date haven’t moved forward very quickly to implement PBL arrangements with industry.”

The Defense Department also has to learn how to negotiate the data rights to spare part designs with aircraft and engine manufacturers so it is not entirely dependent on one company and can compete the aftermarket work, said Gillett.

“It’s more challenging to support systems when the government doesn’t buy the appropriate data to conduct competitions,” he said. The Air Force learned that lesson when it sought to compete the maintenance and repair of the F117 engine for the C-17 cargo aircraft, he said. The engine manufacturer, Pratt & Whitney, owns the technical data, and the Air Force has not been able to compete repair contracts. “The only alternative to get away from the OEM [original equipment manufacturer] is to pursue reengineering solutions and develop the data in-house,” said Gillett. In the commercial world, suppliers that specialize in design engineering develop alternative parts for aircraft engines. But that model is hard to replicate in the military market because parts are bought in small numbers, making it harder for the company to recoup the investment. “The options for the Department of Defense are limited. If they don’t buy the right data upfront they are very hindered.”

In new platforms like the F-35 and the Boeing-made KC-46 aerial refueling tanker, the government has agreements to secure access to technical design data. “They have learned the lessons of the past,” Gillett said. “They now have significant data rights. There is probably some friction between Boeing and the Air Force on what exactly those data rights mean. But there are written agreements.”

In the tanker program, for instance, the Air Force is shifting to more commercial logistics practices. “They are looking at a broader base of suppliers for the support of the engine of the KC-46,” he said. ‘The Air Force is qualifying more suppliers. They have made some steps in that direction.”

Five Takeaways From the 2017 Defense Budget