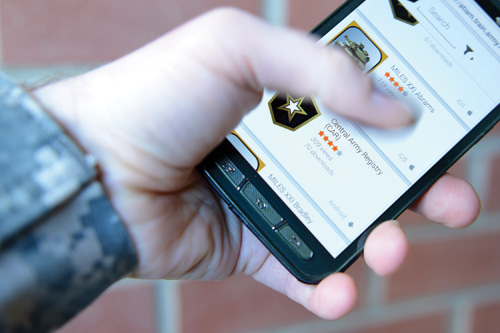 This fall, U.S. Army Training and Doctrine Command presented its own app store where soldiers could find a wide range of documents and training materials easily and securely, said command officials.


“The Army had aspirations to find a location … where soldiers and Department of the Army civilians could find doctrinally sound mobile applications and living doctrine,” said Lt. Col. Joseph Harris, TRADOC capability manager for mobile learning, also known as TCM-M.
A doctrinally sound application is one that has been properly vetted by a schoolhouse or a responsible party, he said.

Additionally, the apps are “free of malicious code or intent. It’s not going to harm” a user’s device or network.

The app — which is known as the TRADOC Application Gateway (TAG) — is available on Apple, Android and Windows devices, he added. Soldiers can access the app by using their Army knowledge online login name and password, or their common access card. There are plans to make the app available to the public sometime in the next year, Harris said.

By downloading TAG, users are able to access other apps within it. There are currently 115 apps, but there are plans for 150 by January, said Ray Shinol, chief technical integrator for TRADOC capability manager-Army Training Information Systems.

Harris said: “We’re building more and more apps every day. … We want to be that one stop shop for soldiers.”

TRADOC wants soldiers and individual commands to submit their own apps. The process for vetting one, depending on the complexity, can take a few weeks to a year, said Matt MacLaughlin, senior mobile instructional design specialist for TCM-M.

“The way that our process works is if a soldier out on the field has created a mobile application … [he would submit it] to us through an email account and then we would run it through the due diligence to make sure that it was vetted and validated before it was released,” he said. “If everything works out well, then that one can go out and be approved by us.”

In late fiscal year 2016, TRADOC will begin sending teams out to commands and bases to train small groups of personnel, most likely Department of the Army civilians, on the basics of mobile app development, Harris said.