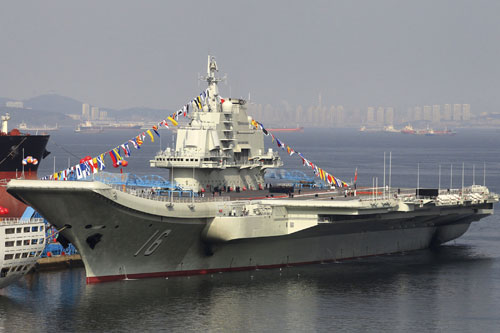 The Liaoning aircraft carrier
The Chinese navy, after running a series of arrested landing tests on its only aircraft carrier, is preparing to deploy it with an air wing aboard. In addition, up to two more flattops are under construction, the media has reported.

The carriers are part of a master plan to transform the nation from a “continental power” to a “maritime power,” experts at a recent Heritage Foundation discussion said.

“China is more engaged in blue waters and will be more so as time goes on,” said retired Adm. James Fallon, former Navy vice chief of operations and commander of U.S. Pacific Command.

China purchased an unfinished carrier from Ukraine in 1998 and — after many years of construction and outfitting the aircraft — commissioned it as the Liaoning in 2012. After sailing it and conducting a series of flight tests, it may go operational with a wing of Shenyang J-15 Flying Shark fighters as early as this year, according to Ronald O’Rourke, specialist in naval affairs at the Congressional Research Service.

The Liaoning is conventionally powered with a full-load displacement of 60,000 tons, and may accommodate a mix of 30 to 36 fixed- and rotary-wing aircraft, O’Rourke wrote in a November report, “China Naval Modernization: Implications for U.S. Navy Capabilities.”

There are many key differences between the Liaoning and its U.S. Nimitz-class counterparts. For one, it is not nuclear powered. And its aircraft, because they launch from a ramp rather than a catapult system, will not have a long range or be able to carry a heavy payload.

By comparison, the Nimitz-class carriers feature a 100,000 ton fully loaded displacement, can accommodate 60 plus aircraft and since they are nuclear fueled, have long cruising endurance, O’Rourke noted.

“Some observers have referred to the Liaoning as China’s ‘starter carrier,’” O’Rourke wrote.

Fallon said of the Liaoning: “It has got a very limited capability, but it looks good, sounds good, flies a big flag. They are going to steam it around and make the best of it, but the most important aspect of it is training their people on how to use this capability. Are they going to build more? Sure,” he said.

How the nation intends to use the aircraft carrier is unknown.

It “will likely continue to play a significant role in training China’s carrier pilots, deck crews and developing tactics that will be used with later, more capable carriers,” the report said.

Abraham Denmark, deputy assistant secretary of defense for East Asia, said in a speech at the foundation that China’s rapid militarization continues with a large number of forces lined up against Taiwan.

“China is preparing for potential conflict in the Taiwan Strait as it remains the primary driver of military investments,” he said.

But observers have noted that aircraft carriers would be of little use in a conflict with Taiwan. The island is well within range of airbases on the Chinese mainland.

Fallon said China’s move into waters far from its homeland is natural for a nation aspiring to retake its place in the world order. In his conversations with Chinese leaders, they see the nation as a former global power, and the last two centuries — when it was controlled by foreign interests — as a momentary blip in its 5,000-year history.

“They are resuming, in their view, their rightful place,” he said.

Plus, they are engaged in global trade.

“They have interests around the world. Their economic engine requires fuel. Their natural resources in the main are not coming from inside China,” he said.

Seth Cropsey, director for the Center for American Seapower at the Hudson Institute, a Washington, D.C.-based think tank, said: “Although China’s current aircraft carrier cannot match the capability of an American Nimitz-class — to say nothing of the Ford [class] — there is no reason to doubt that China is capable of constructing a full-deck super carrier in the foreseeable future.”

Press reports and satellite imagery available to the public suggests that China is at least building one more carrier, and possibly a second.

The first Chinese-made carrier could be launched as early as this year, Peter W. Singer and Jeffrey Lin reported in Popular Science. Studying photos in open sources, the authors concluded that the next carrier being built is at the Dalian Shipyard and will also feature a “ski slope” launching system. They speculated that future Chinese carriers would feature a catapult launch system and be nuclear powered.

A Taiwanese government report leaked to the media said there was a third carrier being built in Shanghai.

Retired Adm. Arun Prakash, India’s former chief of the Navy and chairman of the chiefs of staff, said his country did the same thing as China by buying a Russian second-hand carrier. The main difference is that India let Russia complete the modernization work.

“You have to give [the Chinese] credit for that. They undertook this fairly challenging task by themselves,” he said.

“This is going to be a learning experience for them. Give them 10 or 15 years and they will probably get on top of it. The next carrier might be nuclear powered,” Prakash said.

Retired Vice Adm. David Shackleton, former chief of the Australian Navy, said aircraft carriers can change the perception of how the world sees China. In 1907, the U.S. Navy sent 16 battle ships and all of its supporting elements around the world, which made a big change in the way outsiders saw America as a country.

“China is using its Navy in a similar manner,” he said. Along with protecting its trade routes, the service is consciously professionalizing itself. Global deployments are difficult to do right and require new skills in logistics, intelligence and communication support that it doesn’t have to have close to home, he said.

“A navy of global reach and power projection with abilities such as possessed by America, is not built overnight. It is a long and very difficult journey with many expensive lessons learned,” Shackleton said.

The ship is only part of the equation, Prakash noted. The aircraft is the other. O’Rourke said the Liaoning demonstrated carrier-based landings with J-15 prototypes. The aircraft, allegedly reverse engineered from a Russian Su-33 carrier fighter without permission, has recently gone into serial production after about eight prototypes were used to conduct tests. While it has a combat radius of 750 miles when taking off from land, that is severely limited in carrier operations because the ramp system doesn’t give the aircraft enough airspeed and lift. That also restricts the amount of munitions it can carry.

It features domestically produced engines, weapons, radar and avionics. The program began in 2006, and by 2009 China had its first prototype.

Prakash said: “They had to do something innovative and challenging and they seem to have succeeded.”

Some of the aircraft’s harshest critics have come from within China. A 2013 article in the Sina Military Network publication criticized the J-15 for not being able to carry the types of air-to-air munitions needed to go toe-to-toe with opposition aircraft, as first reported in Defense News. Its effective range without carrier-based aerial refueling is a mere 75 miles. It also doesn’t have room for an electronic counter-measure pod. The SMN article called the Flying Shark a “flopping fish.”

For these reasons, the Chinese are keenly interested in developing a catapult launching system, analysts said.

Shackleton pointed out that China is playing “the long game.” It is rapidly boosting its Navy ship numbers and setting up a string of seaports from Asia to East Africa.

Meanwhile, projections have the U.S. Navy reducing its ship numbers throughout the following decades. This is something the Chinese know well.

China “can take as much time as it wants to reach parity [with the U.S. Navy],” Shackleton said.

What are China’s intentions with its aircraft carriers?

“I’m not sure the Chinese know the answer to that question,” Cropsey said.

There is more power in having additional hardware. The nation can have more diplomatic influence and an increased ability to shape events, he said.

“China views the last couple of hundred years as an aberration, and increasing its muscle at sea is one important form to try reversing that,” he added.

“Exactly how it’s going to be used, we’ll wait and see,” he said.

Amid a Year of Challenges, F-35C Sea Trials Progressing Well