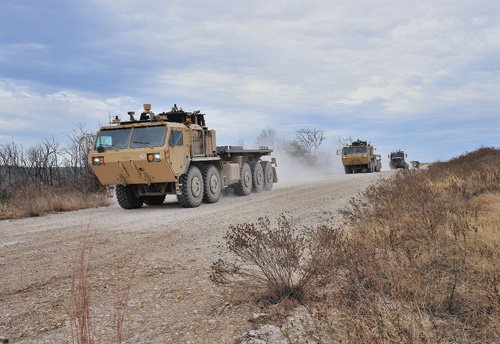 An autonomous convoy demonstration.
After years of using rapidly fielded, but temporary ground robots in its forces, the Army will soon roll out plans to make them a permanent part of its arsenal.

That not only includes small, tele-operated robots that have been used for reconnaissance, bomb disposal and a variety of other tasks, but making current vehicle fleets autonomous, said Paul Rogers, director of the Army Tank Automotive Research Development and Engineering Center.

The Army Training and Doctrine Command is working on the requirements documents while TARDEC is producing a technology roadmap. The two efforts will be completed within the first few months of 2016, he said at an Association for Unmanned Vehicle Systems International conference.

“I think you will see that we are laying out a continuum on how to get from promising technology to fielded capability. We are doing it in an informed way and a way that will hopefully shape how we are going to use technology in the future,” Rogers said.

The ultimate goal is to deploy systems that give soldiers an advantage on the battlefield, he said.
“We are looking for disruptive advantages or differential advantages. We are not looking to field ground robots,” he added.

Army thinkers believe that autonomy and robots can give troops these advantages in the field. There is an average of three service members supporting each soldier that is fighting on the battlefield. “If we can leverage autonomy and autonomy can fulfill the promise that we think it does, maybe we can reduce that ratio,” Rogers said.

The TARDEC and TRADOC documents will serve as a roadmap and provide requirements across all domains, he said. These domains include communications, space, cyber and air. They all have crucial roles to play if ground robots are to be successful, he said.

“Just leaving it at the ground domain is short sighted,” he said. Space and communications are vital for linking to robots. Cyber security must be built in to ensure adversaries can’t interfere with the vehicles. Air assets will be needed for coordinating aviation and ground robot teaming, he added.

Scott Davis, program executive officer for combat support and combat service support, said the Army in the near term will be kicking off programs for three ground robot systems, a common controller and appliqués that can be added to existing vehicles to provide various levels of autonomy.

As far as autonomous vehicles, the Army will start with tactical wheeled vehicles used for moving supplies.

The first effort will be “driver assist” features found in many consumer cars today such as indicators that tell drivers when there is another vehicle in blind spots. TARDEC is currently doing market research to inform it about the state of the art in commercial vehicles, Davis said.

The next level might be drive-by-wire features where the operator can take his hands off the wheel during long stretches then take over again during difficult maneuvers such as backing up, or in challenging environments like congested cities, he said.

After that would come leader-follower concepts where the first truck in a convoy has a driver and the others behind it are unmanned.

Possibly 30 years down the road, the goal would be to have complete end-to-end autonomy where trucks are loaded and unloaded by robots at ports and the convoys travel without any humans in the vehicles, Davis said.

The appliqués would feature open standards so new software and autonomy can be added to existing systems in an evolutionary fashion, Davis said.

The appliqués could also go on fighting vehicles and tanks. An unmanned robotic wingman would accompany other manned vehicles in a battle formation. That doesn’t mean tanks firing autonomously, he noted. Defense Department policy remains in place that a human must make the decision to fire weapons.

Rogers said: “Give me a vehicle that can be tele-operated at 60 miles per hour over very complex terrain with a stabilized weapons system, and I will show you a differential advantage.”

TARDEC recently conducted an experiment attempting such a feat, but found that it couldn’t be done digitally because of latency issues. The connection speeds weren’t fast enough. Digital cameras were swapped out with analog systems, which worked much better, he added.

Robotic vehicles operating in “complex terrain” has been an issue. TARDEC has successfully demonstrated driverless trucks and leader-follower appliqués on flat, smooth roads going back almost a decade, he said. The problem is that the roads the Army must traverse aren’t always in good shape.

Lt. Col. Cory Berg, product manager for appliqué and large unmanned ground systems at PEO combat support and combat service support, said the first round of driver assist software is just “the appetizer to the main course, which is autonomous convoy operations.”

The Army will hold an industry day sometime in the first few months of 2016 to talk about its requirements. Unlike most PowerPoint laden industry days, his office will be bringing a heavy expanded mobility tactical truck so participants can see what they will have to insert their appliqué kits into, he said.

Davis said that TARDEC must walk a fine line when it comes to writing robotic and autonomy requirements. The idea is to not be too specific, keeping it to what the Army wants to achieve and in what kind of environments.

“It takes a very long time to get through the [acquisition] process. ... Meanwhile, new technologies may come along that fit and can be incorporated,” Davis said. Engineering change proposals do allow them to add innovative technologies that come along in the rapidly advancing field of robotics.

The program executive office has also begun a “robotic enhancement program,” which allows it to purchase new technologies from robot makers and try them out in operational environments. The purpose isn’t necessarily to ultimately buy new equipment, but to let the Army know the state of the art so it can inform the requirements process. It is based on the soldier enhancement program administered by PEO soldier.

Companies twice per year can submit proposals. A council of colonels vets them and chooses which technologies are of interest. Six were chosen in the program’s first round and they will be undergoing operational tests this year.

“Having something like that is going to be critically important for us to stay on top of the latest technology,” Davis said.

The Army is also kicking off three new programs next year, including two robotic systems for mounted and dismounted troops, and a squad mission support vehicle later in the decade, Davis said.

The man-transportable robotic system mark II is envisioned for explosive ordnance disposal and other missions and can be transported in a tactical wheeled vehicle. The Army will release a request for proposals in the second quarter of 2016, he said.

An RFP for common robotic system-individual for dismounted troops will come in the first quarter of 2017. It should weigh less than 25 pounds, which includes the controller, he said.

The Army is also looking to field a common controller for these robots and small unmanned aerial vehicles used at lower echelons. Weight is the biggest physical challenge to creating it, he said. It must have an open architecture in order to link to several kinds of robotic systems and robust security to ensure that they don’t fall prey to hackers.

This isn’t the first time the Army has attempted to field a common controller, he noted.
“We’ve tried it a couple of times. It has always been a big challenge,” Davis said.

The Army is also moving out on a small vehicle, the squad mission equipment transport, which is designed to carry equipment for dismounted troops in rough terrain. Davis said it will probably come in two or three sizes. TRADOC is working on the requirements, with an engineering, manufacturing and development phase beginning about 2019 and lasting three years. They would be either tele-operated or fully autonomous. The Marine Corps is pursuing a similar system.

The Army has conducted a series of six exercises at Fort Benning, Georgia, and Fort Bliss, Texas, using squad mission equipment transport robots from six vendors to evaluate their capabilities.

Kent Massey, director of advanced programs at robot maker HDT Global, said such systems are ideal for light infantry who are expected to accomplish a 12-mile march in about three hours. A rifle company will just about fill up a C-17, which may have to land near an objective without bringing along light tactical wheeled vehicles.

The soldiers are carrying 100 pounds “and that really doesn’t work,” he said.

Squad multi-purpose equipment transport robots could fit into the transport aircraft and allow the soldiers to arrive at their objective without being exhausted from the hike.

Two of the experimental vehicles can carry 72 hours worth of water, food and ammunition along with rucksacks for one platoon. It can also have room to spare for some exportable power and a radio. Additionally, they can also carry direct or indirect fire systems as well as perform casualty evacuation, he said.

But the systems are far from ready. Massey showed a series of photos of broken or tipped over robots at the experiments. “Tele-operated vehicles have a nasty habit of rolling over,” he said.

As the experiments took on increasingly rougher terrain, half of the vendors’ robots broke down and had to be towed back, he said. Suspensions, axels and pivot points snapped.

There are no “specifications” that can adequately address these kinds of conditions, and soldiers will inevitably overload the vehicles, he noted.

“If we as an industry design these robots to the requirements, we will fail. The robots will fail in the field. They have to be so much stronger,” he said.

Tele-operated squad support robots tend to roll over because it is hard for the soldier to get a feel of where he is going.

Autonomy will be key in making these systems work, Massey said. As will be the noise factor. Some systems are louder than others, which is a problem when soldiers want to be stealthy. They prefer tracked vehicles for better mobility, but they are noisier, he added.

Despite these problems, such vehicles check off a lot of boxes for expeditionary, light infantry units. It gives them better range, endurance and lethality, he said.

Top 10 Disruptive Technologies for a New Era of Global Instability